There are to be no ties worn Saturday at the memorial service for George Richardson. He didn't like funerals, so Algonac Muskrats and Michigan State Spartans gear is encouraged.

And while some sadness is inevitable, people should be having fun telling stories of the longtime Algonac coach, who made it his mission to make sure all his athletes – whether in middle school or high school, in cross country, track, basketball or football – enjoyed themselves while under his tutelage.

“He enjoyed life, and he lived it to the fullest,” said Algonac cross country and girls track & field coach Dan Shafer, a longtime friend of Richardson’s. “George would want it to be a happy time, not a sad time. We won’t ever really be able to measure the impact he had, just because it’s so vast and over so many decades. He had a great impact on our community. To say that Algonac will miss him, that’s an understatement.”

Richardson, who was battling cancer, died on April 26. He was 76 years old and is survived by his wife of 50 years, Diane, his two children, Anthony and Lynn, his mother Martha, and his sister, Mother Maria of Jesus. The memorial service will be from 7-9 p.m. at Algonac High School, and the family has asked any expressions of sympathy take form of contributions to the Algonac athletic department.

It’s fitting that even in death Richardson is giving to Algonac athletics, as he gave more than any amount of money could cover during his life.

Richardson, a Detroit native, graduated from Michigan State University in 1963 and spent his first two years out of college teaching in Battle Creek. In 1964, he took a job as a physical education teacher at Algonquin Middle School in Algonac, and he remained in that position until retiring in 1999. He also began coaching in 1964, and his final season as a coach was the spring of 2017 when he coached the middle school boys track & field team at Algonquin.

“He was a guy, and I’ve heard several people say this, he never had a bad thing to say about any kid he taught or coached,” said Shafer, who began coaching at Algonac in 1977. “He loved kids and loved working with kids, and the kids loved him back.”

One of the main reasons the athletes loved Richardson was his way of making practices fun while still preparing them to succeed in their sport. 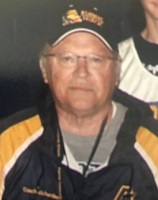 “He’s very motivating, but he makes sure not to push the young kids too far,” said 2016 Algonac graduate Morgan Beadlescomb, a four-time MHSAA Finals champion in cross country and track. “He really focuses on teaching his athletes to enjoy running rather than being serious competitors at 11 years old, making sure they don’t burn out. He was very, very good at making all of us enjoy running. All the cross country kids loved running. We’d end practice sometimes and play two-hand touch football. We were doing little things you wouldn’t expect, and we all enjoyed it and didn’t really know we were working out.”

His approach helped feed athletes into the high school programs who were ready and excited to compete.

“We had a lot of success in track and cross country, and that’s something he should get a lot of credit for,” Shafer said. “He got them enthused about the sport, but didn’t run them to death to the point they were hating it. He really pushed that enthusiasm for the sport. Winning is great, but improving and having fun, that’s the key. Those kids would come out because they liked cross country in middle school, and because they liked track in middle school. He knew his stuff, too. He could coach all the events.”

Without Richardson, Algonac’s middle school cross country program may not have continued to exist. Shafer said that when the funding for the coaching position was cut in the 1990s, Richardson continued doing it for free to keep the program alive.

“He was a very giving person,” Shafer said. “I haven’t heard anybody say a negative word about him.”

“George called me the first day of middle school practice; he said right from the get go, ‘I think he said he’s going to be your best runner ever,’” Shafer said.

“He stayed in touch, even when I was in college, and that was also something special,” Beadlescomb said. “He was always very supportive. I feel like he had some influence on everybody. He was their coach in one way or another.”

Even when he wasn’t coaching, Richardson was a constant presence at Algonac athletic events, whether it be standing along the fence during football games or volunteering his time at a track or cross country meet.

He was always there for Algonac, and while Shafer said he doesn’t know how many people will show up for the memorial service, he expects it will be a special night.

One person who will be there is Beadlescomb, who said he wouldn’t miss it despite being in the most crucial part of his track season at MSU.