KINGSFORD — The Ishpeming boys have allowed very little to stand between them and the Upper Peninsula Division 2 track & field championship in recent years.

They added another trophy to their collection Saturday by scoring 116 points.

The Hematites, who won three of the last four titles outright and shared the fourth, were followed by Iron Mountain with 102 points and St. Ignace at 63.

Senior Jonny Matson scored 36 points for the Hematites, who also have either won or tied for the title six of the last seven seasons.

That string was interrupted only in 2017 when they were runners-up to Newberry and three years later by COVID-19.

Last year, the Hematites shared the title with Norway.

“Jon has been a great leader for us, and Parker Gauthier and Hunter Smith picked it up,” said Troy Smith, who shares Ishpeming’s coaching duties with his wife Trisha. “We greatly appreciate the effort of our coaching staff (Morgan Kangas, Khora Swanson and Hailey Smith). They’re a big part of our success.

“Our numbers have been a little low, but we have a great group of kids.” 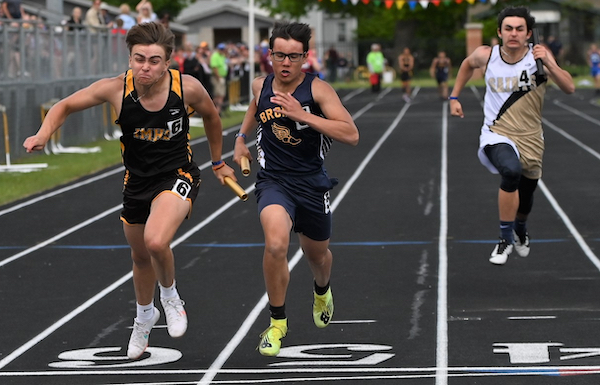 “Nick (Anderson) started real good and got us in a good spot,” said BR-H junior Vincent Martin, who ran the second leg. “We were seeded fourth. We knew the other three teams were good in the first and anchor legs. We mixed up our lineup a little and were in first going into the third leg.”

“That was a PR by three seconds,” said McLean. ‘With this being the last meet, I decided I might as well put everything into it. I think I started out all right. I wanted to get to the front right away.”