Instead, the Michigan Interscholastic Track Coaches Association Hall of Fame coach was teeing it up on a golf course in Kalkaska County.

Lober, the driving force behind Traverse City Central boys running, stepped down as cross country coach after 28 years. He’ll continue as the track & field coach in the spring - his 49th year at Central and 54th season of coaching overall.

“I’m definitely going to miss it, but I’m lucky to say that a lot of these kids (in cross country) run track so I’ll still have an association with them,” Lober said. “It’s always about the kids and that association.”

“He’s a legend,” Central athletic director/assistant principal Mark Mattson said of Lober. “The guy’s put nearly 50 years into his craft at our school. That’s unprecedented. Fortunately, we get to keep him for track.”

Still, Lober thought the time was right to make a change.

Lober experienced a taste of life without cross country last season – albeit for just two weeks – when he and his partner of 11 years, Margo Million, took a September vacation to New England.

And, as for any withdrawal symptoms in the last month, Lober’s been too busy for that to happen. He took in eight Traverse City Film Festival movies in late July and then the following week played 18 holes of golf four consecutive days with his visiting grandson and a friend.

“It’s been pretty Lober silent around (school), and I know that’s by John’s choice to stay out of the way and let Bryan Burns and his staff have that program be theirs,” Mattson said. “I’m sure that’s not easy for John because I know how much he cares for kids and how much pride he takes in our school and community. He paved the way for so many years. Nonetheless, he has the utmost respect for Bryan, who he helped put in place, and for what they want to do with the program going forward.”

Lober, and coaching companion Don Lukens, took over the Central cross country program in 1989 and turned it into one of the state’s best. According to statistics compiled by michtrack.org, Central had the fourth best program in the state in the 1990s – based on MHSAA Finals finishes – despite the fact the school was split (with West opening) in 1997. The Trojans were 12th from 2000-2009 and 11th from 2010-2016.

“Excellence is typified by a high achievement level over many years,” Lober said, “and I feel we’ve been an excellent program over the last 28 years.

“The system we established that first year (based on principles popularized by notable New Zealand runner and coach Arthur Lydiard) has proven to be a successful system. Little did Don and I know when we started working together that our talents would dovetail and create such a strong situation.”

Since 1989, Central has won 86 invitationals, eight Big North Conference titles and eight Regionals. The Trojans were runners-up in nine Regionals. Central finished second in Class A in 1996, five points behind White Lake Lakeland.

Central qualified for the MHSAA Finals the first 16 years under Lober and Lukens. That streak was snapped in 2005, but it led to one of the most satisfying seasons in 2006. 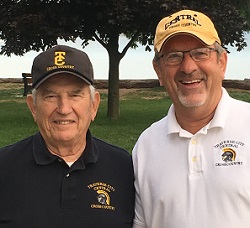 “Those kids on the 2005 team were the first not to go to states, and they banded together and came back and took third (in Division 1) the next year,” Lober said. “They were awesome. That was a special team.”

The Finals runner-up team in 1996 was special, too. In fact, Lober is reminded of it every day. That squad, after its successful season, planted a tree in Lober’s front yard. Today, it towers over the front of his property.

Lukens, also in the MITCA Hall of Fame, built his legacy as a cross country and track coach at Kalamazoo Loy Norrix before retiring at 55 and moving north. He had 32 years of service in, but his move was hastened after he accidentally “chemically poisoned” himself.

“I was staining my place and I dumped the bucket all over the front of me,” he said. “But I wanted to finish because I had company coming from Pennsylvania. The next day my knees and elbows were so swollen – you talk about pain.”

Lukens originally was told he had lupus, but a trip to the Mayo Clinic revealed it was chemical poisoning.

He was told his condition would improve as time passed, but it would be advantageous if he could retire.

“They said, ‘Remember, stress is a factor. If you don’t retire, don’t plan much until after age 60,’” Lukens recalled. “Well, that scared the dickens out of me.”

Lukens, now 83, was serving as interim athletic director at the time. In the meantime, he and his wife had fallen in love with northern Michigan and purchased property along the Platte River in Benzie County. Lukens started building their house right before the move.

“Every morning I get up, sit on the porch and look at the river,” he said. “You talk about being blessed.”

His coaching days were not over, however. Benzie Central track coach Pete Moss asked if Lukens could work with the team’s pole vaulter in that spring of 1989. In late May, at the Traverse City Record-Eagle Honor Roll track meet, Lober approached Lukens about becoming his distance coach in track. When the cross country job opened, Lober and Lukens took on that responsibility as well.

It’s a union that still exists. Lukens is assisting Burns in cross country and Lober in track.

“I think my wife is happy I’m not in her hair all the time,” Lukens said. “I enjoy working with the kids. They keep me young.”

Lober, whose track team won the Class A title in 1992, feels the same. He retired from teaching during spring break in 2000 when his wife Julie’s cancer returned. She passed in August of that year. It was in those moments afterwards, seeing the support he had from his teams, that it hit him.

“I need them more than they need me,” he said.

Now that he’s not a part of the cross country program, Lober said he’ll miss the dynamics of team building and team bonding. He’ll miss watching raw athletes develop skills they didn’t realize they had. But he won’t be out of sight totally. He’ll be there for meets, just like he’s at other school sporting events during the year. After all, Traverse City Central has been his home away from home for 49 years.

“When we named Travis Schuba our new boys basketball coach last week, John was the first one looking for contact information to congratulate him and welcome him to our staff,” Mattson said. “That’s John Lober. Traverse City Central is family for John.”

And just how long will he coach track?

“I want to coach track a couple more years because I love it,” he said. “Last year was as much fun as I’ve ever had coaching track. Plus, I want to put 50 (years) in. If I’m lucky enough to do that, I’d love it.”