KINGSFORD — The Marquette boys have been the track & field frontrunners in the Upper Peninsula all season.

They also finished the season that way by scoring 140 points in the Upper Peninsula Division 1 Finals on Saturday at Kingsford. Gladstone – which had won the last Finals in 2019 – followed with 93 points, and third-place Kingsford had 65.

“Hats off to Kingsford for putting on such a fine meet,” said Marquette coach Kyle Detmers. “We had some good performances and our seniors were good leaders. Kam Karp had a great day, and the Vanderschaaf brothers going 1-2 in the 1,600 was huge. Cullen Papin nearly won the 800, and Owen Beauchamp, Truman Langlois and Tyranon Dahlin had nice performances.”

Temperatures hovered in the low 90s with a heat index of 99, which is believed to be the hottest U.P. Finals on record. 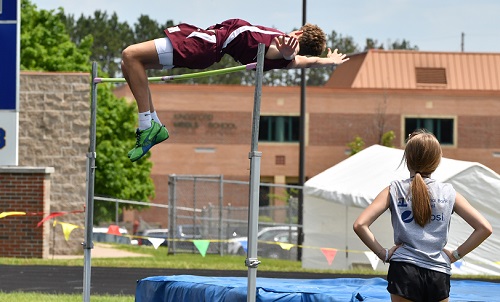 “It was great,” said Carson Vanderschaaf said. “I was really happy with my 1,600. I took a more conservative approach because of the heat. The breeze helped a little on the home stretch, but it was still hot.

“I’m really excited for cross country this summer. With a summer full of training, I think I can improve.”

Lincoln Sager added a first for Marquette in the 400 (51.81), edging Houghton’s Donovan Dueweke by nine hundredths of a second.

Douglas’s effort on this hot and humid day was eight hundredths of a second better than his winning 800 time in Tuesday’s Northern Michigan Meet of Champions at Gaylord.

“It feels great to get a U.P. Finals win. All the hard work I put in paid off.” 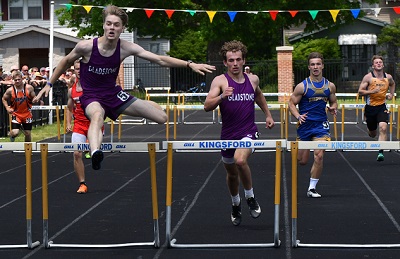 “It’s good to have that competition,” said Schultz. “We really help each other out. I was happy to get the U.P. record and tie the school record. It really helps to clear 6-8. I was tired when we got to 6-9.”

Milam previously cleared 6-6 in a triangular meet at Gladstone on May 11.

“My friend Lucas Hughes told me to keep saying to myself ‘you’re going to make it,’” said Milam. “I’m definitely pleased with my season. I set multiple records. Taking a year off (due to COVID-19) made a big difference. I had a chance to take a break. It was definitely refreshing to get track back this year.”