Seemingly out of the running for the team title, the Rams' 1,600 relay – a foursome not even running in the event's fast heat – managed a third place in the final event to earn Rockford a tie with Fenton for first place in a wild meet.

Both teams finished with 34 points. Instead of finishing as low as third place in a meet where the top eight were separated by just 12 points, Rockford earned its first Finals crown in 12 years under Martin.

"It doesn't matter how we got there," Martin said of tying for the title. "We were seeded 10th, but these kids are all about doing your own thing."

The Rams relay was comprised of three seniors in Daniel Leja, Gage Martin and Jacob Peck and junior Jacob Bissell. While they finished with a time of 3:23.84, Fenton was slowed by not having a team qualify for the final relay. It was a turn of events which left Fenton coach Anthony McMillan pacing nervously as the final race played out.

"To still do what we did was great," he said. "These kids left a legacy, a path. To bring a state title home is a very special moment. To be one of the (two) teams means a lot to us." 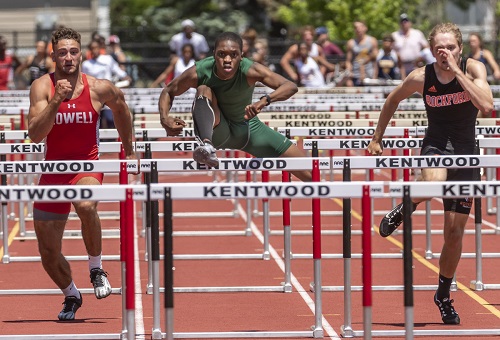 Rockford and Fenton were far from the only teams with a breath of life until the final event. Zeeland West finished third with 30 points, Ann Arbor Skyline had 28, Pinckney and Novi 25 and Dexter and Macomb Dakota 24.

While the team title was captivating to the very end, Skyline's Hobbs Kessler virtually stole the individual part of the Finals. Kessler, who became the first Michigan high schooler to qualify for the Olympic trials in 80 years, won the 1,600 (4:16.68) and the 800 (1:54.13). While those finishes weren't necessarily surprises, Kessler's ability to live up to high expectations – including amazing kicks in both events – was even more impressive.

"I know if I work out well and run my best, good things will happen. I know who I have to listen to, and the others aren't as important.  I have a good support system, so I can just go out and win."

Kessler qualified for the Olympic trials last Saturday. He said he'll think more about the future now that the high school season is completed. But he wouldn't rule out competing in this summer's Japan Olympics.

Myers said an extremely strong headwind didn't do runners any favors. But he was able to overcome the obstacle because of physical toughness, he said.

"It was a strong wind, but I just pushed through it to finish where I did," he said. "Mentally, you just keep going forward. It's all about technique; it's the arms, legs, everything." 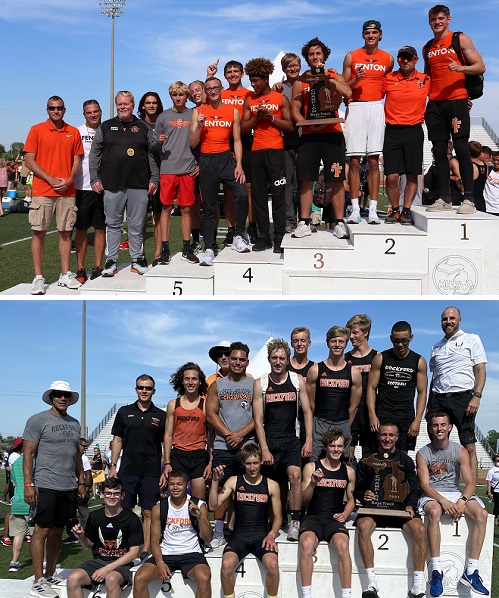 Dexter's Cole Sheldon won the pole vault (15-3) to complete an inspiring climb that included failing to qualify as a freshmen, to finishing 26th in 2019 to winning Saturday.

"It was just hard work," said Sheldon, who was seeded fourth. "It's nice being the underdog. I didn't have that great of a Regional, and I told my coach I was saving it for the Finals."

Sheldon also credited teammate Noah Schultz, who finished second with a vault of 14-9.

"That was probably the best thing that could have happened to me," Sheldon said. "He's the reason I did so well. If he goes high, I want to go higher."

Among other field event winners was Zachary Webb of Macomb Dakota, who won the high jump in 6-6. While some competitors are actually surprised by winning a state title, Webb doesn't count himself among them.

"I knew when I came in here I couldn't miss," he said. "I wanted to put the pressure on others, and I think I did that. I practice so much, I knew I could do this. I break down a lot of video. If I'm going bad, I look at the video and fix what I need to fix."

The other field event winners were Drake Willenborg of South Lyon in the discus (183-3), Levi Honderd of Holland in the long jump (22-6) and Ben Haas of Clarkston in the shot put (57-8).