But three past individual champions will return Saturday with opportunities to add to career achievements first built up before COVID-19 led to the cancelation of last season.

Gladstone’s Blake Servant and Calvin Thibault and Gwinn’s David Duvall all have won at least one Finals title and will be among those to watch as all three divisions again will be competed at Kingsford High School.

Events begin at 10 a.m. (EDT) and tickets to attend can be purchased online only at GoFan. The meets also will be broadcast on MHSAA.tv and viewable with subscription.

Below is a glance at team contenders and individuals to watch in all three divisions.

Team forecast: Gladstone is the reigning champion after a 2019 run where it broke Marquette’s previous four-year hold on the Division 1 title. But Marquette may be the team to chase again with top seeds in two relays, four individual races and shot put. Houghton was runner-up in 2018 and 2016 and is seeking its first championship since 1992. The Gremlins got three individual championships and a leg of a relay winner from junior Eric Weiss at their Regional, and he could be important stacking up in the distance races. Gladstone’s star hurdlers also should factor into the team title mix.

Brady Schultz, Menominee: The Maroons junior high-jumped 6-foot-6 at his Regional to win by two inches, and a repeat of that jump would set the UPD1 Finals record by an inch.

Calvin Thibault, Gladstone: Now a senior, Thibault won the 110 and 300 hurdles Finals championships as both a freshman and sophomore, and in addition to Regional runner-up finishes in those races two weeks ago also took third in the 200 and fourth in the 100.

Team forecast: Ishpeming won back-to-back team championships in 2018 and 2019 and has earned five over the last six seasons, but that streak could be coming to an end as Iron Mountain seeks its first title since 2000 and Norway its first since 2005. Norway could be in line for some big points with the top seeds in two field events, two relays and two individual races. Iron Mountain, however, has an advantage on depth with all four relays and 17 individual entries competing. Ishpeming is right behind with all four relays and 14 individual entries. 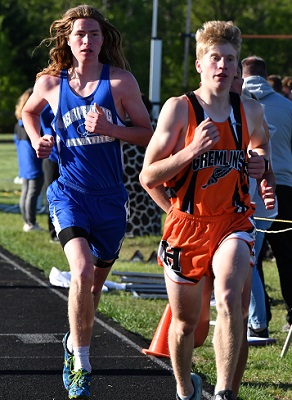 David Duvall, Gwinn: He was one of the most impressive performers as a sophomore in 2019, winning the 110 hurdles and finishing runner-up in the 300 and long jump. He’ll be a contender in those three events and as part of the 400 relay, with his 18.16 seed time in the 110 pacing the field.

Landon Sudelius, West Iron County: He took sixth in both hurdles races two years ago as a freshman, but enters this weekend seeded first in the 300 (45.36) and second in the 110.

Team forecast: Rapid River has had the most recent success of the teams listed above, with two titles and two runner-up finishes between 2015-18 and a fourth place in 2019. Dominant field events would be the Rockets’ ticket this time, while Pickford has some likely high scorers throughout the lineup. Stephenson could be in line for its first team title since 2007 with 23 individual entries and all four relays running including two that are top-seeded. Powers North Central finished only three points behind Stephenson at their Regional and also has some interesting high-scoring possibilities.

Cameron Hoornstra, Brimley: After running the 800 and 1,600 two years ago as a sophomore, Hoornstra has found his stride in the sprints and enters this weekend with the top seed in the 100 (12.0) and fourth in the 200, and he’ll also run the 400 and is fourth-seeded in the long jump.

Conner LeClaire, Dollar Bay: He got on the board with a fifth-place finish in the 300 hurdles in 2019 and returns as a senior with the top seed time in that race (43.85) and third-fastest in the 110.

PHOTOS: (Top) Gladstone's Blake Servant earns one of his four championships during the Mid-Peninsula Conference meet May 24 in Negaunee. (Middle) Houghton's Eric Weiss wins the 3,200 at the Mid-Peninsula finals with Ishpeming's Silas Broberg taking second. (Photos by Cara Kamps.)