KINGSFORD — Twelve years had passed since a Rapid River boys track and field team had been crowned Upper Peninsula champion.

The Rockets found a way to do that Saturday, however, as they edged Powers North Central 72-68 for the title. Third-place Newberry scored 48 points, followed by Felch North Dickinson with 47½ and two-time reigning champ Munising with 46.

The Rockets also had to overcome some adversity after losing junior Austin Wicklund to a knee ligament injury.

“It’s exciting to do this as a senior,” said Dan Blair, who anchored that relay and was runner-up to Munising senior Brett Hannah in the 800 and 1,600. “We needed every point, and everybody gave his best effort. After losing Austin, we needed to put a new guy in the 1,600 relay and change our order. This is a great way to end my high school career.

“The (open) 800 and 1,600 could have gone better. Brett and I have been battling since junior high, and today he ran great.”

“With this being my senior year, I wanted to do the events I really enjoy,” said Hannah. “They had me doing the 1,600 relay, so I compensated for scratching from the 400. I’m pretty happy about repeating in all three races. This became a real good day.” 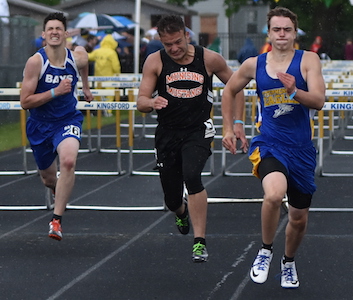 “My goal was to break 52, but it felt like I had no energy,” said Sundling. “My body felt like it was ready for a break, but our coach (John Gores) doesn’t let us miss practice. He does everything to make us better.”

“For the most part, everything was cooking on all cylinders,” said sophomore Andre James, who ran the second leg in Newberry’s winning relay and placed fourth in the 100 (11.75). “We’re really happy about winning that relay. The 100 was real fast. My start went pretty well, only I would have liked to have gotten a higher place. Overall, we did pretty well as a team.”

Eben Junction Superior Central senior Greg Seppanen and Bark River-Harris junior Iver Stenberg hooked up in a pair of tight races. Seppanan won the 100 (11.4) by 12 hundredths of a second. Stenberg then took the 200 (23.23), squeezing past Seppanen by one hundredth of a second. Stephenson’s Montel Glover was third in the 100 (11.74).