HUDSONVILLE —For the first time in school history, the Carson City-Crystal Eagles boys track & field team has claimed the title of state champion.

Carson City-Crystal finished Saturday’s Lower Peninsula Division 4 Finals with 68.5 points, 10.5 more than the closest competitor. The Eagles did it with a small group – only eight athletes travelled to Hudsonville to compete. But by the end of the day, all of them had earned the title of all-state athlete.

Junior Zane Forist got the day started off on the right foot in the field events. He won the discus with a throw of 196-5, nearly 60 feet more than the second-place finisher. He also won the shot put with a hurl of 62-4, over 14 feet more than anybody else.

Both were meet records – the discus toss breaking the 190-0 throw by Litchfield’s Jacob Patrick in 2012. The shot put bested the former LPD4 record of 58-5.25 by Ottawa Lake Whiteford’s George Flanner in 2007. And together gave Carson City-Crystal a comfortable lead heading into the track finals, helping alleviate the pressure on the rest of the team.

“When you have the number one thrower, that kind of helps,” said Eagles coach Grant Woodman. “The field events set the tone, and then we let our distance guys ease into it and it just works out for us.” 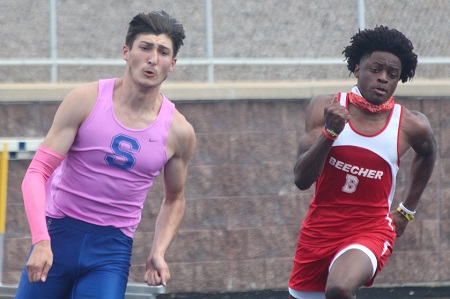 The distance runners did what they had to do to get the job done. Senior Coleman Clark earned second place in the 1,600 and the top spot in the 3,200. Those points helped keep Saugatuck at bay and put the Eagles firmly atop the podium.

Clark said that in other years, he focused on his individual performance. But this time around, he knew he wanted to give it his all for the overall team victory.

“This year, going into the season knowing we would have a top team, I knew I was going to be team-focused,” Clark said. “It feels so good to hit that top goal as a team. We knew we could do it.”

Jaylin Townsend from Flint Beecher set the standard in sprint events. He came away with an individual title in the 100  with a personal record time of 10.98 and edged Saugatuck’s Benny Diaz for first in the 200 with a time of 22.75. Townsend also helped lead the Buccaneers to a title in the 800 relay with a school record of 1:30.59.

The sophomore said that when he crossed the finish line as a Finals champion for the first time, he got excited realizing he was among the elite of the elite runners in Michigan.

“It feels great,” Townsend said. “I’m always thinking that I have to win, I have to win. … The excitement through my head is just so crazy. Only a couple people can really be state champions, and I’m one of them.” 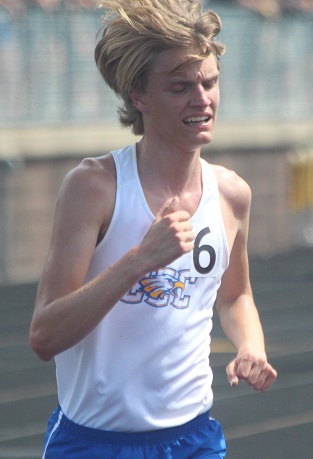 While all the excitement was taking place on the track, Wyoming Potter’s House Christian junior Jok Nhial finished first in the long jump with an incredible leap of 21-09.50, a personal record. He shattered his previous PR by seven inches, something he wasn’t expecting to do Saturday.

“It feels amazing that I’m able to do this at the state championship,” Nhial said. “I didn’t expect to make a PR today, or even break our school record. It was a great moment. I’ve worked so hard and for this to be the outcome, it feels great.”

But the true triumph of the day belonged to Carson City-Crystal. The eight athletes and the coaching staff were able to put together a season that none of them will soon forget.

“Everybody stepped up and did their part,” Forist said. “It really is a team thing. It wasn’t just a one-man show. Everybody did their thing. It’s so awesome.”