Week 8 showed the potential to end up arguably the most jaw-dropping this football regular season – and it’s fair to say the action met expectations.

As teams continued playing for league titles and positioning for one of 288 playoff spots, we saw the usual share of dominating performances – but also a couple of headline-making comebacks, an important overtime win, and more unexpectedly a handful of games determined by two-point conversion stops.

The playoff field will be selected in six days, and we’ll talk more about that soon. For now, here are many of the most intriguing results and notes from the weekend that was:

HEADLINER Grand Blanc 30, Lapeer 6 The Bobcats (8-0) are Saginaw Valley League Red champions for the first time, clinching a share of the title with their first win over Lapeer (6-2) since joining the SVL in 2018. While Grand Blanc’s offensive standouts often get much of the attention, the defense stopped a Lightning offense averaging 46 points per game – and the Bobcats now have held their last five opponents to seven points or fewer. Click for more from the Flint Journal.

Watch list Croswell-Lexington 30, Armada 14 The Pioneers (7-1) finished their first perfect run through the Blue Water Area Conference since 2012, and this win over Armada (6-2) was the closest of six league victories on the field (the seventh was a forfeit win).

Remember this one Elkton-Pigeon-Bay Port Laker 21, Bad Axe 20 The Greater Thumb Conference West finished with a three-way shared championship between these two and Reese after Laker (6-2) stopped the Hatchets (7-1) on a late two-point conversion attempt.

More shoutouts Mount Pleasant 31, Bay City Western 16 The Oilers (8-0) clinched a share of the SVL Blue title, avoiding what would have been a three-way tie for first had Western (6-2) won. Lake Fenton 42, Fenton 6 The Blue Devils (7-1) won this Flint Metro League crossover, also its first matchup with the Tigers (4-4) since 2005.

HEADLINER Detroit Martin Luther King 21, Detroit Cass Tech 15 The Crusaders (7-1) made it a season sweep over Cass Tech with this comeback win in the Detroit Public School League Blue championship game. The Technicians (5-3) led 15-0 at halftime, but King scored 21 unanswered points during the second half including the eventual game winners on Lynn Wyche-El’s interception return for a touchdown with 6:50 to play. Click for more from the Detroit Free Press.

Watch list Dearborn 13, Dearborn Fordson 10 The Pioneers (6-2) guaranteed their best record since 2016 and helped give the Kensington Lakes Activities Association East standings a final reshuffling that saw Belleville emerge as the outright champ. Fordson (6-2) and Livonia Churchill also had been tied for first entering the weekend; Churchill (6-2) lost to Livonia Stevenson 13-6.

Remember this one Redford Union 34, Melvindale 14 After three straight seasons of missing on a league title by a win, the Panthers closed the Western Wayne Athletic Conference schedule undefeated (7-1) when a win by Melvindale (5-3) would’ve created a three-way tie for first.

More shoutouts Detroit Central 30, Detroit Pershing 0 The Trail Blazers (8-0) picked up their third shutout in six games on the field this season to win the PSL Gold championship against Pershing (5-3), which hadn’t given up a point in three straight games. Clarkston Everest Collegiate 27, Royal Oak Shrine 13 This winner-take-all matchup for the Detroit Catholic League Intersectional #2 championship went to the Mountaineers (7-1), who ran their league title streak to five. Runner-up Shrine fell to 4-4 overall.

HEADLINER Hartland 21, Canton 0 The Eagles (7-1) locked up a shared KLAA West title in impressive fashion, with their fourth shutout this fall also the first time Canton (5-3) hadn’t scored a point since a 2006 Division 1 Semifinal. Hartland and Howell are co-champs, and Hartland also moved to seven wins for the first time since 2014. Click for more from the Livingston Daily Press & Argus.

Watch list Howell 21, Brighton 14 The Highlanders (7-1) went ahead for good during the game’s final minutes to clinch their KLAA West share, moving to seven wins for the first time since 2010 with their first victory over Brighton (4-4) since 2017.

Remember this one East Lansing 27, Grand Ledge 12 Even with one of the state’s most impressive schedules, East Lansing (5-3) had fallen back in the Division 2 playoff field. But this win over the Division 1 Comets (6-2) sent the Trojans back into a comfortable spot, from No. 19 to tied for No. 10 in D2 with a game to play.

More shoutouts Olivet 20, Williamston 19 The Eagles (6-2) won a matchup of league champs, as the best from the Greater Lansing Activities Conference held off a comeback attempt by the Hornets (5-3), one of three teams that shared the title in the Capital Area Activities Conference Red. Beal City 14, Sand Creek 12 A late replacement game for both became a memorable one as Beal City (7-1) held on while on the road at Sand Creek (5-3). 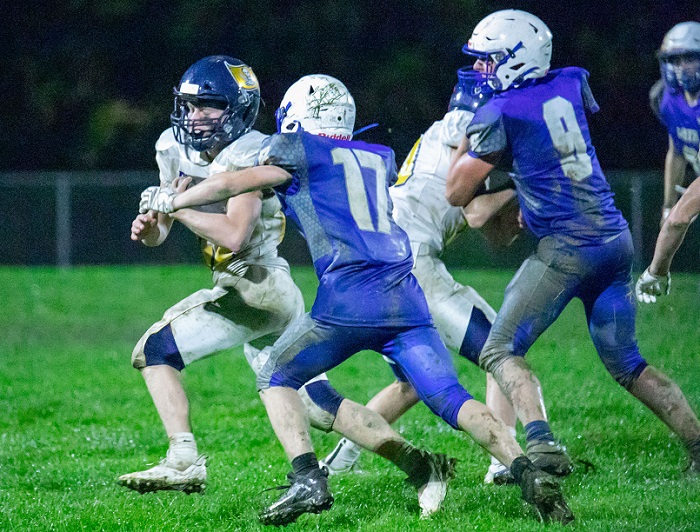 HEADLINER East Jordan 22, Harbor Springs 14 (2OT) The Red Devils (6-2) held on to set up this week’s winner-take-all with Frankfort for the championship in the Northern Michigan Football Conference Legacy division. Additionally, East Jordan (5-2) has tied its most wins for a season since 2003 and put itself in position to move into the Division 7 playoff field sitting No. 36 with a game to play. Click for more from the Petoskey News-Review.

Watch list Cadillac 10, Portland 7 Not that anyone questioned if Cadillac (6-2) would be a player again in the Division 4 playoffs next month – but this win on the road at Division 5 No. 6 Portland reinforced that the Vikings and their dynamic defense will be in the mix.

Remember this one Traverse City Central 56, Bloomfield Hills Brother Rice 13 Not only did the Trojans (7-1) reach 56 points for the fifth time in eight games this fall, but they did so against a Brother Rice team that moved to 5-3 and hadn’t given up more than 30 points in a game in nearly two calendar years.

HEADLINER Saline 42, Dexter 40 This was Saline’s closest Southeastern Conference Red game since 2016, but the Hornets managed to extend their league winning streak to 45 in clinching the championship outright. The teams traded touchdowns during the final minute, but the decider came a few minutes earlier when Saline was able to stop a Dexter two-point conversion try that would’ve tied the score at 35-35. The Dreadnaughts fell to 5-3. Click for more from the Ann Arbor News.

Remember this one Addison 52, Napoleon 34 The Panthers cemented the outright Cascades Conference championship and in moving to 8-0 have their most wins in a season since 2006. Napoleon (5-3) had given up only 98 points total coming into the weekend.

More shoutouts Jackson Lumen Christi 33, Parma Western 0 The Titans (7-2) sent Western (5-3) into fourth place and earned one of three shares of the Interstate 8 Athletic Conference championship, with Hastings and Battle Creek Harper Creek also winning this weekend to tie for first. Reading 20, Homer 6 This wasn’t for a league title, but Big 8 Conference runner-up Reading (6-2) bumped up five spots in Division 8 to No. 13 with the win over the Division 7 Trojans (5-3).

HEADLINER Constantine 32, Kalamazoo United 14 The Falcons (8-0) clinched a share of the Southwestern Athletic Conference Lakeshore championship, continuing their season-long streak of double-digit wins while handing Kalamazoo United (5-3) its lone league loss. The championship is Constantine’s third straight, and it can claim the title outright this week against winless Coloma. Click for more from FOX 17.

Watch list Battle Creek Lakeview 44, Stevensville Lakeshore 29 After a Week 7 loss to Mattawan severely hampered Lakeview’s chances in the Southwestern Michigan Athletic Conference, the Spartans (5-3) bounced back quickly to keep Lakeshore (6-2) – tied for first heading into the game – from claiming a share of the title.

Remember this one Portage Central 41, Battle Creek Central 16 Despite losing its season opener to Lakeshore, Portage Central didn’t lose again in SMAC play and clinched the title with this win over the Bearcats (3-5) – who remain in contention for a Division 3 playoff spot.

More shoutouts Three Rivers 28, Plainwell 20 Two weeks ago, Three Rivers (5-3) was one spot outside the potential Division 4 playoff field. But wins over Sturgis and now Plainwell have the Wildcats back up to No. 22 – and tied there with the Trojans (5-3). Vicksburg 35, Paw Paw 13 The Bulldogs (7-1) have moved up in Division 4 four straight weeks and now sit No. 4 with Paw Paw (5-3) at No. 25 in the same potential field.

HEADLINER Ishpeming Westwood 50, Bark River-Harris 8 Co-leaders in the Western Peninsula Athletic Conference divisions met for an intriguing tune-up before both play for league championships this week. The Copper’s Westwood (7-1) came away with its seventh game this season holding its opponent to eight points for fewer as it prepares for Negaunee this week. Bark River-Harris (5-3) will see Ishpeming for the outright Iron title and might be rooting for Westwood this week too as the Broncos need as many playoff points as possible to move up in the Division 8 field. Click for more from the Marquette Mining Journal.

Watch list Marquette 28, Traverse City West 15 Receiving one of the biggest rankings boosts this week was Marquette (6-2), which moved up 14 spots to No. 12 in Division 3 with this win over the Division 1 Titans (6-2).

Remember this one Calumet 30, Hancock 0 While most eyes will be on the Westwood/Negaunee matchup, Calumet (6-2) moved into position to claim a share of the Copper title as well and will face L’Anse to finish the league schedule.

More shoutouts Negaunee 26, Houghton 6 The Miners (7-1) moved up the Division 6 rankings for the third-straight week, up to No. 11 while also setting up this week’s matchup with Westwood. Kingsford 35, Petoskey 21 The Flivvers (5-3) received a nice bump to No. 15 in Division 5 with a solid win over the Division 3 Northmen (3-5).

HEADLINER Grand Rapids Catholic Central 41, Cedar Springs 40 After the Red Hawks (6-2) led for the majority of the first three quarters, GRCC went ahead to stay with 2:32 to play in the third – but not without a dramatic finish. Cedar Springs scored with 38 seconds left to pull within a point of the lead, but the Cougars (8-0) stopped the two-point conversion try and clinched a share of the Ottawa-Kent Conference Gold title. Click for more from the Grand Rapids Press.

Watch list Muskegon Catholic Central 24, Centreville 16 The Crusaders (7-1) moved up to a season-best No. 6 in Division 7 by getting past Division 8 then-No. 7 Centreville and scoring more points than defensively-dominant Centreville had given up over the last five games combined.

Remember this one Whitehall 34, Montague 14 This result created a three-team shared West Michigan Conference championship with these two and Muskegon Oakridge, and for Whitehall much more with context. It was the Vikings’ first win over Montague since 2014, and the league title is the program’s first since 1999.

More shoutouts Grand Rapids Forest Hills Central 31, Byron Center 0 The Rangers (7-1) clinched a share of the O-K White championship while avenging last season’s 35-14 loss to the Bulldogs, who shared the 2020 title with FHC. Hudsonville Unity Christian 69, Coopersville 7 The Crusaders (8-0) clinched a share of the O-K Blue championship and sent Coopersville (5-3) into a tie for fourth place. 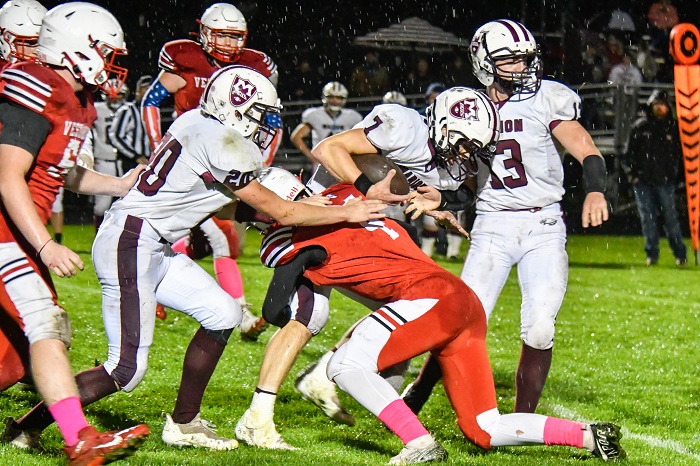 HEADLINER Lake Linden-Hubbell 36, Crystal Falls Forest Park 6 The Lakes (6-2) threw a bit of a curveball into this week’s anticipated Great Lakes Eight Conference West title decider, knocking Forest Park (7-1) out of a tie for first place and in doing so helping leader Powers North Central to a share of the championship. Although it’s out of the league race, Lake Linden-Hubbell also may end up making the playoffs in large part because of this win – the Lakes moved up three spots to No. 12 in Division 2.  Forest Park faces North Central this week and still has a chance to earn a GLEC West share. Click for more from the Iron Mountain Daily News.

Watch list Rogers City 36, Mio 28 The 8-player format is suiting the Hurons (8-0) well in their first season. Rogers City is up to No. 5 in Division 1 with this win over the Thunderbolts (6-2) arguably its best.

More shoutouts Kinde North Huron 50, Peck 18 The Warriors (8-0) clinched the outright North Central Thumb League Stripes championship, their second straight, while sending Peck to 5-3. Marion 36, Vestaburg 16 While the Eagles (7-1) moved into the No. 2 spot in Division 2, Vestaburg (5-3) fell to two spots out of the Division 1 field with similarly situated Bear Lake on the schedule this week.

PHOTOS (Top) Grand Blanc's Elijah Jackson-Anderson (2) charges into the Lapeer defense behind his blockers Friday. (Middle) A Pewamo-Westphalia ball carrier is wrapped up by a Bath defender during the Pirates' 41-0 win. (Below) A Vestaburg defender wraps up a Marion ball carrier. (Photos by Terry Lyons, Christine McCallister, and High School Sports Scene, respectively.)