The Adrian Lenawee Christian senior made The Associated Press all-state football squad as a sophomore and junior as a defensive back, but his best position probably is quarterback. If the Cougars are to make the playoffs for a school-record third consecutive season, it’s a good bet it is because of Baker’s arm.

“He’s better than he was last year,” said LCS head coach Bill Wilharms. “He had a really nice summer. He’s got a lot of confidence back there. If we can give him time, he’s going to find someone to throw it to.”

The Cougars kicked off practice this week coming off an 8-2 season and the school’s first-ever Southern Central Athletic Association football championship. Their season ended for the second straight time with a loss to Ottawa Lake Whiteford, but with a host of returning skill players – Wilharms counts 11 potential pass receivers for Baker – Lenawee Christian has high hopes for this fall.

“I think it’s going to be a great season,” said Baker, a fourth-year varsity player. “This group of guys are really close, very tight-knit. Everyone is working hard so far. Our coaches are pouring everything they have into working with us.”

Baker’s stats were fantastic last season. On defense, he counted six tackles for loss among his 73 total stops to go with one sack, two interceptions, five pass-break-ups, and he recovered a fumble. On offense, he rushed for 419 yards, averaging nearly five yards a carry, and passed for 1,618 yards and 22 touchdowns. He completed 65 percent of his 204 passes. And, just to show how he almost never comes off the field, Baker also averaged 30.1 yards on his 16 punts.

“If he has time in the pocket, the defense better be able to cover about 50 yards,” Wilharms said. “We’re going to use all of the field.”

Baker shared the starting quarterback duties as a freshman and grew into the starting signal-caller as a sophomore. Last year he was the leading passer in Lenawee County. This year, Baker will target several familiar receivers, as the Cougars welcome back five of their top six pass-catchers from a year ago.

“I’ve been throwing the ball to these guys for four years now,” Baker said. “I have a connection to them. I know where they are going to be. It doesn’t matter who gets the ball or who I throw to. I trust all of them.”

Another key receiver on this year’s Cougars squad will be Landon Gallant, the backup quarterback who will get on the field in one of the receiver slots for Wilharms. 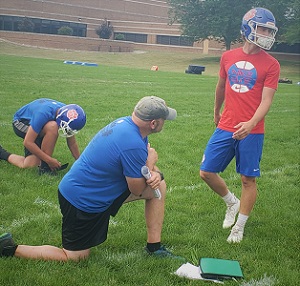 “I didn’t get him on the field as much as I would have liked to last year because he was my backup quarterback,” Wilharms said. “He’s going to play this year. He’s probably one of the fastest kids in Lenawee County, but he doesn’t do track because he’s a golfer.”

Chesser is for sure one of the fastest in Lenawee County. He finished fourth in the 200 dash at last year’s MHSAA Lower Peninsula Division 4 Finals. He’s a running back but figures big in the Cougars’ pass offense.

“He’s a great running back,” Baker said. “Coach says we are going to be more of a 50-50 team this year with running and passing.”

Wilharms said he spent a lot of the summer with Siena Heights University football coaches learning some ins-and-outs of the run-pass option offense.

“Baker is the kind of kid that if you give him the box, he’s going to take off,” Wilharms said. “If you don’t, he going to throw on you.”

Over the past two seasons, he’s passed for more than 3,000 yards, more than 40 touchdowns and made 150 tackles.

“I enjoy playing both positions,” Baker said. “On offense, I like to try and lead the team, to get the ball to as many different guys as I can. I want to distribute the ball and just drive down the field. On defense, I have my role and I like to tackle.”

Baker, 18, is used to staying busy in a variety of roles. He grew up on a 500-cow dairy farm in Clayton, located just south of Adrian.

The family grows hay, corn and soybeans. Baker loves being raised on a farm.

“I’ve been working with my dad on the farm since I was little,” he said. “It’s what I’m thinking about going to college for.”

Baker said he expects to be more of a team leader this fall. He was named one of the captains Thursday.

“When I was younger, the older guys we had did a lot of teaching,” Baker said. “Now that I am a senior, I try to do that for the younger kids. I’m hoping to be more of a leader for the team. I have a lot of experience, and I’ve been in a lot of different situations.”

Wilharms said the Cougars are excited for the season, especially after playing with only three seniors during the 8-2 run last year. Last year’s youth means this year’s squad knows about winning.

“They’ve taken their lumps and have had some success,” Wilharms said of the class of 2020. “They’ve got some unsettled things they want to take care of. They are focused on getting the job done this year.”