DETROIT – Lucas Dunn just wanted to get the snap down.

After throwing an MHSAA Finals-record six touchdown passes Friday, the Chelsea quarterback would only have the ball in his hands momentarily on the final play of the game. But he knew if he handled his split-second duties, his friend Hunter Shaw would handle the rest.

“Just get it down,” Dunn said. “It was a shaky snap, but we practice special teams probably more than anybody in the state. We pride ourselves on it, and it’s come up big for us this postseason, and it showed there.

“(Shaw) is my dude, he’s one of my best friends, I love the dude. I have all the confidence in the world with him. He's a competitor, he’s confident, he’s composed, and he deserved that.”

Dunn handled the snap and Shaw drilled a 33-yard field goal to give the Bulldogs a 55-52 victory against Hudsonville Unity Christian in a dramatic Division 4 championship game at Ford Field.

“I just was like, ‘We’re state champs,’” Shaw said. “Obviously this team (Unity Christian) set the state record for most points (in a season), they’re a great team. Our defense showed up at the end, and we came back and won it. We’re state champs.”

The Bulldogs (14-0) trailed by three scores in the fourth quarter, but came all the way back to claim their first Finals title in a game that saw multiple MHSAA 11-player championship game records fall. Five of Dunn’s touchdown passes went to Lucas Hanifan, setting a record for receiving scores in a Finals game. The combined score snapped the record for combined points set by New Lothrop and Madison Heights Madison in 2018 (New Lothrop won that Division 7 Final, 50-44). Chelsea’s 55 points were one away from tying the record for a single team in a Finals game, and Unity Christian’s total ended up fifth all-time.

“It was ugly there, but you know what, we continue to fight every week,” Chelsea coach Josh Lucas said. “We never, ever quit, and that’s what tonight is about. It’s a high school game, you’ve got 16, 17, 18-year old kids, and no one wanted to win the game at the end – we turned it over, they turned over. Hats off to those guys, they’re a great team, but tonight the ‘Dogs are a little bit better, so we’re excited to be state champs. We’re going to have that trophy for one year, and that’s how we’re going to celebrate, for one whole year.” 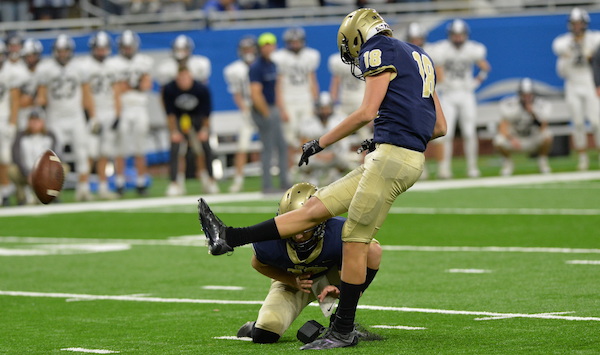 Chelsea trailed 52-31 early in the fourth quarter, as Cameron Chandler scored his third rushing touchdown of the game for Unity Christian.

The Bulldogs responded with three touchdown passes from Dunn to Hanifan (21, 29 and 16 yards), with the last one coming with 4:43 to play after Braden Watson had recovered a fumble on the Unity Christian 19-yard line.

“It’s been a wild ride, just so many emotions,” Dunn said. “I lost my grandma a week and a half ago, right before the Country Day (Regional Final), and she was looking over me tonight.”

From there, the teams traded three turnovers, with Watson recovering another fumble with 2:23 to play, Drew Chandler getting the ball back with an interception with 1:11 to play, and Regan Plank giving the ball to Chelsea for good by recovering a fumble with 46 seconds on the clock at the Unity Christian 35.

Three plays later, Chelsea set the ball up in the middle of the field and let the clock run down to three seconds to give Shaw a chance to end it with one kick.

“Peashooter,” Lucas said. “He’s a straight dog. He’s done that all year. I think he’s got two misses all year, and those are on bad snaps or bad holds. He hadn’t missed one all year, so I knew if we got to the 20, 25, he had a chance to make it in. He’s a dog, man. That’s what dogs do, they step up when the big plays come.”

Unity Christian’s uptempo straight-T offense was unstoppable all season, and it remained that way through three quarters Friday. It finished with 803 points on the year, breaking the 11-player record of 774 set in 1999 by Muskegon Orchard View.

“(The championship) is why we came today, not for that stuff, but we came to get that trophy,” Unity Christian coach Craig Tibbe said. “It hurts right now. It’s hard to watch those seniors. When you spend that much time with a group of guys. Our prayers are for them that they’ll remember this in a good light at some time.”

While the end of the game was euphoric, Chelsea couldn’t have asked for a better start, as it made a 10-play, 80-yard opening drive look easy, and capped it off with a 33-yard touchdown pass from Lucas Dunn to Lucas Hanifan. On Unity Christian’s first play from scrimmage, Chelsea’s Jason Skoczylas forced a fumble that was recovered by Carson Gray, giving Chelsea the ball at the Unity Christian 25. The Bulldogs cashed in with a 5-yard touchdown pass from Dunn to Cole Munson to take a 14-0 lead.

From there, Unity Christian (13-1) took better care of the ball and did what it’s done all season.

Ethan VanOtterloo scored on a 19-yard run to put the Crusaders on the board, and Jayden DeVries hauled in a 25-yard scoring pass from Cameron Chandler two minutes later. Two-point runs from Chandler and Micah Bush had the Crusaders in front 16-14 before what began as a disastrous first quarter had ended.

Early in the second quarter, the Crusaders made history. Drew Chandler scored on a 39-yard run, and Cameron Chandler’s two-point run made it 24-14, pushing Unity Christian beyond the scoring record. 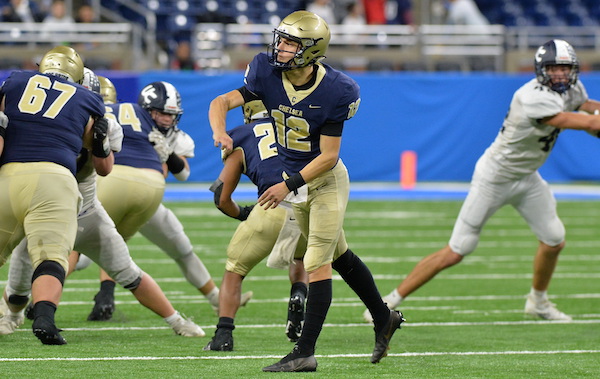 Of course, the Crusaders weren’t done, scoring touchdowns on either side of a 26-yard field goal from Shaw to take a 38-17 lead into halftime. Cameron Chandler scored on a two-yard run, which was set up by an interception he had returned to the Chelsea 9-yard line. After the field goal, he found Drew Chandler for a 27-yard touchdown pass, capping off a 75-yard drive that took just 1:15.

Unity Christian had the ball for just 5:31 in the first half, but averaged 12.2 yards per play.

The Crusaders started the second half much like they ended the first, as Cameron Chandler scored on a 29-yard run in the first minute of the third quarter. That made the score 45-17 – a 28-point deficit that set the Bulldogs up to set the Finals record for largest comeback.

Chelsea responded with a pair of scoring drives, one capped by a 3-yard run from Trenton Hill, and the other an 11-yard pass from Dunn to Hanifan.

Hanifan finished with 139 yards on nine catches, while Dunn had 308 yards on 25 of 36 passing. Hill led the Bulldogs’ rushing attack with 149 yards, and Robert Tyson led the defense with eight tackles.

Friday’s Final was the third-straight win clinched by Chelsea during the closing minutes. The Bulldogs defeated Detroit Country Day on a blocked field goal returned for a touchdown during the final minute of their Regional Final, then stopped Freeland less than two yards short of the end zone late in last week’s Semifinal victory.