DETROIT – It didn’t take long Friday for the Centreville defense to prove its season statistics were no fluke.

The Bulldogs stuffed Ubly on a 4th-and-short at midfield on the first possession of the MHSAA Division 8 Football Final, setting the tone for a dominant performance in their 22-0 victory at Ford Field.

“The defense played hard today,” Centreville senior defensive end and fullback Jared Spencer said. “I think we went all out – our seniors went all out just because it was our last game. Our first time making it to state, so I just think our defense, we were ready for the game.”

The title is the first for the Bulldogs (11-0), who had never won a District title in the sport prior to this season. While it didn’t look like it to those observing, coach Jerry Schultz said the nerves were certainly there pregame.

“If they’re going to say (they weren’t nervous), then they’re lying,” said Schultz, who is in his first year leading the program. “I could see it on their faces that they were nervous, especially this morning. That’s why we got on the field so early … we went and ran routes, I wanted them to just throw the ball around. As we told them, it’s 100 yards. Even I walked out here – I've never been here before, I’m actually a Packer fan – but just walking out here, it’s awesome.”

The 11 wins are a school record, despite the regular season being shortened by three games. The program was in the postseason for the third straight year, but just the seventh in school history.

“All the offseason work in the weight room and all the conditioning – everything that we had done since we were freshmen, it’s the best feeling to have to come in as a senior (and win) with this group of guys,” senior quarterback and safety Sam Todd said. “So, coming out on top as a senior, it doesn’t get better than that.”

Centreville was dominant throughout the year, with only two of the 10 games it played – its Semifinal was won by forfeit over Clarkston Everest Collegiate – being decided by single digits. That effort was led by a defense that had seven shutouts and allowed 29 points on the season.

“Just buying into the defense,” Spencer said when asked to explain the success. “It’s been the same defense since (defensive coordinator Trevor Haas) has been here. We’ve had the same players since freshman year, so I think we just had that bond to keep it tight.”

The Bulldogs held Ubly (9-3) to 142 yards of total offense, but 103 of those came on second half possessions when they had already built a 22-0 lead. Ubly was held to 24 yards in the first half, and didn’t record a first down until there was 3:54 to play in the third quarter. 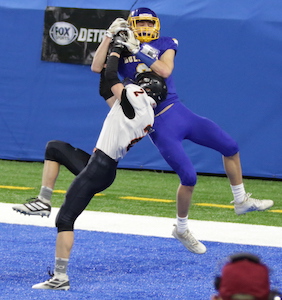 Jacob Spencer led the Bulldogs defense with 10 tackles, while Ethan Brownridge had seven. Tristan McElroy had an interception in the end zone, which ended Ubly’s best drive of the day.

“One thing that they do is they have that angle front,” Ubly coach Eric Sweeney said. “Four years ago, (former Centreville coach) Tyler Langs coached at (Unionville-Sebewaing) and they’re still running his defense. So, it’s not something we haven’t seen, but we knew it was going to be tough because when you’re trying to run a trap and they’re angling those guys up front, you have to do some different things. They flew to the ball. Their linebackers came downfield. It was nothing we didn’t expect, but I kind of thought we’d block it better, but we didn’t. I thought they played incredible defense.”

When the Centreville defense wasn’t on the field stifling the Bearcats, the offense was giving it plenty of rest. The Bulldogs’ ball-control attack chewed up clock, with nearly 30 minutes of possession to Ubly’s 18. They ran the ball 42 times for 156 yards, and made big plays in the passing game when needed, as Todd was 6-for-7 for 130 yards and a pair of touchdowns, both to junior receiver Tyler Swanwick.

Todd also led the Centreville rushing attack with 70 yards and a touchdown on 19 carries.

“I think our biggest problem like I was saying before, we like to play ball-control offense, and that’s what they did,” Sweeney said. “When they needed a big play, they got it. When we only run 10 plays in the first half, that’s not ball-control offense. Personally, I thought our defense played very well, but our defense never got rest, because we played bad offense. We knew (Todd) was an excellent football player. There were no surprises there.”

Todd’s first score came on a 1-yard run midway through the second quarter. The fourth-down play was nearly blown up in the backfield, but Jared Spencer had a big block to help his quarterback get the edge.

Swanwick made a pair of big plays on the second scoring drive, catching a deflected pass for a 31-yard gain, setting his team up at the 20-yard line with nine seconds to play in the half. On the next play, Todd found his top target with a well-thrown jump ball in the end zone, and the Bulldogs took a 16-0 lead into the half.

The Bulldogs all but put the game away with their first drive of the third quarter, eating up 7:46 on the clock, and finishing the drive off with a 12-yard pass from Todd to Swanwick.

Carson Heleski led the Bearcats in his final game, recording 16 tackles, including 1.5 for loss. He also had a team-high 67 rushing yards.