It would have made sense if this were a transition year for Davison football.

The Cardinals have just six seniors on this season’s team, four returning starters on defense and five on offense – including two who were playing different positions last fall – and graduated 2018 Flint Area Player of the Year, quarterback Cannon Hall.

As expected, after two games, Davison is … possibly better than a year ago?

The Cardinals, who finished 7-3 last season, are tied at No. 6 in the latest Associated Press Division 1 poll, sitting at 2-0 with big wins against Fenton (54-27) and Bay City Western (69-13). And nobody in the locker room is surprised by it.

“I feel like all of the work we put in the offseason as a group, we kind of expected this outcome,” junior quarterback Brendan Sullivan said. “The mindset that we have at Davison is that no one is going to outwork us. And that work we put in during the offseason gave us confidence coming into the season.”

Sullivan is a major reason for the Cardinals’ early-season success. The quarterback-turned-receiver-turned-quarterback has thrown for 547 yards and nine touchdowns over two weeks. In Week 2, Sullivan threw for 283 yards and five touchdowns – all during the first half.

While those outside the program wondered how the production of Hall would be replaced, the people inside were confident Sullivan was up to the job.

“In 14 years of coaching, he’s the best quarterback I’ve ever been around,” Davison coach Jake Weingartz said. “Last year, he started at wideout for us, and he was all-league at that. This year, he’s worked very hard in the offseason. We knew how good he was, and obviously other people probably did not. He’s not just a thrower, either. We haven’t had to run him a lot, but in Week 1, he carried it for 80 yards and a touchdown.”

Weingartz believes Sullivan is a Power 5 conference Division I college prospect, and notes that his current lack of offers comes from the fact he hadn’t been a varsity starter at the position until this season. The 6-foot-4, 190-pounder does hold a basketball offer from Saginaw Valley State.

“It’s crazy to see how he doesn’t have any offers,” said Davison senior linebacker Logan Pasko, who is committed to Youngstown State. “He brings the passing aspect to the offense. Cannon was a good thrower, but (Sullivan) really brings accuracy and a deep threat. If he was a Madden player, he’d be 99 overall.”

Sullivan’s favorite target this season has been Latrell Fordham, who has caught 10 passes for 248 yards and five touchdowns to lead the team. Sullivan has spread it out, though, as he’s completed passes to seven receivers. A.J. Terry (two), Gabe Smith and Payton Pizzala have each caught a touchdown pass. 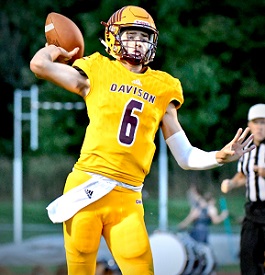 The Cardinals are averaging 230.5 yards per game on the ground, led by Caleb Smith (145 yards, two TDs) and Carter Cryderman (121 yards, 1 TD). They’re running behind a completely retooled offensive line, which was another major question mark coming into the season that appears to have been answered.

Junior Lucas Edgar is the only returning starter on the line, and he moved from tackle to left guard. He’s joined up front by sophomore Isaac Norton, junior CJ Brady, senior Cam Hunt and junior Yousef Dukuly. The group still has work to do, but has impressed thus far.

“Obviously, they’re all really young, and we have a lot to improve on, which is exciting for our staff to know that group has only played two games together,” Weingartz said. “Essentially, they’ve really only played two halves of football.”

With just six seniors, the other lingering question about the Cardinals would have been leadership, but that’s been handled as well.

“(The junior class has) been pretty strong, but all credit to those six seniors leading that class and leading us to where we are right now,” Sullivan said.

Pasco, who has paced the defense with 17 tackles through two weeks, said the team doesn’t need much leadership, because “it’s just there.” He’s not afraid to speak up when he has to, though.

“For me and Caleb Smith, we’ve been waiting for this moment since our sophomore year,” Pasco said. “Now that it’s here, it feels like the easiest thing. Whenever something needs to be said, we know that someone is going to step up and say it.”

The Cardinals showed their maturity right away, dominating a veteran-laden Fenton team that has high hopes of its own this season, and doing so with a weather delay that forced the game to be played over the course of two days.

“I think we’re going to be prepared,” Pasco said. “We stay ready so we don’t have to get ready. All of us know what we have to do and what our jobs are. We don’t want any pushovers on our schedule. We want to go out of our comfort zone and really show the state what we have to offer.”

PHOTOS: (Top) Davison defenders bring down a Fenton ball carrier during their Week 1 win over the Tigers. (Middle) Cardinals quarterback Brendan Sullivan locks on to his target. (Photos by Terry Lyons.)