MIDLAND — When Midland Dow football players looked at the playoff accomplishments of past Chargers teams, it felt like they were getting a lesson in ancient history.

There was the 1976 team that won the MHSAA Class A championship back when there were only two rounds in the playoffs. There was the 1997 squad that reached the Class A title game, winning three times in the postseason before losing to Farmington Hills Harrison at the Pontiac Silverdome.

For a program as consistently solid as Dow, it seems strange that only two teams in school history were able to win more than one playoff game.

"Sometimes it's matchups, sometimes it's getting a couple breaks to go your way," Dow coach Jason Watkins said. "When you get to this round of the playoffs, all the teams are going to be good."

So far, none of the teams in their path have been better than the Chargers.

They have made a task that has been difficult for past Dow teams look easy, winning 42-7 over crosstown rival Midland in the first round before beating Fenton, 41-14, in the District championship game.

"It's a big win for the development of the program," Watkins said after eliminating Fenton for the second time in three years. "Since 2010, this is our fourth trip to this round; we came away empty each time. It's nice to be able to finish that and get that District championship. It's a good landmark for us. Let's try to grow the program."

The 10th-ranked Chargers (10-1) will travel to second-ranked Walled Lake Western (11-0) on Saturday to play for the Regional championship.

"It's awesome," Dow junior quarterback Bruce Mann said. "We're gonna be on the board for a long time. People are going to be able to see us and remember us."

It hasn't been a lack of opportunities that has made this season's achievement so rare for Dow. Beginning with the unbeaten 1976 MHSAA championship team, Dow has 30 winning seasons in the last 40. The Chargers have made the playoffs nine times in the last 19 years.

They won their playoff opener each of the past two years and in three of the previous five years, but had their seasons end in the second round.

"It feels great," Dow senior receiver Justin Cook said. "I've been on two losing teams in the District Finals the past two years. The third time's the charm, I guess. It feels really good to finally get the (second-round) win. We're clicking at the right time. We're getting better each week."

Those currently wearing the green and gold of Dow are mindful of those who went before them, laying the foundation for such a strong program.

"It's huge for everyone that is involved, all of the past classes who didn't make it this far or got beat at this step," senior receiver Mike Robb said. "It's a big deal." 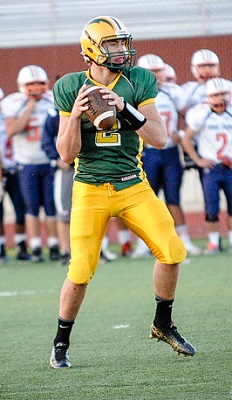 The season didn't begin like one that was shaping up to be special. The Chargers lost their opener to Mount Pleasant, 34-20. Not that there's any shame in that — the Oilers are 9-2 and still alive in Division 3.

In that game, Mann had only 26 yards of offense in the first half, as Dow fell behind 21-0 by halftime. He had 281 yards in the second half — and hasn't slowed up since.

It was Mann's first game in a Dow uniform after playing varsity as a freshman and sophomore for Bay City Western, where his dad, also Bruce Mann, formerly was the coach.

Led by Mann, the Chargers have scored at least 41 points in each of the last five games. Over that span, he is 81 for 109 (74.3 percent) passing for 1,451 yards and 24 touchdowns. For the season, he has 35 touchdown passes and only four interceptions in leading Dow to 10 consecutive victories.

"Coming into Dow, I had a bunch of friends, so it didn't take long to jell," Mann said. "It was just me calming down and realizing I'm not the only player and I have 10 other teammates behind me helping me succeed."

Mann has spread the wealth, throwing 11 touchdown passes to Robb, and nine apiece to Cook and Devontae Stine.

"Bruce has been picking up the offense each week," Cook said. "He's playing out of his mind. Every week, he's getting better. You can tell by the way he plays. He doesn't turn the ball over anymore."

Robb, the team's most dangerous receiving weapon, has become a dual threat in recent weeks.

"Right time, right place," Robb said of his newfound knack for picking off passes. "I love playing football. Wherever coach wants to put me, that's where I'll play."

"He's always been a special teams and offensive player for us," Watkins said. "We only moved him up to defense two weeks ago. It's something we saw in the scheme of things and the teams we were playing against. There was an opportunity to use his athleticism and some of his natural instincts. He's been on a pretty good little run the last couple weeks."

The same could be said for the Chargers as a whole, as they attempt to further enhance their legacy.

PHOTOS: (Top) A collection of Dow defenders makes a tackle during a win this season against Flint Powers Catholic. (Middle) Chargers quarterback Bruce Mann has thrown 35 touchdown passes this fall. (Click for more from HighSchoolSportsScene.com.)