GREENVILLE – Deckerville sophomore Ryan Stone had serious doubts about playing on the varsity team this year.

Stone thought he was better suited for the junior varsity. But following Friday night's MHSAA 8-player football championship game, everyone in the city of Deckerville is glad he opted for the jump to the next level.

The scrawny 5-foot-8, 140-pound Stone made perhaps the biggest play of the game as the Eagles survived a late rally from Bellaire to pull out a 14-12 victory at Greenville High School's Legacy Field.

“I was lined up and saw him coming around the corner,” Stone said. “I was hustling to him, hoping I could get him before he crossed the line. I just got to him.”

On Friday’s game-saving play, Stone popped out his right shoulder and laid on the turf for several minutes while athletic trainers tended to him.

He eventually stood up and walked gingerly to the sidelines.

“I thought that was amazing,” said Deckerville senior fullback Chris Wolfe, who rushed for 108 yards on 20 carries and scored a touchdown.

“To put his body at risk to stop a two-point conversion for us not to go into overtime – I thought that was amazing to help our team like that.”

Deckerville coach Bill Brown wasn't surprised to see Stone put himself in harm's way for the benefit of his team.

“He has made big plays for us all year, and it takes a lot of heart and guts to make that happen,” he said. “This whole team is just like him, and what a heck of a play. He's one of those kids who thought he might not want to come up as a sophomore, but he came up, and what a great addition to our team.” 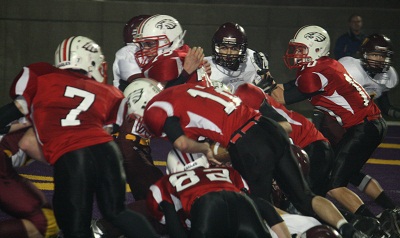 Stone also came up with a key interception in the third quarter, and scampered 23 yards for a touchdown on the Eagles' ensuing possession that put them ahead 14-6.

“It's my sophomore year, and to already win a state championship is pretty amazing,” Stone said. “I wanted to stay on the junior varsity this year because I didn't think I could make it on the varsity very well, but I think I did pretty good.”

Stone's effort was almost for naught, as Bellaire recovered an onside kick and threatened in the final seconds.

But Deckerville's defense smothered the run on the game's final play to preserve the win.

“We didn't spike it down there because I live by the philosophy of, let's catch them so the defense can't get set,” Bellaire coach Ron Bindi said. “We hit a big play earlier with that running play, and it just didn't work out.

“The kids have played like this all year. With only 13 of them, they are always outnumbered, but there is no quit in them. We just didn't get it done at the end this time.”

Trailing 14-6 late, Smith tossed a long bomb to Villafane, who hauled in the 52-yard score and trimmed the deficit to14-12.

The Eagles were inside Deckerville's 30-yard line five times, but only scored once on a 1-yard quarterback keeper by Smith in the final minute of the second quarter.

Deckerville closed with a 12-1 record en route to the title. Its lone loss came in Week 2 against Cedarville.

“Ever since Week 1, it has been a great ride,” Wolfe said. “We learned a lot of things. We learned responsibility, dedication and how to become a team.”

Said Brown: “It means a lot to the program, our community and all the alumni who have played before us and busted their tails. We just happened to have a great year with a great group.”