Not that he wants or needs it.

“I worked out twice a day throughout the summer because I knew I would be playing every down,” the do-it-all senior said. “I think I’ve sat out two plays the whole season. One, I had a 60-yard touchdown, then I ran in the two-point conversion, and I’m the kicker, so they didn’t have me kick (the ensuing kickoff).

He’s had significant interest from others, including Purdue, where he plans to take an official visit in the coming weeks.

His combination of size (6-foot-3, 228 pounds) and athleticism (a 4.56-second 40-yard dash and a 40-inch vertical jump) make him an obvious DI candidate, and in case you wondered if those numbers were inflated, his Nike SPARQ score (rating his athleticism based on a series of fitness tests) of 127.74 ranks him No. 10 in the nation among all prospects and No. 1 among tight ends.

“The first thing that comes to mind on Ben is he’s a freak athlete,” Garber coach Jake Coquillard said. “I think being at a small school and in mid to northern Michigan doesn’t do him justice or get his name out there the way other people would downstate. I think he would have more schools on him, to be honest.

“But his work ethic is absolutely off the charts. He has a constant will to be better, which as a coach, I don’t know if I’ll ever have another kid that works and wants to have perfection as much as him, and that means in the game of football, in the weight room or in life. He’s a special, special young man.”

Coquillard believes VanSumeren’s greatest potential is on the offensive side of the ball, as he fits the mold of a prototypical receiving tight end. But defense, which is fairly new for him this season, has come pretty naturally, too.

“A lot of the big Power 5 schools have wanted him for defense,” Coquillard said. “He didn’t play much defense last year and he didn’t even have film. But they look at him at 6-3, 224 to 230 and they’re thinking backer. This year he is playing outside linebacker for us and doing a good job. He’s definitely not afraid to come get you.”

Playing at the Division I college level is something VanSumeren has known he was capable of since the sixth grade – not because of anything he had done, but because it was something he decided he wanted to do. 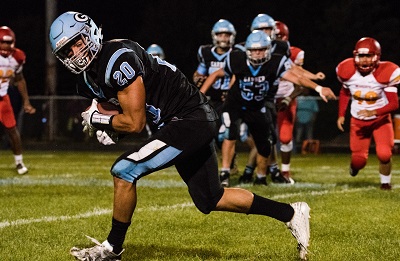 “It was just something I wanted, and once I get something in my head that I want, I’m going to work endlessly to get there,” he said.

His first offer came from Western Michigan University this past February, and he committed to sign with the Broncos shortly after. He de-committed in the spring after recording his jaw-dropping SPARQ score, telling MLive at the time that he wanted to evaluate all of his options and be up front with the Western coaches.

Offers started trickling in throughout the spring and summer, and college coaches were going out of their way to find the 550-student school in Bay County and pay him visits. There they were able to watch him on the baseball diamond, where he’s a standout centerfielder.

“It’s really humbling to know that six months ago I was without any offers or much college attention,” VanSumeren said. “Now I have the No. 1 SPARQ score and people are looking at Essexville Garber -- coaches are coming in asking where Essexville is.”

VanSumeren and Coquillard also have been proactive in contacting college coaches.

“We’ve contacted about every coach and program that we possibly could,” Coquillard said. “I think him being the No. 1-rated tight end as far as scores go at the Nike Opening (combine) put his name out there. We sent tape or tried to get with (coaches) on the phone to get his name out there. He is from a small school. We always say that if you’re good enough, they’ll find you. But sometimes they get lost in the shuffle, too.”

With him trying to raise his profile, one could forgive VanSumeren for focusing solely on tight end and linebacker in his senior season. He’s done anything but that, however.

He’s played quarterback and running back for the Dukes (1-2). He’s also the kicker and the punter.

“That’s the type of person he is,” Coquillard said. “A couple games ago, we had him at quarterback and running back to try and get him the ball. He even said, ‘Coach, I think you need to move me around. I’m a team guy, and we need to get the other guys the ball, too.’

“He’s a very unselfish young man. He’s about the team, and he loves playing all the different positions. As athletically gifted as he is, I think it’s an awesome thing on his part to be willing to do that.”

In VanSumeren’s eyes, moving from position to position is a win-win.

“I’m just about the team, and if the team is going to benefit from it and if the defense can’t adjust, that’s what I’m going to do,” VanSumeren said. “And I think colleges like seeing that. I think versatility is big for colleges.”