GAYLORD – Gaylord High School is in the midst of a football revival.

Gaylord St. Mary is hoping it can say the same in a few years.

Gaylord High is 4-0 and, among various media polls, ranked as high as No. 4 in Division 3. The senior-laden Blue Devils will be put to the test Friday, facing another unbeaten, Traverse City Central, on the road.

St. Mary, challenged by numbers, is 0-4. With just five seniors on the 25-player roster – there’s no junior varsity team – the Snowbirds are building for the future behind a "solid" sophomore class.

"We realize we're behind the eight ball in terms of numbers," St. Mary coach Kevin O'Connell said. "But we're very encouraged about what's coming up.

"We start six to seven sophomores on each side of the ball, plus a freshman. We're very young. We're a JV team playing on Friday night. We're OK with that because over the next two or three years we anticipate being very competitive."

Gaylord coach Will Cleaver can relate to that. Two years ago, in his first season back after a five-year hiatus, the Blue Devils started 0-8 before closing the campaign with a win over Alpena.

"That was a grind, a tough season," Cleaver said. "Our kids really had to learn a lot of things. We just weren't competitive."

But those underclassmen in 2013 stepped up, leading the Blue Devils to a 5-4 mark and near-playoff berth last season.

"The thing I was most proud about in 2014 was that we were competitive in every game," Cleaver said. "There were no blowouts, like in 2013. We were making progress."

The progress has continued. With the senior class leading the way, Gaylord football is returning to where it was when Cleaver first ran the program from 2000 to 2007. The Blue Devils went 55-24 during those eight years. 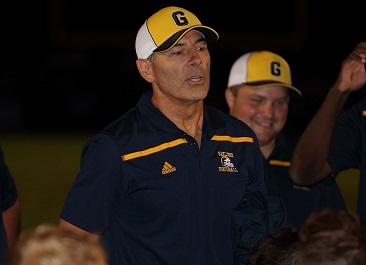 "It's exciting to be in the situation we're in now," Cleaver said. "We're pleased with how our kids are progressing and responding. We've got some pretty good players. That makes it easier."

One of those players is senior running back/safety Shane Foster, who rushed for 148 yards and four touchdowns in last week's 52-8 win over Ogemaw Heights. Foster was on the varsity as a sophomore in 2013 – a time when success was elusive. Gaylord slipped to 7-38 in the five years after Cleaver left following the 2007 season.

"It's all about mindset really and that (2013) team didn't have a good mindset,” Foster said.

"Last year we went 5-4," Foster said. "Obviously, we want to do better than that and make the playoffs. We realize we have to come together and work as a team to make that happen."

Gaylord’s athletic director Christian Wilson has watched his school’s progression – and it puts into perspective what St. Mary is going through. Those sophomores who had to play in 2013 have continued to work hard, especially in the weight room, he said, and now are reaping the benefits.

"Sometimes you have those years when you've got a lot of young kids playing," Wilson said. "But it's difficult to win games, especially in the Big North Conference, when your key players are sophomores or even juniors. You need to have senior leadership. We've been blessed with that this year."

Seniors dominate the line on both sides of the ball for the Blue Devils. Foster is the leading ground gainer. Another senior, Jacob Freeman, is a threat, too. He returned a kick 60 yards for a score, hauled in a 37-yard touchdown pass from Nick Rowley and completed a 34-yard pass to Rowley on a trick play in the win over Ogemaw.

Rowley, a sophomore, gives the Blue Devils balance. He completed 12 of 15 passes for 170 yards in a Week 3 win over Escanaba.

"Our kids have caught on as to what it takes to win ... what it takes to play at a high level," Cleaver said. "It all has to come together. We have great kids, and I have a staff that does a great job with those kids. It's been very rewarding."

Foster credits the staff for turning the team's fortunes around. It all starts with Cleaver, who left in 2007 to work as a defensive line/quality control coach under Butch Jones at Central Michigan University. He spent the next season coaching inside linebackers at Liberty High School in Frisco, Texas, before returning to Gaylord and helping out in the youth football program. 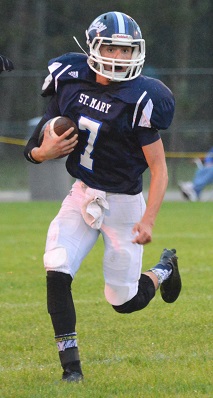 Cleaver, a financial adviser, said he didn't expect to return to the sidelines at the high school given the commitment it would take to rebuild the program. But his two sons, who were playing in the system, "begged" him to consider it. So a family meeting was called.

"I told them that if I'm going to do this, it's going to take a lot of work and you need to be on board," Cleaver said. "If everyone is not all in, it's not going to be worth it. Everybody voted and said 'Let's do it.'"

Gaylord started 4-0 last season, but a loss to Traverse City Central spiraled into a 1-4 finish.

"After that (loss to Central), it didn't go the way we planned," Foster said.

That's why Friday's showdown is critical for the Blue Devils.

At St. Mary, there is no league title to play for this season. The goal is long range – boost numbers in the program. With Manistee Catholic Central switching to 8-player this fall, St. Mary is now the smallest Catholic school playing 11-player football in the northern Lower Peninsula. In fact, the Snowbirds, who co-op with Alba, are the sixth smallest program in the state with 133 high school students – 91 at St. Mary, 42 at Alba.

With three Ski Valley Conference members – Bellaire, Pellston and Onaway – playing 8-player, there was talk in the community about making that switch, too. But that's all it was – talk. Since then the school's made a commitment to 11-player by joining the Northern Michigan Football League, with play starting next season.

"We feel there's a good future here," new athletic director Jeff Hunter said. "We obviously have to work at increasing our numbers. The economy really hurt us for several years. It hurt everybody. This is a choice for people to send their kids here. We've seen our numbers go from the mid-60s (three years ago) to back into the 90s. I would like to see us with 150 kids in this high school in the next five years. We're working really hard."

Five of the 25 players on the roster are from Alba. Hunter said he's looking at other "co-op opportunities" as well in order to strengthen the program, although he did not want to elaborate at this time.

Cleaver was the coach of the 1999 squad.

Hunter is certain St. Mary has the right coach in O'Connell to bring the Snowbirds back.

"Our current football staff is out of this world, entirely committed," he said. "We're not far from being competitive – three or four athletes. We're in most of these games. There's a lot to come, and Kevin is the guy to lead us."

St. Mary suffered two eight-point losses to start the season – 35-27 to Oscoda and 22-14 to Central Lake. O'Connell would like to have those games back.

"You can't turn the ball over five times one week and four the next and expect to win," he said.

The Snowbirds then ran into two of the area’s powerhouse teams, unbeaten and state-ranked St. Ignace and Johannesburg-Lewiston. 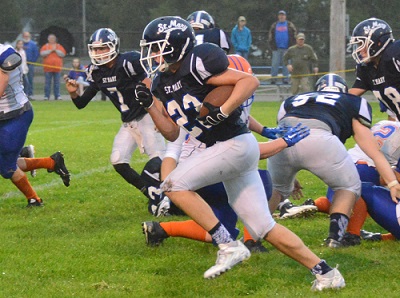 "We have a solid group of athletes in our sophomore class. They're physically big enough to play. And we have a nice eighth grade class coming up."

O'Connell is putting added emphasis in a strength and conditioning program for all high school athletes, regardless of sport.

"We're making great headway and our kids, boys and girls, are getting on board with it," he said. "We want to be able to jump higher, run faster and be more explosive. Last I knew, those (concepts) applied to every sport."

With such a young roster, O'Connell admits he and his staff are spending more time teaching fundamentals than in the past when the school had a JV team. They're also trying to develop the mental aspects of the game, such as working with players in analyzing situations in order to slow the speed of the action down so it's not overwhelming.

O'Connell feels for the younger players who are not ready for varsity, but are thrust into competing with older players. He said they miss out "on those formative years" at the JV level where they can grow, learn the fundamentals, gain confidence and get game repetitions while playing opponents the same age.

Hunter hopes this is just a blip.

"Our intent next year is to have a JV team," he said.

With several smaller schools, especially in the northern Lower Peninsula, turning to 8-player to keep programs alive, O'Connell is concerned about the future for those who elect to stay in the 11-player game. As more Division 8 schools make the switch, more Division 7 schools drop down to create equal numbers for the playoffs – widening the enrollment gaps within the division.

But St. Mary is moving forward, ready to tackle the challenge. Hunter, a pilot for Southwest Airlines, thinks the program is ready to take off.

"Kevin believes we can be successful," he said. "A quality football program is one of the cornerstones to a growing school. A lot of people don't like (to hear) that, but I think it's true. A great athletic program is a draw.

"I'm hoping next year you're writing a different article, and that article will say here's the way to success."