GRASS LAKE – Cameron Darrow remembers the play like it was yesterday.

“It was the third quarter and there was nine minutes left,” the Grass Lake middle linebacker said. “I had 14 tackles in the game already. I came up through the hole and it was raining, and I tackled the running back. As I was lifting him up, my foot got caught in the ground and twisted and popped.”

Darrow broke his ankle in two spots in that game against Addison, which was near the end of his sophomore season. It was a long road back, but the Warriors senior captain made a full recovery. He’s one of the reasons Grass Lake is off to a 2-0 start and has its sights set on a big season.

“We just take it game by game,” Darrow said. “We just want to keep winning. Our goal at the end of every week is to be 1-0.”

The reigning Cascades Conference champions earned a spot in The Associated Press’ Division 6 top 10 poll earlier this week. And going into tonight’s game against East Jackson, the Warriors are in midseason form. Grass Lake beat Stockbridge 58-12 in the season opener and handled Vandercook Lake 51-0 in the first game of league play.

“You can’t argue with how the kids have played,” said 20th-year Grass Lake head coach Randy Cole. “It’s very early in the season, though. We have a long way to go. We just have to keep getting better.”

Over the past six seasons, Cole has employed a high-powered, up-tempo offense. His son Anthony was an assistant coach at Albion College when Cole asked him his thoughts about implementing the offense at Grass Lake. It’s worked.

“It gives us a lot of versatility,” Cole said. “We spread the ball around. We get the ball out quick. It’s fun. The kids like it.”

Grass Lake is used to winning. The Warriors have made the playoffs 13 of the last 14 years and are 145-60, a winning percentage above .700, during Cole’s tenure. 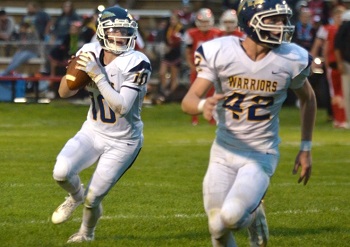 This year’s offense is led by junior quarterback Carson Farley. He’s been dynamite through two weeks, completing 26 of his 30 passes for 440 yards and nine touchdowns. He hasn’t thrown an interception.

“He’s new,” Cole said. “He was our JV quarterback last year. He’s off to a great start. He makes good decisions. He has good knowledge of the offense. We run the same thing on the JV, and he ran it well last year. He knew coming in that he was going to be our quarterback, so he worked hard this summer.”

Farley has spread the ball around. Over just two games, six Warriors have at least one rushing attempt and eight receivers have caught passes. Six of those eight pass-catchers have a touchdown.

“We don’t really have a No. 1 receiver,” Cole said. “We spread it around. We take what the defense gives us.”

Trenton Holden leads the Warriors in rushing with more than 300 yards on nearly 12 yards per carry.

“We don’t even use the word huddle,” Darrow said. “We call it a gathering. The only time we ‘gather’ is late in a game if we are trying to use up the clock.”

On defense, Darrow is the signal-caller from his middle linebacker spot. He’s been in on 24 tackles over two games – credited with 20 solo tackles and four assists. He has three tackles for loss and one sack.

“He’s the guts and glue of our defense,” said Cole.

Grass Lake’s No. 1 goal, as usual, is to win the Cascades Conference. After that, the Warriors are hoping to make a deeper run in the playoffs. Last season they started 8-0 before losing to eventual Division 8 champion Reading in the Week 9 Big 8 Conference crossover game 55-7 and then to Cascades foe Michigan Center 35-6 in the first round of the playoffs.

“We were humbled,” Darrow said. “We really wanted to be the third team in Grass Lake history to go 9-0 in the regular season, but we just fell short. We definitely have that in the back of our minds. We want revenge and want to make it further in the playoffs.”

During the winter and summer workouts, Darrow said, those two losses were motivation for the Warriors players.

“We had 30 to 40 kids there lifting all summer,” he said. “We talked about those losses. We want to be better this year.”

Darrow, who is one of three team captains along with Gage Lee and Shane Holcomb, said this year’s Warriors are a tight group.

“We play for each other,” he said. “We all have the same goals. We’ve been playing together since the third grade and we just love football. When I was coming back from my injury last year, everyone lifted me up and helped me get back. Not coming back wasn’t an option. I love football too much.

“Football is a brotherhood. We play for each other.”