DETROIT – For a team not used to giving up points – or yards, for that matter – it would have been easy Friday for Hudson to make some big changes at halftime to slow down a Beal City offense that had found success through the passing game.

But the Tigers – who entered the MHSAA Division 8 Final having allowed 107.7 yards and less than a touchdown per game through the Semifinals – didn’t stray from the gameplan.

“Honestly, (the adjustment was) just keep playing,” Hudson coach Dan Rogers said. “They did a great job, their line, we couldn’t get pressure on the quarterback. He could get out on the edge and we struggled getting to him. That made us cover a lot longer than we want to, so we were trying to get to the quarterback a little bit more, keep the receivers in front of us and make plays on the football.”

It worked, as Hudson smothered Beal City in the second half, allowing just 17 yards over the final 24 minutes of its 14-7 victory at Ford Field to claim its second Finals title.

“I can’t even describe it yet; it hasn’t really hit me yet,” said Hudson senior running back and safety Bronson Marry, who had a crucial late-game interception. “I’m just waiting to walk out of the locker room and find our families. It’s going to (hit like) a brick wall.”

While Hudson (14-0) never led by more than one score, Beal City never threatened to overcome it, spending the entirety of the second half offensively on its own side of the field. The Aggies’ five second-half possessions went for 4, -6, 13, 1 and 5 yards, and totaled 5 minutes and 29 seconds.

A fumble, an interception and downs ended the last three drives, with Nick Kopin breaking up the final Beal City pass attempt with 1:51 to play, sealing the game. It was a fitting end to Kopin’s big day, as he also had forced a fumble earlier in the fourth quarter and rushed for 131 yards and both of Hudson’s touchdowns.

“It’s amazing,” Kopin said. “Obviously, I’m going to credit all my runs to our offensive line and our play-calling by coach (Jeremy) Beal. It set up really good cutbacks, and they were blocking real well. Defensively, credit to (Coach Rogers), he’s very strict on us reading our keys and doing our jobs. I think all of us, including myself, just did that, and the game turned out in our favor.” 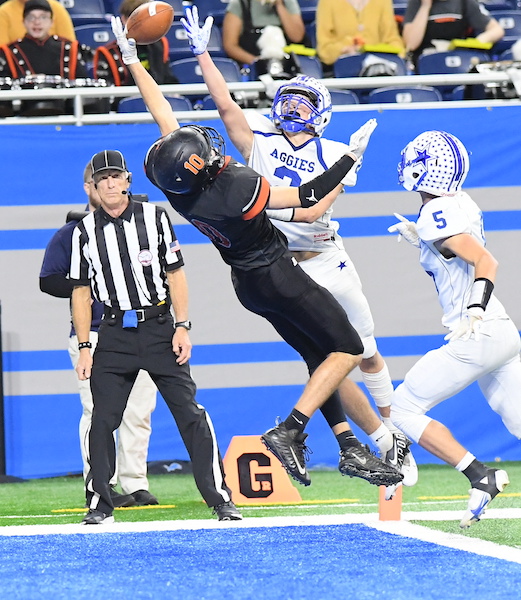 Kopin’s second score, a 2-yard run, came with 6:58 to play and put the Tigers up 14-7. The two-point pass was no good, however, keeping Beal City within a touchdown. The Aggies received a further boost with the return of quarterback Hunter Miles, who had been injured midway through the third quarter, but Hudson’s defense didn’t allow for a storybook comeback.

“Hunter Miles is Hunter Miles; he’s a warrior,” Beal City coach Brad Gross said. “That’s Hunter Miles. Ankle, ribs, everything else (was hurt). We have a lot of guys dinged up. Cade Block’s had a (injured) shoulder that he’s been playing with for three weeks. Wade Wilson has a broken hand that he played the whole game with. We’re just banged up. We have a bunch of warriors. That’s why we’re here.”

Miles had more success in the first half, mostly on the strength of a pair of big pass plays to Carter Fussman. The first was a 53-yard touchdown pass late in the first quarter. Miles rolled to his right before finding Fussman open near the 10-yard line.

The second was a 56-yard throw and catch on the penultimate play of the first half, which came immediately after Hudson had taken an 8-7 lead on a 2-yard run from Kopin and a two-point conversion pass from Anthony Arredondo to Ambrose Horwath. The big pass play ended with Fussman being hauled down by Horwath at the Hudson 7-yard line with four seconds left in the half.

That tackle wound up being enormous, as an incomplete pass on the next play ended the half with Hudson still in the lead.

“It probably made the conversation at halftime better,” Rogers said. “It was a huge tackle. That’s what we talk about: You just have to keep playing. They’re going to make plays, things are going to happen, and it would have been just as easy to hang your head and he runs into the end zone. Our kids don’t do that, and Ambrose, he made a play, and that’s what we had to have.”

Hudson’s offense had success on the ground, rushing for 282 yards, but strong red zone defense from the Aggies kept them in the game. All five of Hudson’s second half drives – excluding the final one, which consisted of three kneel downs – ended at least within the Beal City 35, but just one led to a score.

“You have to give credit to Beal City, too,” Rogers said. “When we got down there, they stiffened up defensively and took all the inside runs away. Unfortunately, we weren’t able to score and it kept the game close.”

Payton Rogers added 62 yards on the ground for Hudson, while Horwath hauled in the lone completed pass for the Tigers, a 17-yard catch from Easten Strodtman that converted a 3rd-and-long on the Tigers’ fourth-quarter touchdown drive. Kopin led the Hudson defense with six tackles, while Strodtman and Ethan Harris each recorded a sack.