DETROIT – Rematches are rare in high school football, especially for teams located on opposite sides of the state.

But Detroit Martin Luther King on Saturday got the chance to avenge a Week 2 loss at Muskegon, and star senior quarterback Dequan Finn and his talented supporting cast made the most of it.

Finn, a 6-foot-1,190-pound senior who has committed to sign with Central Michigan University, threw four touchdown passes and ran for another as the Crusaders’ offensive versatility was the difference in a 41-25 victory over previously unbeaten Muskegon in the Division 3 Final at Ford Field.

“So many great King teams have lost to Muskegon, and it felt great to be the first to beat them,” said Tyrone Spencer, who has two MHSAA titles and a Semifinal appearance in his three years as King’s head coach. “They are a great program with a rich tradition, and it feels good to beat them for a state championship.”

King (12-2) won its third Finals championship in four years, after claiming back-to-back Division 2 crowns in 2015 and 2016. The Crusaders have won four titles overall, with their first also in Division 2 in 2007.

Muskegon (13-1) was shooting for its seventh MHSAA title, but instead finished runner-up for the fifth time, and saw its state-best 27-game winning streak snapped.

The final championship game of the weekend was a matchup between arguably the two best quarterbacks in the state – and neither disappointed.

Muskegon junior Cameron Martinez (5-11, 190) was once again the workhorse for the Big Reds, carrying 37 times for 211 yards and two touchdowns. He completed only 1-of-4 passes, but that completion was good for a 13-yard touchdown to senior Ali’vonta Wallace.

Finn, meanwhile, was deadly with his arm and feet.

Finn completed 9-of-13 passes for 173 yards and the four scores, as his offensive line gave him plenty of time to pick apart the Muskegon secondary. He was also King’s second-leading rusher with 11 carries for 73 yards and another touchdown.

The quarterback matchup went back-and-forth for three quarters, and when Martinez plunged in from two yards out late in the third quarter to draw his team within 21-17, it appeared the stage was set for a fantastic finish.

“There were a lot of plays that could have been big for us, but there were dropped passes and a missed interception,” said Martinez, who finished his junior year with a school-record 2,527 rushing yards. “In a game like this, you can’t afford to make mistakes.”

Muskegon, which was playing in an MHSAA Finals game for the sixth time in seven years, got off to a great start.

The Big Reds forced a punt on King’s first possession, and despite taking over at their own 3-yard line, marched 97 yards in 13 plays behind their dominating offensive line. Martinez sprinted in from 10 yards out for a 7-0 lead. 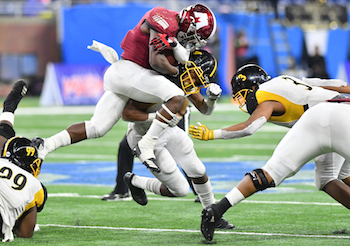 King countered with the passing of Finn, who connected with senior wideout Dominick Polidore-Hannah on a pair of first-half touchdown passes covering 42 and 22 yards as the Crusaders took a 14-10 halftime lead.

The third quarter was even as Finn and Martinez each had scoring runs, but King’s athleticism prevailed over Muskegon’s size and strength during the final quarter.

“We won 27 games in a row, and you have no idea how remarkable that is,” Muskegon ninth-year head coach Shane Fairfield told his huddled team on the Ford Field turf afterwards. “It hurts and it should hurt, but we haven’t felt this in a while.”

The victory was sweet revenge for the Crusaders and especially Finn. In the Week 2 meeting, he  mishandled a snap with 35 seconds remaining. Muskegon’s Billie Roberts recovered the fumble, and the Big Reds held on for a 24-21 win at Hackley Stadium in Muskegon. They went on to be ranked No. 1 in Division 3 the entire regular season and heading into the playoffs

“Our kids didn’t have any quit in them,” Spencer said. “I told them to give more effort, and that’s what they did. We got some breaks tonight, but (Muskegon) had some breaks when we went to their place and played. It’s a part of the game, and I’ll take it all day. Our guys never quit, and I’m proud of them.”

Senior Demario Robinson was the second-leading rusher for the Big Reds with 47 yards on six carries, while senior Carlos Hernandez booted a 37-yard field goal on the final play of the first half. Wallace led the defense with seven tackles, junior linebacker Tarran Walker had six and senior defensive back Isaiah Moore made five stops.

Muskegon, the winningest team in state history with 844 victories over 124 years of football (dating back to 1895), beat Farmington Hills Harrison last year for the Division 3 title. The Big Reds also have lost twice to Birmingham Brother Rice (2012 and 2013), twice to Orchard Lake St. Mary’s (2014 and 2016) and now King in championship games.

Fairfield scheduled the regular-season game against King to help prepare his team for the type of athletes it might see at Ford Field. He did not expect to see King again, as the Crusaders have traditionally slotted into the Division 2 bracket. But a drop in enrollment put both teams in the same division – and on a collision course.

Both had to survive Pre-District playoff scares, as Muskegon edged East Grand Rapids by one score (42-35), while King beat River Rouge by just one point (7-6).

After that, both teams rolled over their next three opponents en route to Ford Field.

Saturday’s matchup was the second time the two schools have met in an MHSAA Finals game, with the first meeting in the Class A Final in 1989 at the Pontiac Silverdome. Muskegon, which is now 5-1 all-time against King, prevailed in that title game 16-13.