When the championship game was switched from outdoors in Midland to indoors at the Legacy Center in Brighton, he liked them a whole lot more.

“We’ve got power, but speed is what we base ourselves on,” he said. “And the whole thought of basketball-on-grass when we’re on offense helps.”

The Cougars (11-0) took advantage, overwhelming Suttons Bay from the start in a 47-0 win in Saturday’s Division 1 Final.

Lenawee Christian put that speed to good use early, getting its first touchdown after a blocked punt by Jameson Chesser, and picking up its second with a 36-yard punt return for a touchdown by Ashur Bryja.

The Cougars never looked back, putting the game out of reach on the arm and legs of quarterback Landon Gallant, who threw two touchdown passes to Chesser, of 57 and 22 yards, and ran one in himself to give Lenawee Christian a 33-0 halftime lead.

Suttons Bay had just 52 yards in total offense, and completed only 2 of 14 passes while getting sacked seven times. 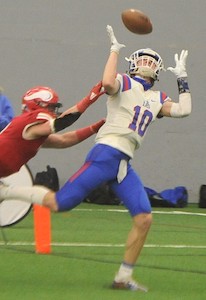 “They closed on the ball very well,” Norsemen coach Garrett Opie said. “They’re fast, they’re athletic and they did a great job. We were trying certain mixtures in plays and feeling things out at the beginning of the game, and they did so well against many of our looks.”

In fact, Suttons Bay’s biggest play came late in the game via its defense, when Michael Wittman picked up a fumble and returned it 37 yards before Bryja knocked him out of bounds, preventing a touchdown.

It was the first title for Lenawee Christian, which completed its first season of the 8-player format.

“it feels great,” said linebacker Brandon Scott, who led the Cougars with 10 tackles. “To do it with this team makes it a lot better. All the things we went through, all the pauses, who’d have thought we’d be finishing high school football in January? And indoors?”

“It’s tremendous for the Adrian community,” Wilharms said. “In Lenawee County, we’re pulling for Clinton next week to win it in (11-player) Division 6. We’re a brotherhood. It means a lot to us.”

Opie, an Adrian High School graduate who went to school with Wilharms' wife and sister-in-law, saw his team lose in the Division 1 Final for the second year in a row, but took the loss philosophically.

“They’re a phenomenal team,” he said of Lenawee Christian. “They had a lot of talent on their team and did a fantastic job. I’m very proud of our team for our 10-0 season. This is a very tough loss. We don’t want to go out this way, but it’s a privilege to be here, so we’ll take it with us and be very happy about it."