Along the way, they also handed off the program’s future.

Seniors LaTommy Scott, Logan Helton and Walker Christofferson had become Ford Field fixtures the last few seasons, and each contributed to their combined four touchdowns in this Division 8 Final. But the fifth score of MCC’s 35-6 victory over Ottawa Lake Whiteford was scored by a freshman who will take over from here – and showed the promise that makes the Crusaders look good to continue these annual trips to Detroit.

Splitting time at quarterback with senior Trenton Bordeaux, freshman Cameron Martinez ran for a team-high 154 yards and a touchdown and threw for 61 yards and a score to help MCC pull into a tie for second all-time with its 12th MHSAA football title.

Although a freshman, the scene wasn’t entirely unfamiliar for Martinez; his brother Christian had quarterbacked the team to its 11th title last year as a senior.

“Every time we made it, I was watching from the crowd. I couldn’t wait to put on the gold helmet and bring this team back again,” Cameron Martinez said. “I love this group of seniors. I’m going to miss them, and that’s what I wanted to do – give them their fourth straight title.”

With four straight, the Crusaders (14-0) are now one shy of the MHSAA record of five consecutive titles shared by the Farmington Hills Harrison teams from 1997-2001 and East Grand Rapids’ teams from 2006-10. With 12 championships total, MCC is tied with now-closed Detroit St. Martin dePorres for second most in the sport, one behind Harrison’s record 13 football titles.

Martinez entered the Final third on the team with 614 rushing yards, tallying 12 touchdowns on the ground, and second to Bordeaux with 540 passing yards plus nine scoring passes. Also a starting linebacker, he didn’t play offense in MCC’s 35-0 Semifinal win over St. Ignace last week. But he was impacting the Crusaders’ offense by the end of Friday’s first quarter.

Martinez’ first carry came on the final play of that quarter, for three yards, and he opened the second with a 26-yard run. He also had a 19-yard run and 23-yard pass to set up Helton’s five-yard scoring run that put the first points on the board with 9:05 to go in the first half.

After coming up shy on another drive late in the half and then pushing the score to 14-6 on a 35-yard Helton run to cap its first possession of the second, MCC made it 21-6 with 3:08 to play in the third quarter with a drive that included 55 rush yards on five Martinez carries, including the final one for three yards into the end zone.

“Anytime you have a running quarterback, you have to defend 11 and not 10; it’s just simple math sometimes,” MCC coach Steve Czerwon said. “Having somebody in the backfield as dynamic as Cameron, with the ability to make plays … people are like, ‘He’s a freshman.’ Well, he’s a freshman, fine. But he doesn’t play like a freshman.” 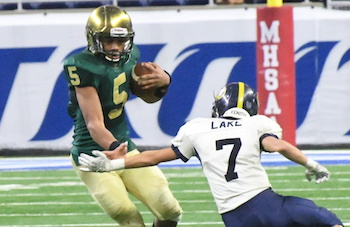 MCC welcomed its captains from the last three seasons to Thursday’s practice, and after, Czerwon asked Christian Martinez if he was nervous for his brother. Christian’s response to Czerwon: “Nah, he’s made for these big moments.”

“After he said that – and he knows him a heck of a lot better than I do – I felt good about using him today,” Czerwon added. “And I thought he performed very well.”

So did those seniors. Helton ran seven times for 67 yards and those two scores, and Scott ran eight times for 69 yards and scored on the 25-yard touchdown “pass” which was more of a front pitch on a sweep around the left side. Christofferson, who ran for 200 yards and three touchdowns in the Semifinal win, added the day’s final score with 1:04 to play.

Helton, also a linebacker, had 10 tackles and Christofferson, a defensive back, had seven to follow up all-state senior linebacker Andrew Schulte's team-leading 13. The Crusaders never trailed this season, and the defense was a big reason why; including 13 points surrendered over five playoff games, MCC allowed only 77 points this fall (5.5 per game).

But Friday’s score didn’t tell well how close this matchup was for most of it. Whiteford had six turnovers on downs, falling short of first downs by only a yard four times. Twice, MCC sophomore defensive back Dawson Steigman made rally-ending stops. Three of the fourth-down misses came in Crusaders territory.

Whiteford junior quarterback Thomas Eitniear was especially impressive, completing 7 of 10 passes for 96 yards and running nine times for 111 yards including the team’s lone score, an 81-yard sprint around the left end that made it 7-6 with 2:37 to go in the first half.

“Coming into halftime, that was the exact kind of game we were looking to play – to chew clock, and we just didn’t articulate a couple of our possessions into scores,” Whiteford coach Jason Mensing said. “Second half, they found some things offensively against us and took advantage. And on top of that, we didn’t articulate our drives as well.

“Overall, I’m pleased with the effort and passion, and probably the thing I’m most proud of was I didn’t feel like the moment was too big for our kids, which oftentimes you get into this type of stage, the moment can be a little large. I thought our kids handled themselves with great composure, and that’s one of those attributes for life that really matters.”

Whiteford made its first appearance in an MHSAA Final, following up its second straight – and second ever – Semifinal appearance. The Bobcats finished 13-1.

“Me and a bunch of the senior guys, we dreamed about this since freshman year,” said senior running back Jesse Kiefer, who finished as the school’s career record holder in rushing yards, points and total offense. “Coming in and being able to play on this field, it’s just not real to me. Obviously, we wanted it to come out a different way than this, but it’s still an experience I’ll never forget.”

With it being their last, MCC’s seniors asked to not come out of this game early as they have most of this season with the Crusaders beating all of their opponents by at least two touchdowns.

But as they left Ford Field once more, surrounded by 13 underclassmen, they were confident with who might lead MCC back next time.

“Handing it off the Cameron, our program is in good hands,” Helton said. “I don’t expect anything less than what we’ve been doing.”