MOUNT PLEASANT – Josh Wheaton stood admiring the Community Memorial Stadium grass a little less than a year ago, and he knew what was coming next.

The weeks of trampling to come would produce the same result as every year beginning in mid-September.

“I’m looking at it and thinking, I can’t believe a week ago it was exactly the way you’d want your yard to look,” said Wheaton, a varsity assistant coach for Mount Pleasant’s football team. “And now, it’s this. It’s the same every year. I knew it was coming – and by weeks 7, 8, 9, we were going to be playing in a mud pit.”

But less than a year later, as the team prepared for its first game last week, Wheaton and his Oilers – and co-tenant Mount Pleasant Sacred Heart as well – all were enjoying something that defied any expectation: a project pulled off so quickly, it spoke well to the name of the stadium the schools share.

In less than a year, supporters of Mount Pleasant High and Sacred Heart Academy raised $600,000, secured another $300,000 in donated work, and assisted in the transformation of the stadium from an aging landmark built 50 years ago to what should again be one of mid-Michigan’s athletic jewels for years to come.

The schools reopened the stadium Friday for a doubleheader. Sacred Heart fell to rival Beal City in the opener, and Mount Pleasant then defeated Midland Dow to finish a night that saw more than 5,000 fans pass through the new gates and witness the official debut of stunning two-tone green turf that served as the main focus of a renovation that has only just begun.

“It is a community that believes in young people and certainly believes in athletics,” Mount Pleasant athletic director Jim Conway said. “I think being in a college town (with Central Michigan University), there’s that collegiate portion to it where the kids start (here), and many end up matriculating over there. And we sit right here in the middle of the city, and being the shared facility, that is kind of the focal point. We were able to use that and people latched on and wanted to be a part of it, and we’re still going.”

If you rebuild it …

Community Memorial Stadium opened in 1965 as the shared home of the Mount Pleasant High and Sacred Heart football and track and field programs. Prior to its construction, the programs had a variety of homes – CMU’s Alumni Field for the Oilers and at times the Irish, who also played at Fancher Field and at Island Park going back to at least the mid 1930s.

The new stadium construction was funded solely by the community and opened Sept. 25, 1965, for what ended as a 26-26 tie between Mount Pleasant and East Lansing. The field has remained a point of local pride since, with junior high games and the town’s rocket football teams also taking regular turns on the grass. 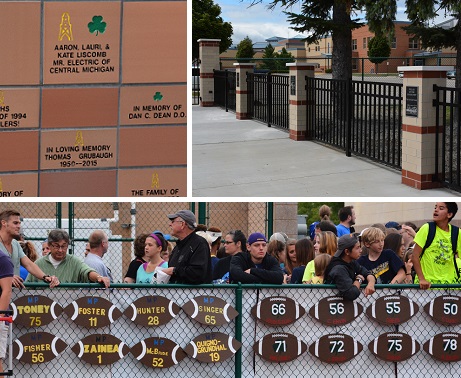 Most weeks during the fall see the stadium host three or four games. But Wheaton said last fall there were three weeks during which 11 games were played.

It’s not that all the activity tore up the field. But it didn’t allow the grass time to regrow after the older kids did their damage on Fridays and Saturdays.

All of that caused Wheaton to casually suggest last fall to Oilers coach Jason McIntyre that the grass should be replaced with synthetic turf. Never will happen, McIntyre responded. That conversation had been had before – including briefly when a bond was passed eight years ago that led to the repair of the locker rooms, concession stand, press box and track at the stadium – and talks about going to turf had never progressed past the idea stage.

Wheaton told his boss he’d take care of it, but nothing more was said on the topic for a couple weeks … until someone else brought it up, and McIntyre joked that Wheaton was all over it.

This time, he ran with it.


In October, Wheaton formed a committee made up of supporters of both schools. They decided they would need to raise all of the money for turf over six months – by April 1 – and split into sub committees to handle fundraising and construction.

“When I first heard about it, I was a little skeptical,” said Sacred Heart athletic director and football coach Rick Roberts, who like McIntyre is a second-generation football coach in the 26,000-resident town and has led his program for 23 years.

“I wasn’t sure we could raise that much money in that short of a time; the economy isn’t the greatest at the moment. But when I went to a meeting, and saw the energy that was around the table, I knew it was going to happen.”

Pillars of the Community

But kids at the schools grow up playing Little League baseball or youth basketball together, and a number of Mount Pleasant High families attend Sacred Heart Parish. 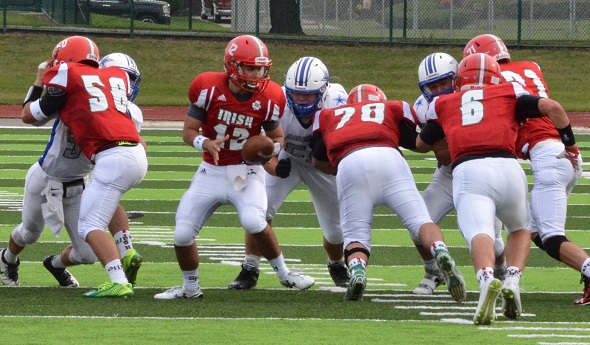 And there was plenty of work for all to do, and do quickly.

With money rolling in, the old grass field would need to be dug out to eight inches below the surface. Materials would need to be brought in to refill the base where the synthetic surface would be laid.

Pennsylvania-based ProGrass did the turf work, but the rest was done with local hands and equipment.

Wheaton made contact with the Isabella County-based Morey Foundation, which pledged to match $200,000 in donations from the community. Committee member Doug Moore is a president with Fisher Companies, which does concrete and asphalt work as well as construction transportation in mid-Michigan, and his company contributed much of the $300,000 in in-kind work.

McGuirk Sand-Gravel, which had also contributed when the stadium originally was built, hauled out the old field, while Malley Construction built the concrete curbs and long jump pits. Contractor Eric Borodychuk constructed the new entrance. Straus Masonry continues to build the wall of bricks and pillars purchased by donors, and other volunteers landscaped the hill near the front gate.

“If you don’t have those kind of people in your community, this doesn’t even get off the ground,” Wheaton said.

“We thought that was there,” Conway said of the support. “This is proof.”

Still work to do

Those are more or less a memory now – the varsities for both schools practice daily at the stadium, sometimes splitting the field down the middle. The subvarsity teams still practice on other fields, but the track and field throwing areas are inside the stadium as part of the new construction. 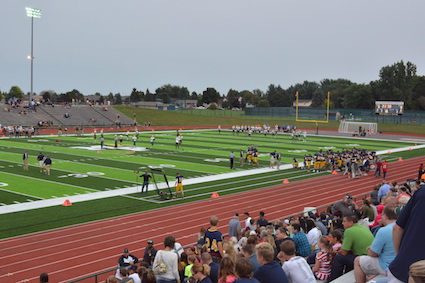 “It’s an honor, for sure. It gives us a lot of motivation,” Heeke said. “All the people who donated money to have this happen, we have to show them that we’re good enough and we want to play here, and we’ve got to play for them. It’s awesome to think of all the people who come to our Friday night games, and maybe they’re not showing up in the stands, but they’re on the wall and they’re thinking about us.”

Two members of the original 1965 stadium committee attended a celebration of the new field Thursday. Roberts, who remembers the stadium’s initial construction, believes the original contributors who have since died would be “thrilled” with how the current community has taken up their work and improved upon it.

Bricks and pillars continue to be sold, for as little as $250 and as much as $25,000, as part of the Pillars for the Community fundraising group the renovation committee set up. That money will fund a phase two that likely will include replacing original concrete and possibly adding new bleachers. Both schools are contributing together annually to a fund that will allow for the necessary regular maintenance and then replacement of the turf in 10-12 years.

“(The committee) all wanted the same thing. And when you get a bunch of ex-athletes in a room who all want the same thing for kids in the community, it goes pretty well,” Conway said.

“It’s just been a Mount Pleasant family, if you will."

PHOTOS: (Top) The Community Memorial Stadium turf includes the logos of both its home teams, the shamrock for Sacred Heart and the oil derrick for Mount Pleasant High. (Middle top) Supporters have given to the stadium and the schools' players in multiple ways, from buys bricks and pillars to hanging signs. (Middle below) Sacred Heart runs a play against Beal City during Friday's game. (Bottom) Mount Pleasant High and Midland Dow players warm up before their game Friday night. 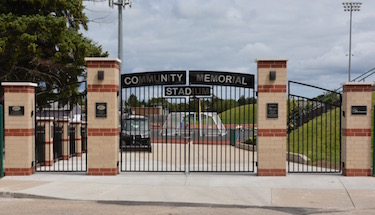 A new gate at the north entrance welcomes fans to Mount Pleasant's Community Memorial Stadium. The gate is anchored by pillars highlighting some of the project's largest donors. 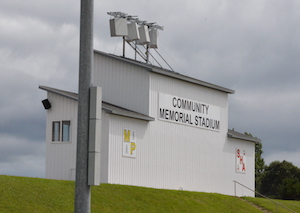 The parking lot-side of the stadium pressbox, like field below, includes banners of both teams that share the field. 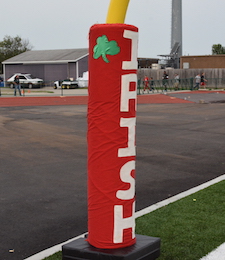 The uprights are padded specific to the team on the field; red for Sacred Heart's Irish and dark blue for Mount Pleasant High's Oilers. 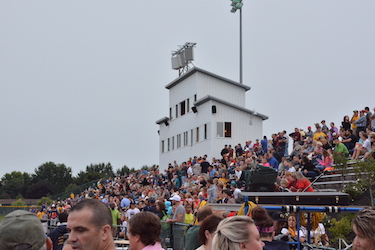 More than 5,000 fans filled the stadium for Friday's doubleheader, these mostly supporters of Mount Pleasant High after the Sacred Heart game against Beal City had ended.