Every football team talks about being a family.

But at Muskegon Oakridge, it’s more than just a motto.

Three of the Oakridge varsity coaches have sons on the team, including head coach Cary Harger with two-way starting senior lineman Cole Harger.

“It does make it extra special, being a senior and playing for my dad,” said Cole Harger of the Eagles’ high-flying start, which has them 6-0 and ranked No. 3 in Division 5 in the latest Associated Press poll.

“The family thing is real out here. This is such a tight-knit community, and we’re just together all the time. We know each other so well and know how to push each other.”

Oakridge faces its toughest test of the season Friday when it hosts conference rival Montague (5-1), which comes in riding a five-game winning streak and ranked No. 10 in Division 5.

Oakridge has been the dominant team for almost 40 years in the West Michigan Conference, a league which has put 14 teams in MHSAA state championship games and celebrated nine Finals winners. Oakridge has made it five times, winning titles in 1997, 2005 and 2008.

Early on in that stretch, the Eagles’ main league rival was North Muskegon, and later Ravenna. In the 2000s, the most competitive rivalries shifted north to the White Lake area in Whitehall and Montague, particularly Montague.

Oakridge is 7-4 against Montague over the past 11 years, with many of those games classic back-and-forth battles that came down to the final minutes (and sometimes, seconds). But the only game that anyone at Oakridge seems to remember is from a year ago, when host Montague pounded Oakridge 40-0 – the most lopsided conference loss in school history.

“We have waited 51 weeks for the opportunity to erase that memory,” said senior linebacker Jaden Parker, whose father, Tim, is the Oakridge defensive coordinator. “We got shell-shocked last year and didn’t fight back. This year we have more seniors, and we won’t let that happen again.” 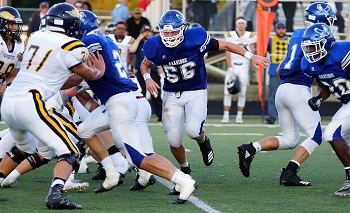 This year’s matchup features two of Michigan’s top running backs. Montague senior Bryce Stark, a returning Associated Press all-stater, has gained 542 yards on 74 carries (7.3 per carry), despite being slowed early in the year with a knee injury. Oakridge counters with battering ram junior fullback Leroy Quinn (6-1, 216), the leading rusher in the Greater Muskegon area with 111 carries for 1,119 yards (10.1 average) and 19 touchdowns.

Coach Harger is quick to point out that Stark is just one of many weapons on this Montague team who worries his team.

“The first thing that strikes you about Montague is their athleticism and the number of quality athletes we have to focus on,” said Harger, a 1990 Oakridge graduate. “But they are also big up front, so you have to be concerned with that, as well. We need to play our best game.”

The final father-son connection on the Oakridge varsity staff is offensive coordinator Nate Danicek and his son, Jacob, a sophomore who starts at safety and plays slot receiver on offense when the Eagles break out of their full-house backfield and go with a spread look.

But the Oakridge football family goes far beyond just the coaching staff – it’s a way of life.

After a long practice Tuesday evening, Coach Harger and Coach Parker (whose fathers coached them on an Oakridge youth football team almost 40 years ago) went down the varsity roster and quickly pointed out all of the players whose fathers also played varsity football at Oakridge.

Sander Brott is also a third-generation Eagle, as his grandfather, Mark Fazakerley, played on the first Oakridge varsity team in 1966.

“We are doing our best to carry on the tradition that Jack Schugars started out here,” said Coach Parker, referencing Schugars, who had a 262-78 record in 31 seasons at Oakridge from 1979 to 2010. “It’s a point of pride that these are all Oakridge kids. We don’t have schools of choice, so almost every one of these kids has been playing together since the youth leagues.”

The Oakridge youth league still boasts more than 150 players and is the starting point for one of the state’s most consistent programs. 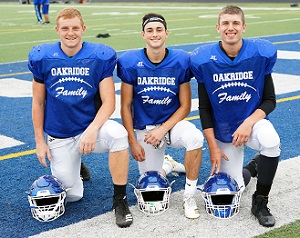 With its six consecutive wins to open the season, Oakridge has qualified for the playoffs for the 15th straight year and 23rd of the past 24. Many believe this team could be good enough to get all the way to Ford Field for the first time since 2008.

The Eagles have an experienced backfield led by Quinn, but also featuring speedy senior Masterman (359 yards) and multi-talented senior Jalen Hughes (315 yards). Wall provides a fourth running threat and has been efficient through the air, completing 28-of-43 passes for 516 yards and 10 touchdowns, with just one interception.

The defense is led by senior tackle Brandon Wilde (5-9, 212), who has 38 tackles on the season with half of those tackles in the backfield for negative yardage, including six sacks. Masterman leads the team with 40 tackles, and senior cornerback Jaxon Fri has three interceptions.

Oakridge could possibly play Montague a second time in the playoffs. Montague has traditionally been a Division 6 playoff team, but with its enrollment up 36 students from last year to 445, it could end up with Oakridge in Division 5.

Another possible Eagles rematch down the road is with top-ranked Saginaw Swan Valley, which beat Oakridge in last year’s MHSAA Regional Final, 48-14.

The “Oakridge family” isn’t looking near that far ahead, but is focused on proving itself after last year’s lopsided loss at Montague.

“The way we played in that game last year was our biggest motivation all offseason,” said Cole Harger. “That wasn’t Oakridge football. I think one of our biggest strengths this year is our togetherness as a team, and we have the opportunity to prove that on Friday night.”

PHOTOS: (Top) Senior Cole Harger and Oakridge coach Cary Harger are one of three sets of fathers and sons on the varsity this season. (Middle) Harger (66), a two-way starting lineman, lines up his block during a Week 2 win over North Muskegon. (Below) Harger, with Jacob Danicek (middle) and Jaden Parker, whose fathers also are on the coaching staff. (Photos by Sherry Wahr.)