MARQUETTE – A year ago, the Pickford football team was left heartbroken at the Superior Dome as it fell in the 8-player Division 1 championship game.

On Saturday, the Panthers exited the stadium in jubilation as they finished the job this time, downing Portland St. Patrick 48-15 in the Division 2 Final.

Pickford used its large offensive line and talented rushing game to take over in the second quarter. From then on, the Panthers never looked back as they outgained the Shamrocks 285-18 on the ground and 437-143 in total yards on the way to their first title in the sport.

“Our staple for the whole year has been our offensive line, and we knew if we stuck with it and do what we did best, we’d force them to do what they didn’t want to do,” Pickford head coach Josh Rader said. “We controlled the line of scrimmage, I think, on both sides of the ball. And when you’re able to do that, you’re going to win the majority of the games.

“We came up short last year and after that game, you get that empty feeling in your stomach. A lot of them were juniors, and we only had two seniors on the team last year. So they had a goal to get back here to be able to play in this game and win it. So we had some unfinished business, and we found a way to come back here and finish it.”

Pickford quarterback Jimmy Storey agreed with his coach, saying that a championship was on the team’s mind from the start of the season, but took a lot of work.

“It’s all those extra reps,” he said. “Coming out the first day of practice, we set our goals and said we want a state championship this year. We’ve been working toward that in every practice, every game and every play. We just came out wanting it.”

While Pickford (12-1) looked sharp from start to finish on Dome’s turf, the stadium continues to be an unlucky place for the Shamrocks as two years ago they were run over by Crystal Falls Forest Park. This time against the Panthers, the Shamrocks were hit hard early and struggled to get anything going offensively after the first quarter. 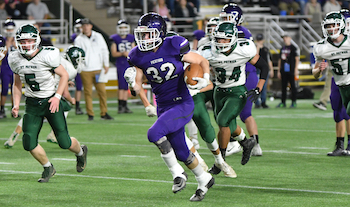 “We had some trouble just slowing them down,” St. Patrick head coach Patrick Russman said. “They are great up front, and we knew that. We needed a couple big plays here or there to keep us going along with it. We had a couple chances in there in the passing game. Some we made, and some we didn’t. We just needed a few more points on the board to make it interesting. I credit the kids, and I credit their kids. Credit our kids for fighting all the way through. Two really good football teams on the field today.

“Statistically, if you looked at it, we probably shouldn’t be here. Our kids are such great football players that it’s fun to watch them play week-in and week-out. Just the time and heart they put into it and how they treat other people, those are the great things we get out of this group.”

The first quarter started off pretty even. After forcing a St. Patrick punt, Pickford scored on its opening possession. A couple of first-down runs by Storey got the ball up to the Shamrocks’ 31-yard line before Matt Bush busted up the middle for a touchdown. Storey ran in the 2-point conversion, and the Panthers led 8-0.

St. Patrick (12-1) answered. A long kickoff return from John Schneider brought the ball to the Pickford 7, and a couple of plays later Ned Smith plunged into the end zone on a one-yard run. The Shamrocks got the conversion on a pass from Connor Cross to Tyler Coyne, and the game was tied at 8-8 going into the second quarter.

From that point on, it was almost all Panthers. On the ensuing possession, Pickford quickly marched downfield. On 4th down on the St. Patrick 25, Nick Edington made a nice overhead catch in the end zone. Stephen Lamothe got the conversion for the Panthers to give them a 16-8 lead.

After almost picking off a Shamrocks pass, the Panthers scored again on their next offensive chance, first using their running game to get into St. Patrick territory. Storey capped off the drive with his first rushing touchdown, a two-yard run, and he then hooked up with Micah Bailey for the conversion. Pickford now held a 24-8 advantage with 5:09 left in the second quarter.

The Panthers added one more touchdown before the half, another two-yard run from Storey, and picked up the conversion. St. Patrick had a chance to go into the break with a little momentum as a 39-yard pass from Cross to Schneider took the team to the Pickford 21. But the Shamrocks couldn’t capitalize.

Things got worse for St. Patrick during the second half. Pickford used a combination of running and passing to get the ball to the Shamrocks’ 3, and Storey got his third touchdown run of the game. The Panthers got the conversion on a pass to Luke Batho and led 40-8 with 8:44 left in the third quarter. Pickford locked down the win with 5:20 left when Storey found Batho down the Shamrocks’ sideline for a 55-yard touchdown. The conversion put Pickford up 48-8.

St. Patrick did get on the board one more time as Cross hit Coyne over the middle with a 76-yard touchdown pass with seven seconds remaining.