And he and his teammates made them count during Friday morning’s Division 8 Final at Ford Field.

Two days shy of a year ago, the Reading now-senior quarterback tweeted that his team would be making the trip to Detroit this weekend. It was quite a prediction. The Rangers had just finished 8-3 – but hadn’t reached a Semifinal since 2008 and had never played in an MHSAA football championship game.

Well, Reading is believing. Breckenridge scored first Friday, but the Rangers popped back up and broke away for a 39-20 win and their first Finals championship in this sport.

The win actually capped a three-year run that saw three freshmen and seven sophomores join the varsity in 2016, boosting that team from 11 to 21 players even as the overall level of experience fell dramatically. Reading finished only 3-6 that season, but set the stage for the team to play on the state’s biggest.

“What’s special is the kids,” Reading coach Rick Bailey said. “Basically we played that (2016) year with a junior varsity team at the varsity level. We went 3-6, but we competed in every game. They decided back then they were going to make it happen.”

Friday morning was going to be filled with firsts, regardless of the winner. Breckenridge also was making its first MHSAA Finals appearance in football, and both teams were undefeated heading into the day.

Reading (13-0) rarely had been stopped this season – even the local police escorted the Rangers through a few red lights early Friday as part of an escort kicking off the morning march.

But they knew they were in for some challenges right away. First, Breckenridge stopped Reading on a fourth down play at the Rangers’ 32-yard-line just four minutes into the game. The Huskies followed up by scoring the game’s first touchdown, converting two fourth downs on the way to the end zone.

Reading had been giving up only 7.2 points per game, and Breckenridge suddenly led 6-0. Game on. But the Rangers’ defense – one of the most impressive in any division this fall – brought things back to even with a Finals first.

With just over a minute left in the first quarter, senior Caleb Miller’s 42-yard punt pinned the Huskies on their 1-yard-line. On the next play, Miller got a sack and the ball came loose, and junior Elijah Strine ended up with it in the end zone – the first fumble recovery for a touchdown in MHSAA championship game history. Senior

Ethan LoPresto’s 2-point conversion run put the Rangers ahead, to stay, just 14 seconds after one of the few times they trailed this fall.

“We were down when they scored first – we’re not use to that. We’re not used to teams scoring much on us at all,” Miller said. “That got the momentum up and really helped us out.”

Bailey said Breckenridge (12-1) had the toughest defense his team had seen this season. And the Huskies didn’t let up despite the disappointing and historic turn of events. But Reading began to grind, adding a touchdown on a drive of 5 minutes, 10 seconds, midway through the second quarter and extending the lead to 24-6 on a Price score to cap a 5:39 drive to start the third period. 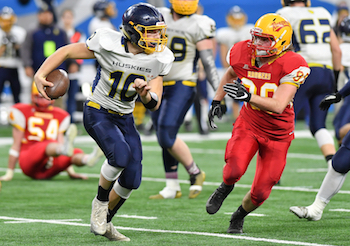 Breckenridge still didn’t go away, and that was saying a lot against a Reading defense that also had given up just a little more than 500 rushing yards total and only rushing touchdown over the first 13 weeks.

The Rangers held the Huskies to just 21 yards rushing for this game – but Breckenridge did get a touchdown on the ground and two through the air from senior quarterback Carter Staley to senior running back Hunter Collins, who also had the rushing score.

“I was just extremely proud of everyone on our team, pushing ourselves and pushing each other and not giving up on one another,” Staley said. “That’s just what got us here.”

LoPresto led the Reading offensive effort with 123 yards on 16 carries. Junior Hunter Midtgard had the most memorable play, breaking free in the fourth quarter off a block from junior Ben Affholter for a 57-yard score. Strine also ran for a touchdown.

No player had more than five tackles for the Rangers – but as a unit they had 10 for losses and three sacks.

Staley finished 14 of 19 passing for 177 yards and the two scores, and Collins caught six passes for 55 yards while junior back Lukas Ebright caught four for 55.

Breckenridge had a similar back story to Reading – the Huskies went 0-9 in 2015 when a handful of this team’s leaders were learning on the fly as freshmen. Four years later, 11 seniors are done but next season’s returnees have played up to another full season with extra games during the last three playoff runs.

“We’ve got a plan, and we stick to it,” Breckenridge coach Kris Robinson said. “It’s good athletes coming through, but we’ve also got a process. We’ve learned as a coaching staff, and I’m hoping we can move forward from here.”