READING – Nick Affholter didn’t score a point for the Reading Rangers this season. No touchdowns, no extra points, no 2-point conversions.

“As a coach, he has been my nightmare,” Concord coach Max Clark said.

“When game-planning for the last three years, we’ve had to begin our planning based on how we can avoid him,” said Matt Schwartzkopf, head coach at Springport.

Frank Keller of Jonesville recalled a specific play that painted the picture of Affholter’s impact.

“I remember one time we ran a sweep on the other side of the field, and he tackled our running back for a two-yard loss – on a sweep,” Keller said. “He was just dominant on both sides of the ball. He’s the best kid on the field.”

Those coaches are happy they won’t have to worry about Affholter anymore. Tonight, he’ll lead his 9-1 Rangers in a District Final against the undefeated Cassopolis Rangers. For Reading, it’s a chance to continue a journey that could the program back-to-back Division 8 championships. Both coaches will tell you the game starts up front, and that’s where Affholter excels.

“He’s been dominant the last couple of years,” Reading head coach Rick Bailey said. “I think last year our running back (Ethan LoPresto) stole a lot of the spotlight, but people knew how good Nick was. He’s the most dominant one-on-one football player that I’ve ever seen at the high school level. This is the first time I can remember in my 35 years that an offensive lineman was selected the league MVP.”

Affholter is a multi-sport, four-year varsity football player, a class officer at Reading – where he carries a 4.0 grade point average – and a member of the National Honor Society and leader of the school’s chapter of Fellowship of Christian Athletes.

Clark also saw something else in Affholter.

“He has never been anything but an amazing sport and leader,” the Concord coach said. “He stayed after, cleaning up the bench after a basketball game at our court when most of his team was all out chatting with family and friends.”

Reading is in the midst of a dominant run in football. When Affholter was a freshman, the Rangers had their second consecutive 3-6 season. As a sophomore they improved to 8-3, before bowing out of the Division 7 playoffs with a loss to Cassopolis. Last season, Reading ran the table, going 14-0 while scoring 678 points and giving up just 114 in finishing the season at Ford Field.

This year, Reading had to replace last year’s league MVP in LoPresto and started the season with a 14-0 loss to 2018 Division 7 champion Pewamo-Westphalia. Since then, however, the Rangers have been incredible, winning nine straight games while shutting out four opponents and outscoring all of them by a combined 449-38. Reading averages 420 yards rushing a game.

Affholter is a two-way starting lineman. On offense, he plays tackle and gives Bailey the closest thing to a sure thing.

“We’ve been able to dominate teams on his side. We just count on Nick’s block as a win,” Bailey said. “His technique is good, but I think people would be surprised of how athletic he is. If they watch him, they’ll see he can run. People are always surprised with his quickness and foot speed. It’s hard to simulate what he’s going to do.” 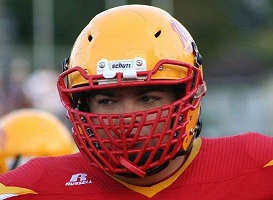 Affholter is also a difference-maker on defense.

“Two of our opponents simply chose not to run the football, and only a few tried to run it on his side,” Bailey said. “One team just lined up and threw the ball on every single play, except the last play of the game when they ran the ball when he was out.”

“I showed up to Reading with a completely different offense because of him and his brother,” Clark said.

Affholter has taken the postseason accolades in stride.

“I worked really hard for it,” he said. “It’s nice to see offensive lineman get some love. Just because we don’t touch the ball doesn’t mean we aren’t impacting the game.

“I don’t know how many offensive linemen get recognized like that. I figured I’d get all-conference, and that would be that. Seeing other people notice me and not just a running back or quarterback is pretty awesome.”

Affholter said he is 6-foot-3, 300 pounds, which makes him a half-inch taller and 20 pounds heavier than his twin brother Ben.

“I love playing football with my brother,” Nick said. “We do everything together. My little brother is up on the team now. He’s 6-foot, 230. He’s still growing.”

Their dad was an All-American offensive lineman at Hillsdale College, and their mom played volleyball there. Nick started playing football in grade school, where his grandfather began teaching him footwork.

“I love finishing my blocks,” he said. “I get excited when I get a pancake block. That was always special to me.”

He’s a student of the game, too, spending hours each week studying film of his opponent.

“I watch a lot of film of the defensive linemen or the offensive linemen,” Affholter said. “You can figure out what they are going to do in certain situations, see what their favorite move is. You know what to look for when the play starts. It definitely gives you an edge.”

Reading is sure to lean on Affholter tonight. The visiting Rangers have been just as stout as the home Rangers, outscoring opponents 403-17 this season.

“It’s going to be a great game,” Bailey said. “They are a big play waiting to happen.”

Affholter says the Reading home crowd will be rocking at Barre Field.

“Being out there on the football field is home,” he said. “It’s amazing. Every Friday night the stands are always full. I think it rivals any small-town football community anywhere.”

FOOTBALL: (Top) Reading’s Nick Affholter lines up against Mendon during last week’s 38-0 playoff win. (Middle) Affholter, who also has a twin and younger brother on the varsity. (Photos courtesy of the Reading athletic department.)