Not by choice. It’s been by necessity — since a painful football decision was made in September 2016. Many of Michigan’s smaller schools have made a similar decision.

Most of the numbers, the Norsemen can use just one hand to count. Some take two hands. Others you can’t use your hands. We’re not talking illegal use of the hands either.

The first number is 11, the healthy and available Norsemen for their third game of 2016, their last season of 11-man football.

Hand counting starts now with 1. The 2016 quarterback and only football player to join the soccer team, Jack Pasche, actually kicked off to start of the Norsemen’s homecoming game win that season against Glen Lake. Suttons Bay, known as NorthBay through a co-op with Northport and Leelanau St. Mary’s, beat Glen Lake 4-0 as the soccer match took center stage for homecoming due to the tough decision to forfeit the remaining seven games on the 2016 football schedule.

Move on to the number 8. The Norseman started competing in 8-player football in 2017 and went the playoffs, losing to eventual champion Central Lake. Fast forward to 4. Garrick Opie took over the head coaching duties and just completed his fourth season.

Now to 5. Suttons Bay, which also co-ops with Leelanau St. Mary’s for football, has lost only five games total over Opie’s four seasons. Back to one … just one loss in regular season. The other four came during the MHSAA Playoffs.

Before getting to 3 – perhaps the most notable number – count to 14. That’s the number of players on the 2021 Suttons Bay football roster – and six of them were seniors.

Pasch has coached football for 47 years. He has a long history with Suttons Bay and Leelanau St. Mary, including providing guidance in basketball, volleyball and track. He’s also been on the sidelines for Beal City and Traverse City St. Francis.

He’s had long stints as an assistant for legendary coaches Larry Sellers of St. Francis and Joe Trudeau of Suttons Bay. He was with St. Francis when they won the Class C championship in 1992.

Among those coached by Pasch on that ‘92 Gladiators team was Mark Bramer, a four-year letterman with St. Francis and the father of Shawn Bramer. The younger Bramer scored the game-tying touchdown in Suttons Bay’s 42-36 overtime win against Rudyard in the Division 1 Semifinal three weeks ago.

The junior running back Bramer, who attends St. Mary, was one of three Norsemen named first-team all-state. The other two were wide receiver Brayden Opie and defensive lineman Cam Alberts.

Mark Bramer has been thrilled to have his son play under his former coach and enjoy the playoff runs the past three seasons. 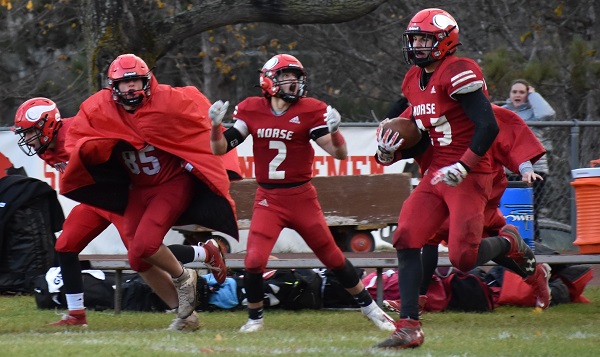 “Coach Pasch still has the passion and the spark and everything,” Mark Bramer said. “He hasn’t really changed, and it’s a good thing.

“I know the excitement as an athlete and now watch it as a parent – it is a great community thing,” he continued. “As a player back then, you never really knew that side of it, and now on the flip side you get to see the excitement of the community.”

Pasch came back to the Suttons Bay coaching staff in 2000 and has been there since. He credits Opie’s leadership for the Norsemen reaching championship games each of the last three seasons.

“Garrick does a great job of leading the team,” Pasch said. “He has really worked hard to solidly the passing game with the kids and getting the kids to believe in themselves.

“He has done a lot of good things and really opened up the offense,” Pasch continued. “When you need a big play – which the kids have done quite a bit – the kids pull it off because they had fun with it in practice.”

Opie, who previously coached all his players in Pop Warner football, has compiled a 43-5 record at Suttons Bay. He too is thrilled to have Pasch and his experience on the sidelines with him.

“I can’t do it without Stan,” he said. “Not only is he my right-hand man … he brings so much experience from his St. Francis days and his 260-plus games with Suttons Bay.

“His experience and way he deals with young men … Stan is invaluable.”

Now back to the number 3. The head coach’s sons Bryce, Braden and Grayson, have all played for Suttons Bay during playoff runs. Grayson will be back next year as the Norsemen strive to make another.

Football fans know the history of John Elway losing his first three Super Bowls, and the Buffalo Bills losing their four straight from 1991-94. But the Norsemen players aren’t really aware of it.

“They’d be lucky if they remember Brett Favre,” joked the Mark Bramer. “I have to tell them about Barry Sanders!”

Opie can laugh about it too as he knows the Norseman can rebuild again. Mike Lodish, a personal friend of Opie and former all-state player with Birmingham Brother Rice, held the record for most Super Bowl appearances with six until Tom Brady broke it. Lodish played his first four with the Bills and then won two with Elway. He played five years with the Bills under coach Marv Levy, and six with the Broncos.

“Every year it is our intentions to get to the state finals and win one,” he continued. “Is it a prediction? No. I never do that.”

Opie and Pasch will work in the offseason that number 1. They’ll use a familiar formula.

“I never make any assumptions about any season no matter what players we have,” Opie said. “We’ve had a lot of talent, but we’ve also been able to place kids in the spots (where) they will best succeed.

“We never want to put them in a spot where they will fail,” he went on. “Our goal is to find where each young man can succeed, and we’ve been very fortunate we’ve been right many of the times the last four years.”

PHOTOS (Top) Suttons Bay coach Garrick Opie hugs his son Brayden at midfield after Brayden caught the game-winning touchdown pass in the Semifinal. (Middle) Shawn Bramer outruns his stunned teammates on his way to the game-tying score during the final seconds of regulation against Rudyard. (Photos by Mike Spencer.)