DETROIT – Michigan high school football players, if they’re most fortunate and their teams uncommonly successful, can play up to 20 playoff games during their careers.

Saturday morning at Ford Field, Ishpeming seniors Ozzy Corp and Thomas Finegan joined that exclusive club. And with membership came a few lessons available to those who have experienced two MHSAA championships and a runner-up finish.

Don’t get frazzled when trailing by two touchdowns early. Don’t be fazed when a record-setting running back is galloping at you play after play after play.

And above all else, don’t forget a game has two halves – and their team tends to own the second one.

Despite trailing into the fourth quarter and failing to slow Pewamo-Westphalia’s Jared Smith over the first two, the Hematites stayed calm – and came back for a 22-16 win to clinch their third Division 7 championship in four seasons.

This Ishpeming four-season has run included championship game wins twice over Detroit Loyola and now P-W, to go with a loss to Loyola in last season’s MHSAA Final. The Hematites were a combined 13-0 this fall and 52-2 over the last four seasons, losing only to Loyola last year and rival Negaunee midway through 2012.

Those are some incredibly impressive numbers – and would have been only a little less impressive if the numbers from Saturday’s first half would’ve stood up over the entire game. 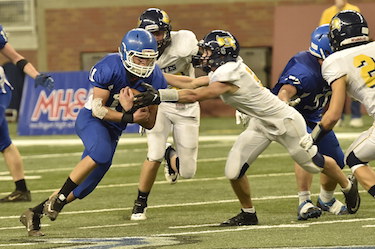 Pewamo-Westphalia junior running back Jared Smith, who finished this season with single-season records of 3,245 yards and 53 touchdowns rushing, had 112 and his lone score by halftime as the Pirates (13-1) held on to a 16-6 lead after scoring the game’s first two touchdowns and running 20 of the first 27 offensive plays. P-W’s first possession ended with a turnover on downs at Ishpeming’s 1-yard line after senior defensive end Luke Kuliu came up with a goal line stop.

But not impossible to stop after all, as Ishpeming showed during the second half.

The Hematites picked up momentum with a 13-play drive that took up half of the second quarter before Corp scored his team’s first points with 2:41 to go in the second quarter. They carried it through the third quarter as both teams resorted to ramming their best runner back and forth against each other – Smith at times taking direct snaps for P-W and Corp blasting ahead from the shotgun for Ishpeming.

But the results were sharply different from the first half. Ishpeming gained 135 of its 211 yards during the third and fourth quarters as Corp added touchdown runs seven minutes into the second half and with 3:52 to play – the final score coming after a drive of 14 plays over nearly 8 minutes.

P-W managed only three first downs and 43 yards over the final two quarters, as Smith was contained to 37 yards rushing on eight carries. Ishpeming held onto the ball for 15 minutes and 19 seconds total in the second half to the Pirates’ 8:41 – controlling tempo a lot like P-W during the first quarter and a half.

“Because it’s our gameplan too,” Olson said. “When you’ve got two teams, something’s gotta budge.

“In the first half they were winning the line of scrimmage. I think we threw a couple of passes to try to loosen them up a little bit, back them up. But I think we did wear them down. I could see them breathing hard in the fourth quarter, definitely that last drive.”

P-W did have one chance to tie after taking over the ball at the 50 with 3:42 to play. The Pirates drove to Ishpeming’s 32-yard line, but with less than a minute remaining had to go to the pass for only the fourth and fifth times on the day. Both were incomplete – the last knocked away like a basketball blocked shot in front of the end zone by the 6-foot-5 Corp.

He ran 32 times for 128 yards and three scores after gaining only 33 yards on the ground during the first half. He also completed 6 of 11 passes for 77 yards and led the defense with 10 tackles. Senior defensive back Nick Comment had nine tackles.

P-W sophomore quarterback Jimmy Lehman did connect on a 50-yard touchdown pass to sophomore tight end Bryce Thelen during the first half. Senior linebacker Nate Jandernoa led the Pirates with nine tackles as they made their second appearance at Ford Field to go with a runner-up finish in Division 7 in 2011.

P-W will graduate seniors who filled only seven starting positions Saturday. A large group of expected returnees will play to get back to Detroit to take advantage of the knowledge they gained facing the most experienced tournament team in the state.

“It’s big for us to come in here, for our guys to get a look at what it’s like,” Smith said. “We’ve got a lot of guys coming back next year, so hopefully we’re coming right back with experience. We played a pretty good game, but next year we’ll know exactly what to expect.”

PHOTOS: (Top) Ishpeming quarterback Ozzy Corp reaches across the goal line for one of his three touchdowns Saturday. (Middle) Ishpeming running back Isaac Olson charges ahead through an opening in the Pewamo-Westphalia defense.