Football historians can debate this forever.

Tonight at Rodes Field in Kingsley – perhaps for the first time in Michigan High School Athletic Association history – three teams with perfect records will meet each other on the same football field in the same game.

Two of them, Traverse City St. Francis, and Kingsley, are playing for the right to boast of an undefeated regular season and an outright conference championship. The third team and its captain — better known as the referee crew — has already been assigned a first-round playoff game by the MHSAA.

Where they will go hasn’t been determined, but Joe Dechow’s crew knows it will referee at least two rounds this postseason. The veteran crew already has assignments from MHSAA but just like the schools, the crew is waiting for the postseason pairings to be announced Sunday.

Dechow, the crew leader and an MHSAA 41-year veteran official, will put on his white cap and be ready for the 7 p.m. kickoff tonight knowing Kingsley/St. Francis is a big, big game. Dechow’s crew members will go into kickoff confident they know at least one team that will win, just like every game they’ve done together for about the last 20 years are so.

But how officials define their victories is different, Dechow explained.

Taking the field with Dechow tonight will be umpire Joe Johnson, back judge Roark Pargeon, line judge Brett Spalding, head linesman Jeff Bretzke, side judge Peter Moss, and field judge Rick Zych.  All seven officials worked together in the Betsie Valley Officials Association for many years and have continued together as a crew with the Northern Sport Officials Association after the two combined a few years ago. 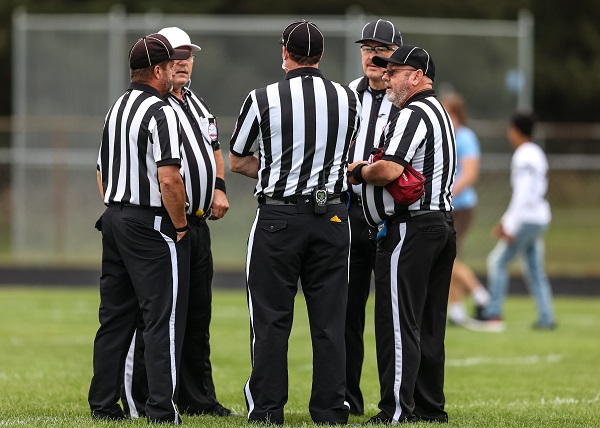 “We don’t win or lose, but we’re a still a team,” he said. “One of the great things about working with the same guys for years and years is you know where people are going to be, and you know how they’re going to take care of things.

Dechow’s team has taken the field every week for decades for the benefit of student-athletes. Moss has been an MHSAA registered official for 44 years. Spalding and Zych have been registered 36 years. Bretzke, Johnson and Paragon follow with 22, 20 and 16 years of MHSAA service, respectively. All officiate at least two sports.

Dechow was on the wrestling and football teams at Maple City Glen Lake High School. Upon graduating, he started officiating wrestling — at the age of just 18.

“That got interesting, you know, because you go from a player to a ref all at once and all these old coaches are looking at you like ‘Who are you, kid?’” Dechow recalled.

Dechow has been officiating football for 36 years and was a registered wrestling official for 15. There have been a few times he’s considered giving up the white cap that signals he’s the game’s referee. (The white cap originated to benefit television viewers for college and the National Football League.)

The referee has general oversight and control of the game. Dechow is the final authority for the score, the number of a down in case of a disagreement, and all rule interpretations when a debate arises among the other officials. He’s also the only official who wears a white hat; all the other officials wear black hats.

The “white hat” also announces all penalties and confers with the offending team’s captain, monitors the quarterback area during the game, requests the linesmen to bring the yardage chains in for first down measurements and notifies the head coach of player ejections.

Dechow was ready to put his white hat down for a while when he first attempted to give up refereeing due to family and career demands. He was planning to get out and was asked to help another crew for a “few” games.

“I was going to just do a couple of games, and then somebody else quit and I wound up getting back into it,” he said. “There was another white hat that had left just before the season started … so all of sudden I started hearing ‘Do you still have a white hat? Would you like to maybe …’ 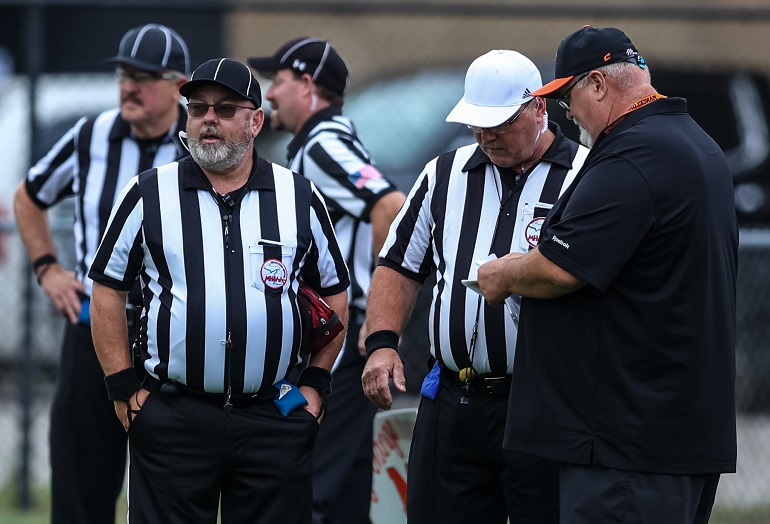 Dechow’s crew has seen a lot of changes in MHSAA football during their careers. Rules to improve safety have been their favorites. They have also seen the addition of 8-player football and the use of two-way radios.

But it’s positive changes in sportsmanlike conduct among players, coaches and fans Dechow excitedly singles out.

Everyone, Dechow notes, is noticing the lower number of recruits joining the current officials in all MHSAA sports.

“More people appreciate the fact that we have to be out there, and we’re not out there to get anybody,” he said. “By and large the coaches are great.

“Of course they are emotional and of course they are pulling for their team and they’re going to argue for the right outcome for them,” he continued. “Over the last several years we have seen an absolutely marked change in people – spectators, players and coaches — all providing a lot more respect the officials.”

The crew had tonight’s game on its schedule at the beginning of the season. The guys couldn’t help looking ahead to how big a game it could be.

St. Francis coach Josh Sellers and Kingsley coach Tim Wooer probably had a better idea of how big a game it could be when they — and football enthusiasts all over Northern Michigan — likely circled it on the calendar. Kingsley won last year’s match 36-23 at Thirlby Field, the Gladiators’ home turf.

This year the Stags host with the Northern Michigan Football Conference’s Legends division championship on the line.

“Sports mean a lot to kids,” Dechow pointed out. “They meant a lot to us.