GRAND RAPIDS – Patience explains much of why the Bellaire girls basketball team finds itself on the brink of history.

The Eagles charged into their first Division 4 championship game with a methodical 48-29 win over Petersburg Summerfield in Wednesday's Semifinal at Van Andel Arena.

Bellaire wasn't necessarily flashy, but used a hefty rebounding edge, a stingy defense that allowed just three second-half baskets and a balanced offense to earn the trip to Friday's 10 a.m. championship game at the Breslin Center against Fowler.

Doing a bit of everything right is why the Eagles will play for their first-ever Finals title, coach Brad Fischer said.

"We want to be patient offensively," he said. "It's hard to key on any one person for five or six passes. We like to work the ball around and keep the team concept. (Defensively) we've played against teams with 3-point shooters, and we don't want to let too many 3-pointers off."

"We keep telling the girls defense, defense, defense," Fischer said. "It's a cliché, but it comes up again. It was kind of an odd game in that we didn't move our feet at times, and we were a little undisciplined. But the longer a game goes, the stronger the girls get in ratcheting it up." 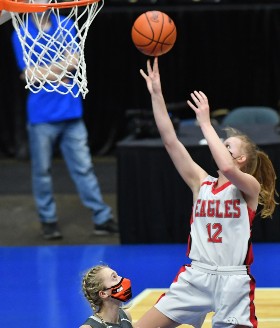 "Their ability to anticipate, to extend our zone took us off guard," she said. "Once we got through that, it opened things up for us. Their defense was longer than we expected."

"They outworked us, outrebounded us," Moody said. "They put more bodies on us, and we didn't attack the basket like we usually do. We pretty much went side to side. I thought we played pretty decent in the first half and got their best player in foul trouble, but we missed a lot of opportunities. We should have attacked a lot more. But in the first half we were fine, we just missed some opportunities."

Summerfield got nine points from Destanee Smith, while Grace Kalb and Breanna Smith each had six points.

"They were aggressive and put pressure on us," Kalb said. "It was a lot like our Regional Semifinal. When we'd drive on them, they weren't afraid to put a body on us."