GRAND RAPIDS – By Bree Salenbien’s admission, she was “kinda out of it” during Saturday morning’s Division 4 Final at Van Noord Arena.

But that gave Adrian Lenawee Christian a chance to show this year’s title was won by a fully talented team in addition to being paced by one of the state’s top sophomores.

The all-stater and no doubt early candidate for the 2021 Miss Basketball Award was as off as 17 points, 13 rebounds and six assists can be, perhaps. But junior sister Dani Salenbien scored a game-high 19 points, and as a team the Cougars held St. Ignace to its season low for points – and held on 48-46 to earn their second-straight championship after claiming the Class D title a year ago.

Scoring came to a standstill as both teams locked down defensively during the second half. Lenawee Christian didn’t even have a field goal during the fourth quarter and scored their second-fewest points of this winter. But the Cougars held onto the lead for all but 26 seconds of the final period and made a pair of defensive stops over the final two minutes to keep from relinquishing it at the end.

Lenawee Christian finished 26-2, its only losses to ranked Division 3 teams Grass Lake and Michigan Center. The Cougars are a combined 52-3 over the last two seasons – and of the seven players who saw the floor Saturday, only guard Brooke Brinning was a senior.

St. Ignace (27-1) was going for its first championship since winning Class C in 2015, and first 28-0 finish of its storied history. The Saints should also be considered major contenders again next season, as they’ll graduate significant senior forwards Emily Coveyou and Madison Olsen but are set to return the rest of this season’s roster.

The teams Saturday couldn’t have been more perfectly matched, with the 6-foot-2 Bree Salenbien and 6-foot Coveyou used to carrying the offensive loads for their respective teams while talented casts provided perhaps underrated contributions around them.

The score was tied 10 times and for 9 minutes and 35 seconds total. At the end of it all, the deciding basket may have been sunk just before halftime. After Bree Salenbien and St. Ignace sophomore guard Emmalee Hart traded 3-pointers to make the score 30-30 late in the second quarter, Dani Salenbien sank a 2-pointer with nine seconds to play in the first half that gave her team a slight edge heading into the break.

And Lenawee Christian would end up needing every point. 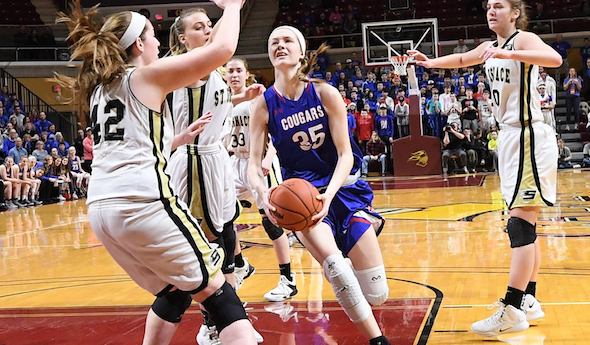 “I can kinda just tell if she’s in a little zone,” Cougars coach Jamie Salenbien said of his eldest daughter on the team. “And it looked like she was, so we just wanted to try to get her in good spots. She was feeling it tonight. … She’s got a real good change of speed, change of direction. So it helped at the end of the second quarter, when she got to the baseline and laid it in.”

St. Ignace made 30 percent of its shots from the floor for the game, and Lenawee Christian connected on 33 percent. St. Ignace applied its signature press, and the Cougars had 21 turnovers. Lenawee Christian had a plan to press as well during the fourth quarter – “but that got thrown out the window,” coach Jamie Salenbien said. “We just tried to hang on at the end. With the amount of good defense being played out there, it was hard to get good looks. … They were up in our grill.”

The Saints dominated below the basket as well, outscoring Lenawee Christian 28-10 in the paint. But the best “all-in” effort by Lenawee Christian – keeping with the team's motto this season – came in limiting St. Ignace’s 3-point shooting, as the Saints could connect on only 2 of 18 from beyond the arc.

“I’m proud of our kids, their stick-to-itiveness even though we couldn’t make a shot,” St. Ignace coach Dorene Ingalls said. “We kept at it, kept fighting. … We knew it was going to be an epic game, but we fell a little short. They definitely were there all heart, and I’m proud of them.”

Coveyou scored 17 points to lead St. Ignace, and sophomore guards Hallie Marshall and Hart both added 11 and combined for seven of the team’s nine points during the fourth quarter. Marshall also added three assists and four steals, and the defensive-minded Hart had six rebounds and one steal and many more contributions that didn’t show in the box score. Her basket during the final second made the final margin.

“Even though we didn’t win today and have the season we hoped for,” Coveyou said, “it still doesn’t take away from the awesome season we had.”

Bree Salenbien – who made the game-winner to send her team to the championship game a year ago – connected on only 3 of 14 shots Saturday. But Dani Salenbien made 6 of 11, and Brinning, junior guard Libby Miller and freshman guard Cara Anderson all added four points. Despite the lack of a field goal, the Cougars made 10 of 11 free-throw attempts in the fourth quarter, and Bree Salenbien finished 9 of 10 from the line for the game.

“I’m so proud of the culture these girls have created, led by my seniors Brooke and Grace (Beach), and our captain Dani and the rest of them. Everybody’s accepted their role in an era when, quite frankly, no one wants to share,” Jamie Salenbien said. “These girls are all about sharing, commitment, trust, love, sacrifice and their faith, and it’s carried us through to here.”