EAST LANSING – Clara Loukus was all jitters when Thursday’s first Class C Semifinal tipped off at the Breslin Center. And her coach Jeff Twardzik knew it.

But he also could tell from the way she launched her 3-point shot with three minutes to play that it would find the bottom of the net – and more importantly, that she was ready to carry the Copper Kings to their first MHSAA championship game.

Loukus scored one third of Calumet’s points and spearheaded a defensive effort that stopped undefeated Laingsburg cold over the final seven minutes of the fourth quarter.

And the Copper Kings indeed moved on, edging the top-ranked Wolfpack 30-26 to advance to Saturday’s 4 p.m. Final against Flint Hamady.

“Last night I couldn’t sleep. ... The first half I was riled up,” Loukus said. “The second half came, and I calmed myself down, got my got my rhythm. I knew I had my whole team behind me, and I had to do this for them.”

Stingy defense played a part in both teams advancing to the Semifinals this season for the first time. Laingsburg (26-1) gave up only 25.7 points per game entering Thursday, while Calumet (23-2) wasn’t far behind that pace, allowing 32.5.

And that certainly played out from the opening tip. Laingsburg did make 50 percent of its shots during the first half – but launched only 10 times. Calumet shot 10 percent better during the second half than the first – but only 39 percent from the floor over the final two quarters and 32 percent for the game.

Although the Wolfpack made only two of 11 shots during the third quarter, the Copper Kings still trailed 23-21 when a Laingsburg turnover at 7:14 of the fourth started a run that will be among highlights of Calumet’s historic trip downstate.

The Copper Kings earned that turnover with their fullcourt press, and tied the score on junior Leah Kiilunen’s basket with 6:26 to play. Calumet then forced another turnover, and then another when Loukus gathered a steal with 5:06 on the clock.

The teams traded missed shots until senior Alexis Rowe dropped in a layup with 4:22 to play to give the Copper Kings a 25-23 lead. Another miss and turnover set up Loukus for her game-deciding 3-pointer with 3:02 to play.

“She’s that heartbeat that never quits,” Twardzik said. “You never quite now when it’s going to come, but that 3-poiner, I could tell when it left her hands. The kids were nervous coming in, understandably. But I could tell she calmed down, and she took that shot in rhythm.” 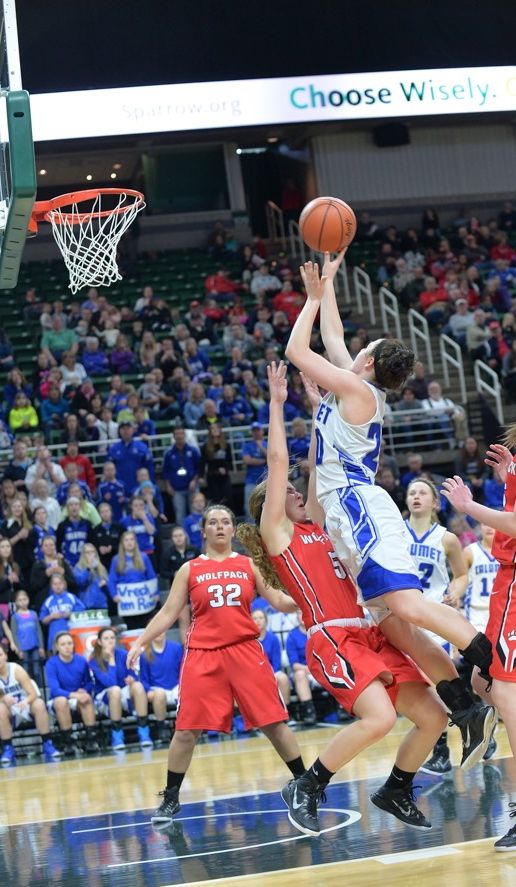 Laingsburg did score its first and only basket of the final period with 1:26 to play to pull within 28-26. But the Wolfpack turned the ball over twice more, the second time on a pass into the middle of the lane that Loukus intercepted. She was fouled and made both free throw attempts with nine seconds to play.

“I turned to my assistant and I said, ‘She’s going to make these two,’” Twardzik said. “That’s the way she’s built.”

Loukas finished with 10 points and five steals, and Rowe added seven points. Junior 6-foot-2 center Janie Torola came off the bench and became an obstacle in the middle playing all but two minutes of the second half, and she grabbed nine rebounds and blocked three shots to go with seven points.

"For the last four or five games, we've struggled a little bit with our offense. We've been managing to score in the 30s or 40 range, and with our defense that typically gives us the opportunity to win," Laingsburg coach Doug Hurst said. "Tonight it was a credit to their defense as well, a lot of it to their defense, actually. … They're big, they're long, and that kinda changed things a little bit."

Calumet entered the tournament unranked, and traveled 500 miles to East Lansing after making their first Quarterfinal appearance Tuesday since 1977.

“This is everybody’s dream, to get here. And when you step into the first practice, you talk to the kids; why not dream big?” Twardzik said. “I truly believed in this group of kids. I’ve had an opportunity to be a part since they were very young, (because) my daughter (Ellen) is a senior.

“In my wildest dreams, did I have this dream? Yes. Did I believe it could be true? Absolutely.”

“We come from a small town. Not a lot of people know about you,” Rowe added. “I remember yesterday, coming down in the gym, everybody’s eyes were wide open. Friday we’ve just got to go back to the mental (preparation), and Saturday just wake up and play our game and be ready.”

Click for the full box score and video of the press conference.

PHOTOS: (Top) Calumet's Abby Bjorn (44) works to get around Laingsburg's Sara Hurst on Thursday. (Middle) The Copper Kings' Alexis Rowe goes up for a shot while Julia Angst (5) works for a stop.