GRAND RAPIDS – The possibility of a Chassell basketball team playing for an MHSAA championship for the first time since 1958 was within reach with a half remaining Thursday.

But earning that opportunity would take some work.

The Panthers trailed Waterford Our Lady by nine during their Class D Semifinal at Van Noord Arena – and senior point guard Milly Allen had an uncharacteristic eight turnovers.

“At halftime we realized we needed to push, and that if we played our game we’d be perfectly fine,” Allen said. “We came out in the second half, kept chipping away.

“We worked together as a team. We told each other we need to come out, we need to bounce pass, we need to be smarter with the ball all together.”

Chassell had only three turnovers as a team during the second half. Allen had none. And the ball spent most of the final minutes safely in her hands as Chassell’s girls team continued its longest run in program history with a 55-51 victory.

The Panthers’ Regional title last week was the first won by either the girls or boys basketball programs since the boys won three straight Class D titles from 1956-58.

“This means the world. They’ve earned it,” Chassell coach Brandi Hainault said. “They’ve worked hard, and we always knew we could get here. … I guess in our minds, this is where we were going to go. For it to happen, it’s just an amazing feeling.”

Some big-time second half efforts made it reality.

Four players combined to score all but two of Chassell’s points – Allen finished with 17, senior center Sydney Danison 15, senior forward Meg Hokenson 10 and junior guard Jenna Pietila 11. But they’d combined for only 24 of those 53 points during the first half. 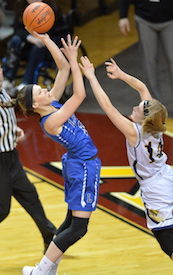 Allen scored 11 of her 17 during the final two quarters, and also finished with five assists and three steals – and plenty of praise from Our Lady coach Steve Robak.

“(She) was very fast and we didn’t do a good job containing her. She was able to get around us when we’d try to press or trap, and that’s what created the most problems,” he said.

“They tried to get the ball to (Allen) every time and have her try to do her thing, which is use her speed. Maybe in the first half we did a better job containing her, but I felt like most of the game we had trouble with (her) when she had the ball.”

The 6-foot-1 Danison also made an impression during the second half with nine of her points and a strong presence defensively.

Our Lady had only nine turnovers for the game – but along with the tough shooting night was outrebounded 36-25.

Our Lady has had its share of storybook endings lately with three Semifinal runs over the last four seasons and three championships over the last eight.

In Chassell, stories of the 1956-58 boys championship teams continue to be told. Now the girls are carving out their place in local and state history.

“It’s awesome for them. They had three state championships, and that’s something you’re going to talk about for the rest of your time around,” Hainault said. “I guess we want to start our own story.”