EAST LANSING – St. Ignace is used to driving three hours to East Lansing for the last weekend of girls basketball season. This marked the sixth straight they’ve made the trip.

But only one other team has come from so far back to win an MHSAA championship.

With good reason, St. Ignace looked like a 2014-15 runner-up in the making trailing undefeated Pittsford by 20 two minutes into the third quarter of Saturday’s Class D Final. But the Saints never saw it that way – and launched a comeback that tied the largest in MHSAA girls basketball championship game history.

The Saints needed overtime to finish the run, but edged Pittsford 64-60 to claim their third title in five seasons.

“A lot of heart. You have to come out there and give it your all, after halftime, and we tried to,” said St. Ignace junior Abbey Ostman, whose 31 points tied for 11th most in a girls MHSAA Final. “I felt like my teammates were trying really hard, and I felt I needed to step up to help them. I knew they were here to give it their all.”

And that’s what it took for the Saints to claim their fifth championship in historic fashion.

The comeback tied Detroit Cass Tech’s in the 1987 Class A Final, when it came back from 20 down in the third quarter to defeat Saginaw 52-51 at Grand Valley State University.

The Saints (22-5) trailed Pittsford 41-21 just two minutes into the third quarter after a first half that saw St. Ignace uncharacteristically miss all nine of its 3-point attempts and shoot only 32 percent from the floor. The Wildcats, meanwhile, made half of their shots and 5 of 11 from behind the arc.

But a half, and more, remained to play.

“I told (my players) they were going to make a run. We had to weather it, and we didn’t,” Pittsford coach Chris Hodos said. “I didn’t know if it would be Ostman or (Margo) Brown who would get hot. I just didn’t know. They have two senior players who have been here a lot of times, and they know how to win games.” 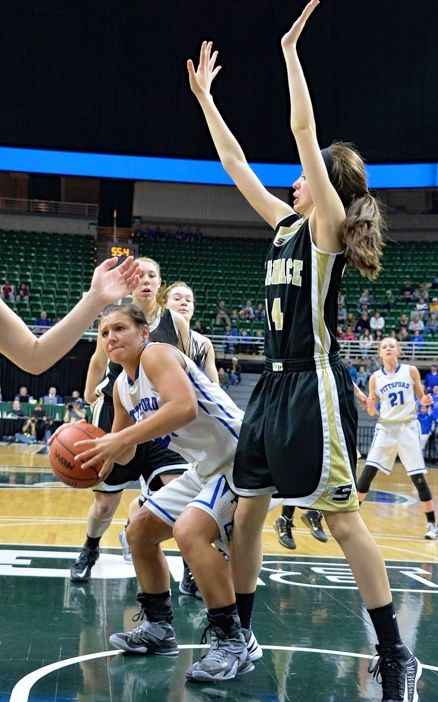 Brown was the hero of Thursday’s Semifinal, when the Saints came back from 13 down to beat top-ranked Frankfort on the wave of her seven straight 3-pointers during the second and third quarters.

She followed Ostman on Saturday with 19 points, and only one 3-pointer this time. But that shot pulled the Saints within 48-43 just 17 seconds into the fourth quarter – and four minutes later she was fouled on a made lay-up and added the free throw to cut Pittsford’s lead to 50-49.

“Margo’s got the biggest heart out of any player I’ve ever coached,” said St. Ignace coach Dorene Ingalls, who has led the Saints for 16 seasons. “It’s heart like that as a senior, to come out and have two comeback wins, down 20, and never give up.

“When she makes that (3), the kids start to believe, but the other team starts believing, ‘Uh oh. We’re in trouble,’ if they watched the other game’s second half.”

Ostman made the score even for the first time since the game’s second minute with a free throw that tied it 54-54 with 35 seconds left in regulation. Regulation ended that way after a Brown drive during the final seconds was stopped short.

Ostman scored the first two baskets of overtime, and Pittsford answered. But junior forward Natalee Lee then gave the Saints a 60-58 lead on two free throws – and after two Pittsford turnovers Brown added two free throws as well to make it a four-point game again with 44 seconds to play.

The Wildcats got no closer.

Ostman also grabbed 10 rebounds as the Saints earned the advantage overall in that category, 42-33.

Ostman started in St. Ignace’s 2013 Class D Final win as a freshman, and Smith and guard Autumn Orm came off the bench as sophomores in that game. Senior center Sarah Smith came off the bench to play big minutes as the team finished Class C runner-up a year ago.

All of that experience surely paid off Saturday, and Saturday’s could pay off quickly for a Pittsford team graduating only two players after completing the longest tournament run in program history.

“We tried not to let the size of it and the pressure of the game get to us,” Burger said. “We learned what it’s like to play in front of all of these people, how not to get caught up in the surroundings, how not to get rattled when they make their runs. We learned how to stay focused and keep ourselves under control.”