GRAND RAPIDS – This season, the Saginaw Heritage girls basketball team had, as junior Shine Strickland-Gills called it, an “epiphany.”

And it’s made the difference between another 20-win season and getting a chance to play for the Class A championship.

Expectations have been high the last few seasons for a Hawks group that’s shown plenty of ability against big-time opponents, but never put it entirely together for an MHSAA Tournament run.

After Friday’s 46-28 Semifinal win over Grosse Pointe North, Heritage finds itself one more victory from making good on all of that potential.

“It was a disappointment (last year) because we lost in second round Districts, and we were supposed to win,” Strickland-Gills said. “We didn’t because we really didn’t come out hard, and I feel like we’ve done what we’re supposed to do. We’ve actually listened and taken heed of what (coach Vonnie DeLong) has told us. And we’ve actually applied it in a game, and it really works.

“We had an epiphany.”

A Class A title would be the Hawks’ first since 2002 and cap a fourth straight season with at least 20 wins – but after Heritage was eliminated during the first week of the tournament a year ago.

All but four of the team’s points Friday were scored by four players with lots of experience, but who also had experienced last season’s disappointment. 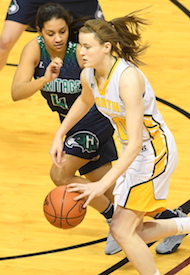 “My (coaches) go a great job scouting and really let us know what we have to do,” Joiner said. “For me, if I’m guarding the best player, I need to look at film and know what their tendencies are. Like Julia, she likes to drive and pull up, or she’ll shoot the long 3 so I have to get my hands up. It’s just a lot of paying attention.

“It was pretty obvious today; I didn’t have the best game I could have. But I knew if I could keep Julia to a certain amount of points, then my team could pick it up on the offensive end.”

Despite shooting only 38 percent from the floor over the first 16 minutes, Heritage (26-1) led by three after a quarter and nine at halftime. The Hawks kicked into gear during a 17-6 third quarter run as they drilled 57 percent of their shots and pulled away.

The 6-foot-2 Ayrault, who already has committed to sign with Michigan State, had nine rebounds and four blocks to go with her 13 points. But North (20-6) couldn’t recover from 23 turnovers, and as a team put up 18 fewer shots than the Hawks.

The 28 points were a season low by 13, but the experience should prove valuable for a team graduating only one senior.

“This whole season has been pretty much a gift to us. When we started, I didn’t think we were a very good basketball team,” said North coach Gary Bennett, who completed his 35th season. “Some time in January, things started to click a little bit and we started to become a better basketball team. And I mean a team in the truest sense of the word – we have a superstar and we’ve got role players, and the role player know they need the superstar and the superstar knows she needs the role players. And that’s kinda been our season.”