COMSTOCK — As a freshman, Abby House could not decide whether to play volleyball or golf, so she compromised and did both.

Little did she know that first dual-sport fall season would put her on track to Comstock High School history.

She will graduate in May with a school-record 22 varsity letters — 21 for sports and one for band.

The previous record, set by Robert Bellisle in 1943, was 17. Bellisle was inducted into the Comstock Hall of Fame in 2011.

“I just really like sports and starting freshman year with five, I didn’t really know there was a record for it,” House said.

She has four letters each in bowling, golf, basketball and softball, three in volleyball, two in soccer and one in band.

“Primary and secondary coaches have to agree on the details before it can happen,” he said. “If we don't have their agreement along with the player understanding of expectations, we don't allow it.

“I think it's important to just give the kids opportunity. It works best with picking a team sport as the primary sport and then an individual sport as secondary.”

House’s father, Rich House, said he and his wife have no problem with their daughter playing six sports a school year.

“It wasn’t really ever a plan; it just kinda happened,” he said. “She was always good at it and has always been a good student.

“We always told her as long as she could handle it and keep up – the school work is most important. She always seemed to do a good job at that.”

Schoolwork has not been a problem for House, who carries a 3.88 grade-point average. 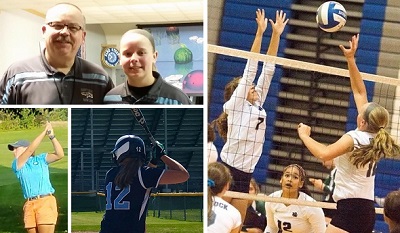 This year, she has just one class at Comstock – band – but took psychology, physics and accounting at Kalamazoo Valley Community College. Next semester, she will study sociology, chemistry and medical terminology at KVCC, working toward a degree in nursing.

Although House plays sports for fun, her dad said his daughter is a high-level competitor in all of them.

“She has multiple conference titles, qualified for state twice in golf, once in bowling, all-District catcher two years in a row,” Rich House said.

This year, she was Comstock’s top golfer and is the team’s top female bowler, carrying a 150 average.

As a freshman, House earned varsity letters in golf, basketball, bowling and softball.

She played the same sports the next year, but also was moved up to varsity in volleyball, giving her five letters.

Her junior year, House added soccer, and is continuing to play six sports her senior year.

She chose volleyball because “I played (volleyball) with my teammates since middle school and I’ve enjoyed it when I played in season,” House said.

Golf is a family affair for the House family, including her brother, Mason.

“My parents are big golfers and we’re a big golf family and the coach was really into wanting me to golf, so she talked me into it and I thought it would be fun to try,” Abby House said.

Since she started playing basketball in elementary school; it was a no-brainer to continue in high school. She was called up to varsity after a month during her freshman year.

The bowling coach had an inside track to recruiting her – it’s her dad.

Softball was her only spring sport until her junior year.

“When I was younger, I played softball and soccer, but I chose softball because I liked it more,” House said.

“We had a softball coach who wanted us to concentrate only on softball, so I didn’t play soccer.”

Her junior year, the softball coach left and House decided to add soccer, giving her two sports in each of the three seasons.

Everything falls into place

House is an expert at time management.

“In school, whenever teachers get done with notes and we have homework I try to do it,” she said. “Or with any free time I’ll do it and what’s left, I do after practices.

“Freshman, sophomore year I did a lot on the bus.”

Choosing a favorite sport is not possible.

“Everybody asks me that,” she said. “I can choose one per season, but not one overall.

“Basketball, golf, softball have always been my top.”

House has stepped up this year, helping lead the basketball team to a 3-0 overall record, 2-0 in the Berrien-Cass-St. Joseph Conference Red as a point guard, her fourth position in four years.

As a freshman she was a post player, as a sophomore she shifted to forward, and then to shooting guard last winter.

“Abby has always been a solid player even since fourth grade when (she and Daisy Ansel) started playing some travel ball together,” said Justin Ansel, who also coaches the girls basketball team.

“I think Abby has always been a very coordinated athlete, and it doesn't surprise me that she does so well in so many different things. She has contributed at a high level in a lot of sports.”

Ansel said he thinks House could be extremely good if she focused on a particular sport, but “I think she just loves competing so much that she would rather play all kinds of sports all the time.”

“Abby's start to this season from an offensive standpoint has been tremendous,” he said. “Both girls are shooting very well from the outside, and both girls are able to attack so defenses can't just key on one of them – which is amazing for Daisy.”

House will not go into sports withdrawal once she graduates.

She hopes to continue to play in college, but just one sport, either basketball or golf, she said.

PHOTOS: (Top) Abby House’s varsity letter jacket shows off many of her accomplishments over her first three-plus years of high school. (Middle) Abby House and her father Rich House. (Below) Abby House takes part in some of her sports – with her dad at the bowling center, golfing, and hitting in softball and volleyball. (Action photos courtesy of the House family. Head shots by Pam Shebest.)