Back then the team was called Suttons Bay. He had a freshman moved up from the junior varsity team named Paige Kohler. Northport High School was a local rival. Jim Champion took over as coach and all the school records were intact.

Today, Wheelock is back after a two-year hiatus. The team is now called NorthBay thanks to a co-op with nearby Northport. He has a senior named Paige Kohler in the school’s record book and she’s ready to lead her teammates in tonight’s Division 4 District Final against Lake Leelanau St. Mary.

“It was surreal to watch,” Wheelock exclaimed.  “She took everything in stride and showed great leadership and teamwork throughout.

“I had a feeling she would have a great career,” he continued.  “I don’t know if I ever envisioned this, but she has earned everything that she accomplished.”

Wheelock returned to the court where he played high school basketball this winter, inheriting back a player who has shown a knack for scoring in multiple sports – not just in basketball but also as a soccer standout during the spring.

Kohler set the single-game basketball scoring record with a 44-point performance Feb. 27 on Senior Night against Ellsworth. It broke the previous record of 43 set in 1993 by a relative, Suzanne Kohler.

“I was not expecting that at all,” Kohler said. “When the game started, I had no idea how it was going to go, but I told myself that I was going to play as hard as possible for my last-ever home game.

“As the game progressed, I continued to play with intensity,” she recalled.  “Setting the record on Senior Night, but more specifically in my last home game, I know that I will remember this forever. Senior night is already such a special night for seniors, but adding this on top of it will make it even more of a special memory.”

Breaking her cousin’s record added an extra significance for the senior point guard.

“She's family, and I come from a very competitive family,” noted the younger Kohler. “If it were a stranger, it would have merely been a record. But by knowing the person, and the story behind that record, it made it special.”

Suzanne Kohler still holds the career and single-season scoring marks at Suttons Bay and is a member of the 1,000 point club. Paige Kohler joined her cousin in the club with a 15-point performance Jan. 8 against her opponent in tonight’s District Final. NorthBay won that contest 32-26.

“I was really excited, and it instantly felt like a dream come true,” Kohler said of topping the 1,000 mark.   “After scoring the final points, I looked up into the stands, and seeing how happy everyone was, I couldn't help but feel honored to be a part of something so special. Their support means the world to me.” 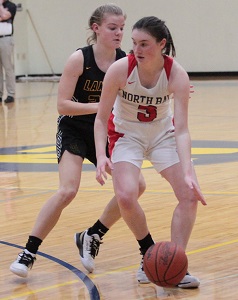 Kohler’s family also was in the stands to see the single-game scoring record shattered. Her father, Alex, a former Suttons Bay football coach, and mother, Cindy, are among the role models and mentors she has looked up to over the years.

“Number one is my mom,” the record-holder said. “She was an amazing basketball player and essentially taught me everything I know about the game. I was the kid in the gym running drills 30 minutes after practice ended, because I make a mistake or two in a game.

“I also give credit to my dad, not because he knew basketball, but he taught me what a winning attitude was,” she continued. “Every time I played a game or came home after practice he would ask, ‘Did you win?’ Over the years I've had a number of coaches, none were necessarily constant, but credit can be given to both Coach Wheelock and Coach Champion.”

Kohler has collected postseason awards after all three of her previous varsity basketball seasons. She will likely collect more this year.

“She plays fast and hard,” Wheelock said.  “She is relentless on both end of the floor and leads by example.

“She is usually the most athletic player on the floor and is always the hardest worker,” he continued.  “That makes for a lethal combination.”

The Eagles all know the number “3” Kohler wears. They will be keying on her tonight as she put in 15 points in the first meeting.

When the postseason ends, Kohler will get back on the soccer field for NorthBay. Some argue she is just as much a threat to score in soccer.

“I think that it is safe to say that I play with the same mindset and intensity in soccer as I do in basketball,” Kohler said. “If there is something I can improve on, I will work on it until I get better. I'm not afraid of hard work, and I think that shows on the field and court.”

Her basketball and soccer coaches concur.

“Her athleticism and determination and will to win,” said her second-year NorthBay soccer coach Randy U’Ren, “help her to create many scoring opportunities for both herself and her teammates on the pitch.”

Kohler contributed an average of nearly 20 goals per season during her freshman, sophomore and junior soccer seasons, and also averaged nearly 10 assists. She set the single-season assists record last spring at 14.

“It just shows how much of an athlete she really is,” Wheelock points out. “Specializing in one sport is hard enough and takes a lot of work, so to do it in both at such a high level is astonishing. I honestly don’t know how she does it.”

PHOTOS: (Top) NorthBay’s Paige Kohler works to get up a shot over Maple City Glen Lake’s Jessica Robbins (23) this season. (Middle) Kohler looks for an opening to the lane with Liliana Valkner defending. (Photos by Ron Kramer.)