In the first practice without Bree Salenbien, the Lenawee Christian girls basketball team didn’t dwell on the fact the best player in the Division 4 tournament the last couple of seasons won’t be on the court for this season’s playoff run.

“Practice was amazing,” third-year Lenawee Christian head coach Jamie Salenbien said. “The girls talked about ways to step up, and they assured each other of their foundation.”

Lenawee Christian has won back-to-back Finals championships, in Class D in 2018 and Division 4 in 2019. During each of those state championship runs, 6-foot-4 Bree Salenbien showcased the incredible talent that has earned her more than 25 scholarship offers from Division I schools across the country – including Michigan and Michigan State.

In a stunning turn of events, however, Salenbien tore her ACL with about 15 seconds remaining in overtime of Lenawee Christian’s final regular-season game earlier this week. That drastically changed the entire MHSAA tournament picture as the 17-3 Cougars – who have played one of the toughest schedules in the state regardless of division – no longer are the overwhelming favorites.

Don’t tell them that, however.

“It definitely is going to be a long hard road,” said Cougars senior Dani Salenbien, Bree’s older sister. “It’s no secret Bree is a huge part of our team, but I have no doubt that our team will adjust and come out strong when we play next.”

The Cougars have gone 15-0 the last two seasons in postseason play, winning the first two girls basketball championships in school history. The Salenbiens have been at the forefront of those title runs. Jamie Salenbien is a Hudson graduate who coached three years at Onsted before stepping down to concentrate on coaching his daughters through their youth teams.

He became head varsity coach at Lenawee Christian when Dani was entering her sophomore year and Bree was about to make her varsity debut. The result was a 26-1 season and Class D Final win over Chassell. Bree was named the Class D Player of the Year and her dad was named Coach of the Year by The Associated Press.

Last season, Dani Salenbien took more of a lead role, especially during the tournament, helping turn the Cougars’ fortunes with an outstanding performance in the championship game win over St. Ignace. Both Salenbiens were all-state choices, and this year it looked like the Cougars were destined to become one of the few three-peat champions in MHSAA history. They have been ranked No. 1 all season. The only team with a higher Michigan Power Rating than LCS is Division 2 Detroit Edison, a team the Cougars lost to as part of a rugged schedule that saw LCS face three teams that have been ranked No. 1 in three separate classes this season.

The game against Edison was played in front of a standing-room only crowd at LCS. Dani Salenbien poured in eight 3-pointers and scored a career-high 31 points, which Edison eventually pulled away and won. 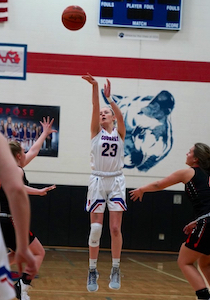 “It definitely was nerve-wracking,” Dani said. “The environment was kind of insane. I had so much fun. It was an opportunity for us to show our love of Christ and play to the best of our ability. Anytime you play a team like that, you have the chance to improve.”

“Playing 20 different teams pushes the girls to prepare and perform each game,” Coach Salenbien said. “By playing some of the best teams in the state, it hopefully prepares the girls for the toughest situations they might face.

“Facing the best requires you to dig deep and play your best.”

The game against Grass Lake on Tuesday was one of those games, two powerhouses battling on every possession. In the waning seconds of the first overtime, the Cougars grabbed a rebound and found Bree on an outlet pass. She took a dribble, then appeared to have tried to dribble the ball behind her back when she went to the floor. By Thursday, the Salenbien family was overwhelmed with text messages, phone calls and e-mails from friends, family and former Cougars players and coaches offering prayers and support for Bree.

On Thursday afternoon the Cougars were back on the practice floor, getting ready for Monday’s Division 4 District game against Ann Arbor Rudolf Steiner.

Coach Salenbien said the girls got in practice, strength training and spent some time reading through some of the messages the team has received over the last couple of days. It’s not business as usual, of course, but don’t expect a letdown once the postseason starts Monday.

“This group is so tough,” Coach Salenbien said. “I just love how fearless they approach challenges.

“One of our themes is ‘Chase the Lion’ which stresses the importance of dreaming big and taking positive risks without fear. The group lives this out.”

Dani, Libby Miller and Caitlin Anderson are four-year starters. Dani – who has signed to play at Hillsdale College next year – has scored more than 1,200 career points, while Miller has made 178 career 3-pointers and Caitlin is nearing 100 career games played. Cara Anderson and Lizzy Scharer both have big game experience as well, having played in an MHSAA Final.

The Cougars plan to approach this Division 4 tournament just as they would with Bree.

The Cougars have played against some of Michigan and Ohio’s best teams this year and are ready for that road to pay off. Lenawee Christian also has something few other teams have – virtually unmatched big game experience.

Like Dani Salenbien said, “It helps when you have been there.”