ADRIAN – How good of a senior year is Kaiya Wall having?

In the fall, Wall again earned all-state honors after leading Adrian Madison to 47 victories, conference and District championships, and she signed a letter of intent to play Division I volleyball after high school.

This winter, her Madison basketball team is 8-0, ranked among the state’s 10 best Division 3 teams by The Associated Press and sitting atop the Tri-County Conference.

What’s more amazing is her best might still be yet to come. Wall figures to be an anchor on a Madison girls track squad that has won 87 consecutive Tri-County Conference dual meets and could be an MHSAA title contender this spring.

“I don’t know if she has a ‘best’ sport,” said Madison track coach Josh Powers. “She is pretty darn good at all three she is playing.”

Wall is one of those rare athletes who can jump from sport to sport without skipping a beat. In the summer, she would split time between summer basketball and travel volleyball.

She is the third-leading scorer on Madison’s undefeated basketball team heading into tonight’s TCC clash with Ottawa Lake Whiteford. She also is one of top defenders on a suffocating Trojans defense giving up just 24.3 points per game. Three of Madison’s last four opponents have been held to 20 or fewer points.

Wall missed basketball season last year due to an injury, but her return this year has solidified the Trojans on the court.

“Kaiya has made a tremendous impact on our team this season,” Madison basketball coach Rick McNeil said. “She is very quick and has become an outstanding defender.”

Wall also has improved on the offensive end. McNeil said that has been the biggest difference for her.

“She has developed her ball handling skills, and we are able to move her to the guard position where she is a match-up problem for many teams because of her height and speed,” McNeil said. “She is an excellent passer and has the ability to hit the perimeter shot.”

Playing volleyball in college was far from a slam dunk decision. She also was recruited for track. 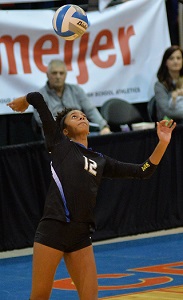 Wall was the Lenawee County volleyball player of the year as a junior and has earned second-team all-state honors three years running. She finished her career just shy of 2,000 kills and signed to play collegiately at Jackson State University in Jackson, Mississippi.

During her career she played in 545 sets, compiling 1,986 kills, 933 digs and 280 blocks – strong numbers for a girl who didn’t play competitive volleyball until seventh grade and only after friends talked her into it.

Her friends made a smart choice. Wall blossomed into a 5-foot-11 outside hitter.

“When I first met Kaiya, she was very raw with so much natural athleticism,” said Kathy Albers, now the head coach at Ypsilanti Lincoln who at one time coached Wall in travel volleyball. “She just needed to be taught and for someone to believe in her – but push her. After her first year of club with us, the talent was so apparent.

“She improved so much faster than most. Her height plus her jumping ability makes her tough at the net, and her quickness makes up for everything else.”

At Madison, Wall played for Dawn Opsal for her first three years and Kelsey Cortright this past season. Cortright stepped into the Madison job and saw first-hand Wall’s athleticism and leadership ability.

“Most importantly, she puts her team before herself,” Cortright said. “She is selfless and encouraging to all those around her, making her a role model for others both on and off the court. Outside of her abilities as a team leader, her athletic ability is remarkable.”

Jackson State coaches noticed that ability before ever seeing her in person. They found out about her by viewing a highlight video she had posted online. They reached out, and she went to Mississippi for a visit and fell in love with the campus and volleyball program.

Another criteria that helped her choose Jackson State was its academics. Wall has a 3.93 grade-point average and ranks 12th in her senior class at Madison.

“I plan on going into pre-med,” she said. “I want to be a trauma surgeon. They have a very good program.”

Had she not become enamored with the volleyball program, she might have been a track signee.

Wall won the Division 3 Finals 100-meter hurdles title as a freshman. As a sophomore she helped Madison win the team championship by finishing second in the high jump. Last year she was ninth in the high jump, second in the 100 hurdles and on the runner-up 1,600 relay team as the Trojans placed seventh as a team.

Powers, who will be inducted into the Michigan Interscholastic Track Coaches Association Hall of Fame next week in Lansing, said Wall is determined.

“She takes advice and works on it,” he said. “I am, and I think she is, expecting her best track season yet.”