Chances are if you played basketball at one of these schools over the last decade or so, you were coached by a very special educator named Bradford. Perhaps not the same Bradford, but it definitely was a member of the Onekama-raised family with a long line of special education teachers.

While growing up on the farm of parents Arden and Lynn in Onekama, the future educators picked up the love of the game of basketball. Some went on to play college ball, and all reportedly did some coaching.

March Madness has always been a lot of fun in the Bradford family.

“Our family has had a lot of success in March Madness, and it is fun to be able to talk about it with each other and with our kids,” said Nathan Bradford, currently the boys basketball coach, athletic director and special ed teacher at Onekama.  “As a player, I also played at the Breslin Center and in the state Semifinals.

“It was an experience that I will never forget,” he continued. “My sisters have also made it to the state Semifinals.”

Nick Bradford joined Nathan’s staff as the junior varsity boys coach. The Portagers ended their season Thursday night with a hard-fought loss to Brethren after leading most of the way.

One of the sisters, April, had a long run as the Bear Lake girls coach. She still teaches special ed there. 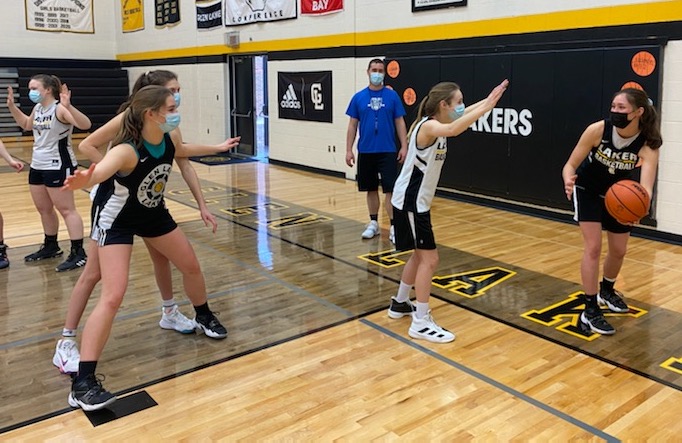 “The one that got into it the most was probably Nate,” Jason said. “We’d go back and forth picking different teams.”

“We were on the living room floor cheering – it was a friendly competitive thing,” he continued. “We were Michigan State fans. Whenever they were in the mix, we were always cheering for them.”

While the father of five doesn’t have the Spartans to root on any longer this year, he does have the Lakers. All the Bradfords will likely be cheering on the Lakers as they try to move on from last season’s abrupt end.

Jason’s oldest son, J.J., is now a freshman in college. He saw his senior season at Glen Lake come to an end with the pandemic outbreak halting tournament play last March as he was preparing for a District Final game.

His daughters, Grace, now a junior, and Maddie, a sophomore, advanced to the Regional Final against Manton last year and were pretty much boarding the bus when things stopped.

Season-ending losses have always caused sleep deprivation for Jason. They have a bigger impact when his own kids are on the team.

“It might be tougher on them,” Jason acknowledged. “Maybe I put more pressure on them. (The season ending) still hurts, but you learn to deal with it.

“You want the success for them,” he continued.  “Maybe I am a little more anxious for games ... it’s the pressure.”

But it is a great and fun time of year, Nathan noted.

“I always look at throwing records aside and showing up, giving it your all because you always have a chance to win during tournaments,” he said. “I have experienced both ends of the spectrum with teams with high expectations and getting upset and teams with nothing to lose and making a run. 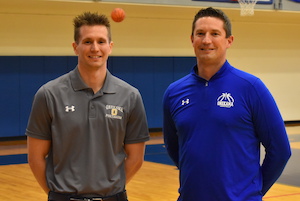 “You always hope your team is peaking at the right time and you can advance in the tournaments.”

Jason and Nathan have never coached against each other. They both have young boys so that could change. The sibling rivalry has presented some competitiveness. 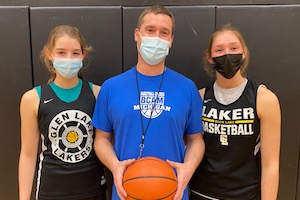 They started coaching girls varsity basketball the same year and their teams were in different conferences at the time. Nathan moved to boys before Onekama and Glen Lake competed against each other in the Northwest Conference.

“We always set up a few (girls) scrimmages and I have to admit that Jason usually got the better of me at that time,” Nathan said. “I would say we really help each other out and talk coaching strategies quite a bit.

“Usually after games we call each other and get the run down on each other's games,” Nathan added. “It helps having another sibling in the family that coaches a varsity sport to talk to and bounce things off of.”

The summer breaks helped lure the Bradfords into teaching so they could help out on the farm. Their upbringing paved their way. Coaching is a bonus.

“While playing I always thought that it would be great to give back to the sport that gave me so many opportunities, and this led to me wanting to become a teacher and a coach,” Jason said. “Our dad taught us great work ethic and discipline growing up on a farm. Our mom is the most patient and caring individual you can meet and would do anything to help another individual.”

Tonight Glen Lake will take the floor without three seniors from last year’s team but with a lot more experience Jason hopes that bodes well for the Lakers.

“I feel we have a little more depth,” he pointed out. “We’re another year older, and it helps with confidence too.”