BLOOMFIELD HILLS – When word leaked out last April that sisters Bailey and Samantha Thomas would be moving to Nevada and not returning to Bloomfield Hills Marian for the 2015-16 school year, reporters and basketball fans alike did a quick math equation.

Marian would graduate three seniors who started plus its top reserve and, with this news, would lose its top six players from a team that won the program’s second consecutive Class A title.

Everyone outside of Marian anticipated a changing of the guard. No longer would the Mustangs be the team to beat in the Detroit Catholic League, and any thoughts of a third consecutive title were dismissed.

That’s not all. Senior McKenna Landis, who would have been a three-year varsity player and the starting point guard, suffered a season-ending knee ligament injury in a non-basketball incident.

Mary Cicerone is in her 33rd season as head coach, and she’s uncertain whether she’s entered a season before where experience, and the amount of seniors, was at such a premium.

But as far as assessing coaches, Cicerone is at the top in maintaining a competitive edge, and thus, a positive outlook.

“Most of my players play more than one sport,” Cicerone said. “Many (five) play soccer. Another plays volleyball. For the first time, basketball is second fiddle to most of my players.

“We’re going to show up. I thought we’d be competitive. What are we, 9-3 now? I thought we should be 10-2. I’m competitive. I have some good athletes. We’re figuring out what they’re good at.”

Marian is 9-2 and, at 6-1, in first place in the league’s Central Division. Its lone division loss was at Warren Regina, 35-33, on a shot at the buzzer. Few would have thought this before the season but, at this point, Marian is the favorite to win the league title. Should the Mustangs win the title, it would be Cicerone’s 13th.

If it happens, it’s not a fluke. Like all of Cicerone’s teams, this one plays defense – and few teams, at least in Metro Detroit, play defense with more intensity than Marian.

Take the Regina game as an example. Marian trailed by 11 points late in the third quarter. The Mustangs forced 10 turnovers in the fourth quarter and nearly shocked the Saddlelites. 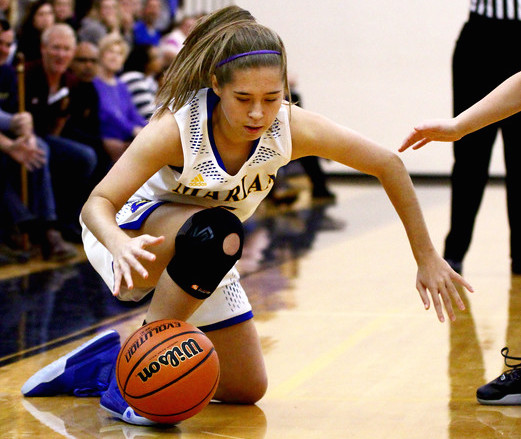 Maria Hickey and Elizabeth Grobbel are the only seniors on the team and quite possibly Cicerone’s hardest workers.

Hickey said it’s up to her and Grobbel to set an example for the younger players. Last season they earned valuable experience during and more so in practice going against the state’s best.

“We returned four players,” Hickey said. “We didn’t know McKenna would be out. We were very underestimated. We adjusted well. We had a target on our back. Everyone wants to say they beat the defending state champs.

“Defense has to be above the offense. Defense takes up 60, 70 percent of our practices. Maybe more. We press some. Our favorite is the man-to-man, full court. We never play zone. (Cicerone) laughs when we bring it up. We also run the 1-2-2 zone press. We call it the mustang. It’s risky. When it works, it works great. It changes things up.

This team doesn’t have a go-to player. Grobbel, a 6-1 forward, might be the team’s top 3-point shooter. Lauren Montalbano, a 5-5 junior, is one of the best at going to the basket. And at point guard, Olivia Moore is a fine ball handler, but she’s a freshman still gaining varsity experience. Uche Ike, a 5-11 sophomore, is a strong and athletic post player but didn’t start playing basketball until the eighth grade and is still learning the fundamentals.

“I told the kids in the beginning that we’re not going to win because we’re great basketball players,” Cicerone said. “It’s our defense that will carry us. Many of them don’t pick up a basketball until November. I ask them, why shoot? You haven’t touched a basketball in months.” 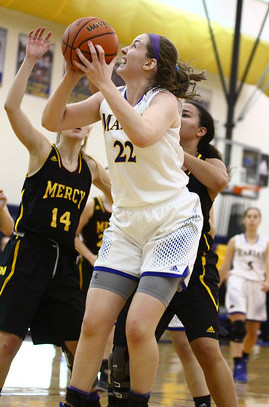 Cicerone is all for her players to play other sports. And it’s these other sports that are their main ones. But it does try her patience when some compete in travel leagues or AAU events so much so they miss a practice here or there, and a game now and then.

On the other side of the coin, playing the other sports does contribute to their athleticism. For a team like Marian that relies heavily on defense, having good, all-around athletes is a plus.

Cicerone knows her team will have a challenge competing with Class A powers like Saginaw Heritage and Southfield-Lathrup in the MHSAA Tournament. But it’s not a stretch to forecast the Mustangs winning another league title, possibly a District title, and pulling off an upset in the Regionals.

Whatever the opposition, no matter how talented they are, Cicerone refuses to give in. Marian has won six MHSAA titles with her on the bench, and a coach doesn’t win that many by taking anything for granted.

“I’ve had my day in the sun,” Cicerone said. “I go up and down with my team. I don’t expect much on offense. But we can play defense.

“We’re not going to do what we’re not good at. We want them to do the things they are good at."