The Performance of the Week has recognized one athlete every week since it’s start during the 2015-16 school year, but splitting up Burger and Clark is impossible. They’ve led the Wildcats to a 103-2 record, and in addition to the two titles also a championship game appearance (and runner-up finish in Class D) in 2015 after they lost only one game as freshmen in a Class C District Final. Both scored 1,000 points during their careers, and Clark also grabbed 1,000 rebounds. This season, Burger, the point guard, averaged 19.1 points and 5.1 assists per game, with 73 3-pointers. Clark, the forward, averaged 16.9 points, 11.6 rebounds and 3.3 steals per game. Clark was named Class D "Player of the Year" by The Associated Press, and Burger also made the all-state first team. Both are 5-foot-9, and both will continue at Hillsdale College – Burger playing basketball but Clark playing volleyball.

They’ve been best friends and teammates since elementary school, and their successes extend past the basketball court. Clark made the Class D all-state first team in volleyball and Burger earned an honorable mention, and Clark won the Lower Peninsula Division 4 Finals discus championship as a sophomore and finished runner-up last season while Burger ran track her first two years of high school and made the Finals as part of relays to end both. Burger carries a 4.0 grade-point average and will be one of four valedictorians this spring, while Clark ranks fifth in her class at 3.98. Burger will major in biology with aspirations of becoming a physician assistant, and Clark will major in business at Hillsdale.

Coach Chris Hodos said: “I’d like to have them for four more years. They’ve done a great job for me, obviously. As freshmen, they were Class C, we lost to a really good team, or else we could’ve gone a little ways there. They’re just great kids. I remember watching them when they were in second grade; they were making left-handed layups in second grade, and you don’t see that, so you knew it was going to be a special group. They want to do everything the right way. … It’s really nice that they’re going (to Hillsdale) because it’s 10 miles from my house, so I can go watch them play at home games. I’m glad they’re both going to a great college, getting a great education, because they’re so smart.”

Performance Point: “I was just so happy to come off the court one last time, and to come off the court and know that we couldn't have done anything more,” Burger said. “There wasn't another game to be played. We came off, we were undefeated, we won the state championship, and there was nothing more we could've done. To know that we left it all on the court and gave every oomph we've got, it’s a great feeling.”

Perfect ending: “It’s been phenomenal. It’s surreal,” Clark said. “Could you ask for anything more? It was perfect. These last two seasons, we have been perfect. And that's doesn't happy very often, and I'm really thankful for my team and everyone; they make me a better player, and I'm going to miss them a lot.” 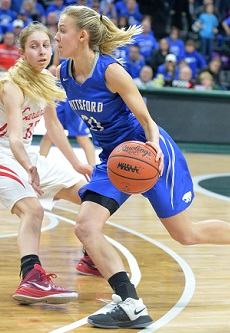 One more time: “Maddie’s my best friend in the whole world,” Burger said. “I’m just glad that our last game together, we could both just come out and perform as best as we could. It's really special that we could do that together in our last time ever playing any sport together.”

Record setters: “I didn't know that we could even be in (the record book) until the tournament started and I was like, 'Whoa, this could be real. We could get that.' It's awesome for us. Our goal wasn't records, but we just want to win.” Added Burger: “We played together for a long time. In junior pro, we won a lot too. We played AAU together all through middle school. We played together ever since the second grade. Accomplishing this record was never something we had in our radar. We never thought, 'Oh, I want to go undefeated all my high school career,' but we did want to win. We're competitors, and that was very important to us. We just practiced hard, and as it became closer, it became a goal. But all in all, we just wanted to win.”

To become champions: “I would say practice. Get in the gym, definitely, do your skills,” Burger said. “Every day we have a 20-minute skill period in practice … so I just think if you’re a little kid, you need to work on your ball handling, layups and try to get your shot so it’s one-handed.” Clark: “And you need to work hard, and believe in yourself.”