PITTSFORD – Pittsford High School girls basketball coach Chris Hodos made a bold prediction prior to the 2013-14 season: He told athletic director Mike Burger that their Wildcats were going to go 20-0.

Pittsford, coming off a 15-5 finish, went on to complete the regular season unbeaten before losing in the Final of the District tournament.

After watching the 2014 MHSAA Class D Final, Hodos made another bold prediction to Burger. He called the athletic director and said, “I’m at the Breslin Center, and I’m telling you right now we can make it.”

Hodos is 2 for 2. Pittsford took a 26-0 record into last season’s championship game and built a 20-point lead on St. Ignace before losing 64-60 in overtime.

Hodos is making no predictions this year. But with the majority of that team back and a sly grin on his face, it is obvious he expects another great season from the Wildcats.

Pittsford is a civil township in Hillsdale County, and the 2000 census listed the population as 1,600. It certainly does not jump off a map when searching for it. The high school has 211 students this year.

Therefore, when someone says he or she is from Pittsford, it could cause confusion. Pittsburgh is a likely misunderstanding.

“I played football at Adrian College, and my buddies would say, ‘I saw your hometown in Detroit,’” Hodos said. “I’d tell them, ‘No, that’s Pittsfield. That’s not it.’ That’s just one of the things I hear.”

Pittsford might be a small dot on the map, but in Class D girls basketball, it is a major player.

Two all-staters are back from last year: juniors Jaycie Burger and Maddie Clark. Burger is a slick point guard who averaged 19 points per game last year and set the school record with 170 assists (with just 51 turnovers). Clark, an athletic player who can do it all, averaged 20 points last year and recently became the first Pittsford athlete to receive all-state honors in volleyball.

Laura Smith, one of two seniors on the team, also averaged in double figures in scoring last year, and center Madison Ayers returns after missing all of last season. She was on varsity as a freshman and started as a sophomore. The other starter is junior guard Madison Dominique.

As such in a small town, most of the girls have known each other since grade school and played sports together most of their lives, and Jaycie Burger believes that has been an asset.

“What sticks out the most is how well our team chemistry is,” she said. “We all get along really well, and when you have a team that gets along as well as we do – we all work really hard in practice and we never let any one of us take a play off – we all really care about each other, and that transfers into everyone working hard on the court.”

The Wildcats aren’t extremely tall, but their quickness and athleticism overwhelm most of their opponents, and they have won many more games by lopsided scores than nail-biters. Burger makes it sound simple.

“We like to play fast, get up in the passing lanes and play good defense, beat their defense down the floor and get a fast break,” she said.

Winners from the beginning

When the girls were in grade school, observers noticed they were good. But nobody would have predicted the sort of success they would have in high school. Not even Jaycie Burger’s father, Mike, the athletic director.

“We knew they were really good, and we knew they loved the game and loved each other, so we thought they had the opportunity to be really good high school players,” he said, “but we never expected that they would do this stuff.” 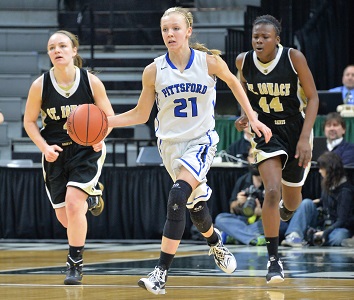 It also presented him with a dilemma. Burger, the football coach, could have coached the girls team but opted for the boys, and he encouraged Hodos, his boys basketball assistant, to apply for the girls job.

“I thought it was not in my best interest to coach the girls,” Burger said. “My son plays basketball, too, he plays for me, but Jaycie needs to be where she can do her thing. She doesn’t need her dad looking over her shoulder. Dad can go sit with the rest of the parents and enjoy the game.”

Jaycie Burger, who plans to play basketball at Hillsdale College after graduation, and Clark, who likely will play basketball or volleyball in college, are in the same grade and attended the same church at a young age.

“We’ve known each other for a long time,” Clark said of Burger. “I’ve played with Jaycee my whole life, and Laura recently, too. I think we started playing in the second or third grade.

“We were beating people all along, but as we got older we just started beating them more and more. We hoped that we would be good, and it has paid off. Being able to play together for that long, we know each other’s abilities and our strengths.”

There really were not too many scares along the way last season as the Wildcats regularly beat teams by 30 or 40 points. But a visit to Breslin was never a certainty, except maybe to Hodos.

“At the beginning of the year, I did not think about playing at Breslin,” Clark said. “As we got farther in the tournament, I could see that it was definitely possible and we could go far, and we did. At times I felt a little pressure that we could be perfect, but in the end I focused more on the game and brushed it off.”

Hodos, who had made the bold prediction of getting to Breslin a year earlier, said the moment that became a reality was something he will never forget.

“When the buzzer rang at Battle Creek Harper Creek in the quarters, and I knew we were going to the Breslin Center, I just remember looking at the scoreboard,” he said. “It was an amazing feeling.”

When the time came for the Semifinals and Final, the team arrived so early for the game that it beat the Fox Sports Detroit television crew, which had hoped to film the girls getting off the bus.

With a 20-point lead in the third quarter, the Class D title felt so close. But as things often happen, it slipped away. Smith said she spent a lot of time re-watching the game on a DVD purchased by her parents.

“Sometimes I just sit in my room and watch it,” she said. “I look at it, and I usually look at myself and see what I could have done better. But as a team we played great, and I wouldn’t really have changed much.

“Last year was probably for me a dream come true because my whole high school career I’ve always wanted to go to the Breslin Center, and last year we made it.”

Smith also said that breezing through the schedule last year might not have been a good thing for the team when it came to the MHSAA Finals. 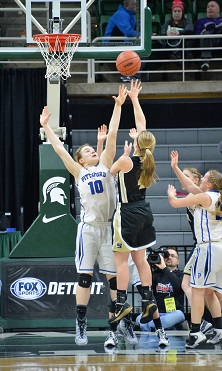 “We weren’t used to playing close games and handling the pressure that comes with it,” she said, “so that’s why Coach has scheduled a lot of teams that will give us more competition. If we get in that situation down the road, we’ll know how to handle it.”

For the athletic director/father Burger, the memory of the excitement and little bit of apprehension prior to the championship game is still emotional. He knew St. Ignace would use an intense defense directed at the play of the point guard – his daughter Jaycie.

“It was an incredible experience. We didn’t win, but it didn’t matter.”

One thing that helped make it such an incredible experience was the community support received by the Wildcats. As more than one person said, “they turned the Breslin blue.” Blue is the primary color of Pittsford athletics.

“When we got to the Breslin and saw everyone there – everyone wearing blue – we actually did turn the Breslin blue,” Smith said. “It was amazing. I don’t think I’ve ever seen so many people from Pittsford in one spot before, and it was great.”

But it wasn’t just people from Pittsford. The Wildcats touched much of Hillsdale County.

“It was fun for the community, and it wasn’t just the Pittsford community; it was everybody,” Hodos said. “Hudson, North Adams, Jonesville people, Hillsdale people, it was really amazing everybody who was there and wearing blue for the Semifinals and Finals.”

A year ago, Pittsford was still Pittsburgh, or Pittsfield, or something else to some people. But now Pittsford wears a big target on its back in girls basketball. The players know that they will get the ‘A’ game of their opponent every night.

“And we will bring ours as well,” Clark said.

The schedule has been beefed up, just like Smith indicated. One of the new teams to the schedule was Grass Lake, which Pittsford defeated Tuesday night 71-62 to bump its record to 2-0. Grass Lake was coming off an 87-point performance in its previous game against Concord.

“We’re always looking for good games,” Hodos said. “We picked up Grass Lake, we’re playing Class A Belleville over Christmas break at the Airport Holiday Showcase. They have 1,800 kids in their school. It will be a big stage for the girls. We also will scrimmage Marshall over Christmas break.

No matter how it turns out, it seems another special season is in store for Pittsford girls basketball and the school of 211 students

“When I look at this team, I see a team that probably will not happen around here again,” Mike Burger said. “They’re the best girls basketball team I’ve seen in this area in my whole life.

“You very rarely get two or three girls of that caliber – it’s usually one really good player. It’s the perfect storm, the perfect time. The kids work really hard. We never thought about getting to the Breslin Center, that was never the goal. It was about playing the game with a passion to play the game and a passion to represent the school and the community.

“Everything just came together. I don’t know how it did, it just did. The parents just let the kids play and let them be kids. It’s the perfect storm. I don’t think I will ever see this again in Pittsford in my lifetime.”

PHOTOS: (Top) Pittsford players huddle in front of their bench and a large cheering section during the 2015 Class D Final at the Breslin Center. (Middle) Jaycie Burger pushes the ball upcourt with two St. Ignace players trailing. (Below) Maddie Clark defends the rim against a Saints shooter.