EAST LANSING – Kent City never lost hope Saturday that it could come back and knock off Ypsilanti Arbor Prep in the Division 3 Girls Basketball Final.

With less than a minute to play, the Eagles’ hope turned into a legitimate chance to do just that, as they had the ball and trailed by just four.

But Kari Woods took it all away.

The Arbor Prep senior guard stole a pass near midcourt and raced for a layup to extend her team’s lead to six points with 30 seconds to play, ending Kent City’s last, best chance, and sealing what ended up a 54-50 win for the Gators.

“I knew the game was tight, and we had been practicing up the line, all day, every day, every practice,” Woods said. “I knew I was there. I saw it and went for it.”

It was the second title for Arbor Prep, which also won in 2016 before finishing as runner-up each of the next two years. 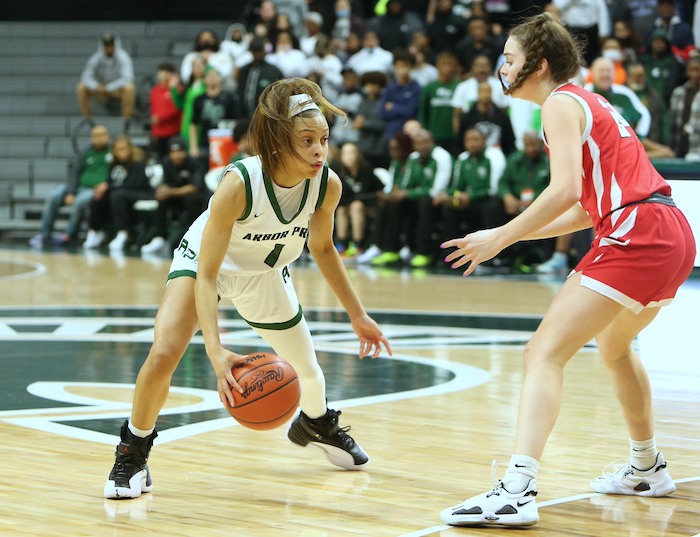 This was the Gators’ first trip back to the season’s final day since 2018, and they made sure to make the most of it.

“It’s difficult to get here,” Arbor Prep coach Scott Stine said. “Six years ago, we won on March 19, 2016, the same day. Six years ago, you would have never told me it was going to take six years to get another one. It is difficult. COVID has played a part in that. For our kids coming back, we just have to keep getting better. They know what it takes.”

“(Kent City) is a great program,” Stine said. “They’re going to be back here again next year. Our goal for the rest of the girls in that locker room is to get good enough to improve enough that we can play them again next year. But I’m just happy. The seniors, all three of these girls at some point made plays to put us where we’re at. Mya, offensively, did what we know she’s capable of. Jazmin made some plays on both ends of the court. Kari Woods made arguably the most important defensive play of the game when she blew up that handoff and took it for a layup. That was a huge play. That’s what she does. Proud of all three of these girls.”

Petticord led the Gators (25-2) with 27 points. She had 20 points at halftime after connecting on seven of her first nine shots, and each of her first three 3-point attempts.

“It was really all about my focus,” Petticord said. “My nerves didn’t get the best of me today. Knowing this was my last high school basketball game, I just had to end it off with a lot of focus. Knowing it was my state championship game for the team – yeah, I was just focused.”

Woods added nine points and four steals, including the big one at the end. She played airtight defense all game against dangerous Kent City guard Lexie Bowers, who finished with nine points and nine rebounds. Bowers came into the Final averaging 17 points per game. Stine credited Woods, calling her the best perimeter defender in the state. 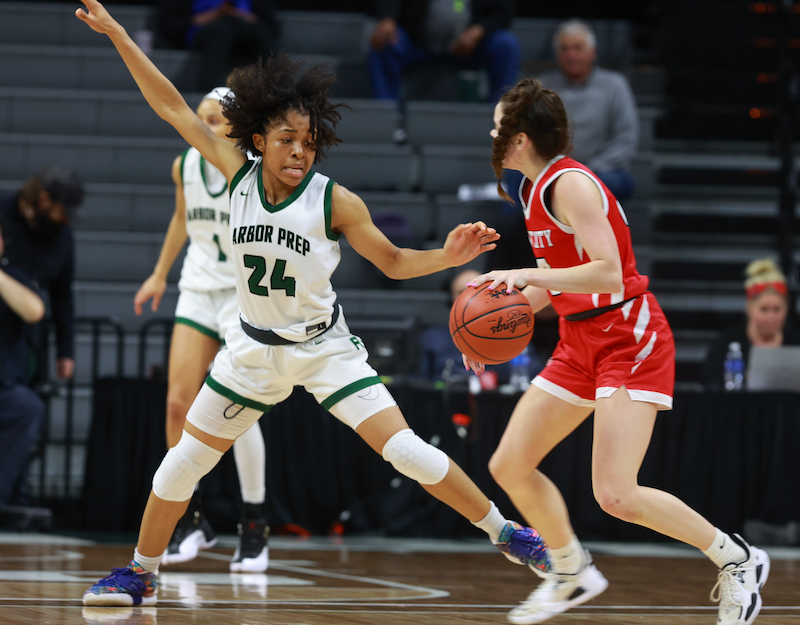 “I think they play really tight, so (Bowers) had a hard time getting herself open off of that,” Kent City coach Aleah Holcomb said.

Arbor Prep’s tight defense frustrated Kent City (26-1) throughout the game, and the team that averages 26 3-point attempts per game could get off only 11 on Saturday. The Gators also forced 15 turnovers.

“I thought we had a difficult time handling their pressure,” Holcomb said. “They really made it difficult for us to get into our offense.”

Arbor Prep led by as many as 11 points late in the second quarter, and held at least a two-possession lead for nearly the entire second half.

But the Eagles never let the Gators fully get away, and cut the lead to as few as three when Madelyn Geers, who totaled a team-high 27 points, scored with 2:15 to play.

They never got the ball with a chance to tie or take the lead, however.

It was the second-straight runner-up finish for Kent City, which lost 52-50 against Grass Lake in last year’s Final.

“It’s frustrating, but I think we worked our butts off this season,” Kent City senior Taryn Preston said. “Obviously God got us here for a reason. I think he’s gifted every single person on the team, and we worked hard to get the best that we can out of our abilities. That’s just something that’s really, really cool to see as a member of the team. So, yeah, it’s frustrating at times, but I know that we worked our butts off to get here.”