EAST LANSING – Carly Andros could have simply gotten back on defense.

The Fowler junior missed the front end of a 1-and-1 with less than two minutes to play Saturday in a game her team had essentially already wrapped up.

But Andros did what Fowler had done throughout its 61-46 Division 4 Girls Basketball Final victory against Plymouth Christian Academy – crashed the boards, secured the offensive rebound and turned an empty possession into a layup.

Fowler dominated the glass on its way to a second-straight Finals title, out-rebounding Plymouth Christian 42-20, including a 15-2 edge on the offensive boards. Fowler turned that into 14 second-chance points, continually turning Plymouth Christian defensive stops into backbreaking scoring plays.

It was the third title for the Fowler program, which had three Finals appearances during the 1990s, including the Class D win in 1991. 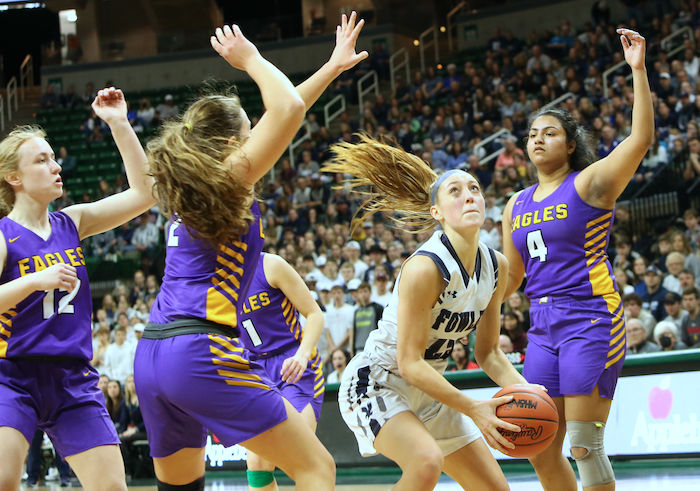 Winning a second straight would have been special on its own, but being able to celebrate with a large contingent of fellow students and fans – which was missing last year because of COVID-19 protocols – added to the experience.

“We are so blessed to have had both of these opportunities,” Fowler senior Mia Riley said. “Even last year when the fans couldn’t come. It was, not really downplayed, but people couldn’t be there and it wasn’t the same environment. To be able to have it this year and to be able to get everything (that was missing) last year just made everything so worth it. It was such a great experience, and I’m so glad to go through it with this group of girls.”

Riley led Fowler with 15 points and 12 rebounds, while her younger sister, Emma, had 14 points. Emma Riley scored her 1,000th career point early in the third quarter.

Grace Epkey added 10 points and 11 rebounds for Fowler. Taylor Weber had nine points on a trio of 3-pointers, and Andros had seven rebounds.

“Understandably so, (the Riley sisters) get so much attention because they’re such fantastic players,” Goerge said. “I kind of said it before, this game was going to come down to our role players, if you will, and all of them stepped up huge. It was a total team win for us tonight. I couldn’t be happier for the girls.” 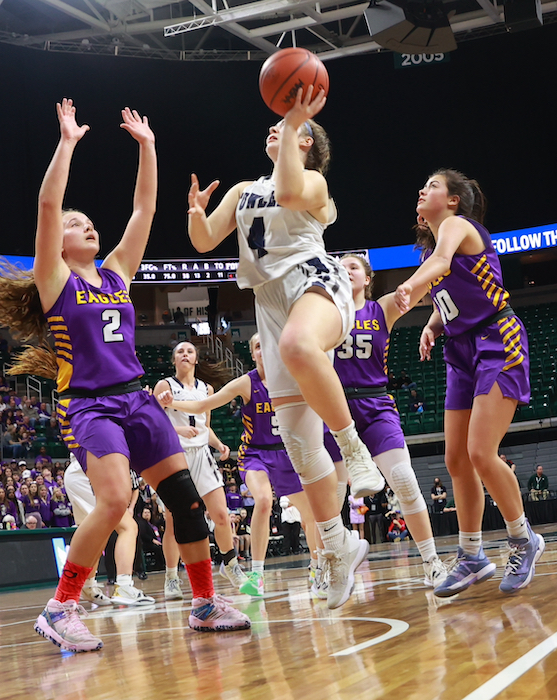 “Our kids came to win,” Plymouth Christian coach Rod Windle said. “There was a little bit of disappointment at the end in terms of what they dreamed for, what they hoped for. Certainly, in reflection when the day is done there will be some rejoicing about the season we had. I’m really proud of the effort these players gave. They’re competitors, they dream big and they got after it tonight.”

Plymouth Christian was within four midway through the second quarter, but a 9-0 Fowler run over the final 2:21 of the half blew the game open.

Weber started it with a 3-pointer, and Mia Riley and Epkey ended it, working for a pair of layups in the final minute to put their team up 27-14 at the break.

Plymouth Christian, meanwhile, went scoreless over the final 4:25 of the half.

Fowler didn’t shoot well during the first half (10 of 30), but grabbed nine offensive rebounds and had seven second-chance points. Epkey had five offensive boards herself in the half.

Fowler also moved the ball effectively and had eight assists on 10 first-half field goals. While piling up twice as many assists as turnovers (four), their defense forced seven first-half turnovers of Plymouth Christian.

That, combined with 5 of 20 shooting, made offense difficult for Plymouth Christian.

“Plymouth Christian is a fantastic team with exceptional guard play, so the challenge was to contain (Fernandez and Houk) and kind of run them off the 3-point line as best we could,” Goerge said. “I’m sure those two had some high-scoring totals, but I thought overall the girls did an amazing job defensively.”

Plymouth Christian got as close as eight points in the third quarter, but each time it did, Fowler had an answer. That included a pair of 3s from Madison Wirth and another from Weber late in the third, with each directly countering big plays from Houk and Fernandez and giving Fowler an 11-point lead heading into the fourth quarter.

“We made some runs that I thought might roll into us coming back, but we got denied by their own runs,” Windle said. “They were able to run back and continue to maintain their lead tonight.”

PHOTOS (Top) Fowler celebrates its repeat Division 4 championship Saturday at Breslin Center. (Middle) The Eagles’ Mia Riley (25) dips into the lane among Plymouth Christian’s defenders including Grace Fernandes (4) and Sophia Arlen-Olsen (12). (Below) Carly Andros (4) gets up a shot as Morganne Houk (2) defends. (Click for more from Hockey Weekly Action Photos.)