In just its fourth year of existence, the Patriots’ program claimed its first title, pulling away from Utica Eisenhower 1,451-1,214 behind junior Ian Wright’s 267 and senior Ian Cain’s 251.

“They’ve been bowling with each other since they were little guys,’’ Franklin coach Dan Hejka said. “We’ve worked very hard over the last four years. We almost got here two years ago, then we had a setback at Regionals last year. This is amazing for the seniors.’’

Said Wright: “We grinded through everything. Our second match we struggled. We had to put up some numbers, even if it meant staying clean and making our spares.’’

Macomb Dakota senior Jillian Lipinski shot 185 in the championship game and got a big boost from sophomore Haylie Patterson to hold off Davison’s girls team 1,222-1,120 and claim a first Finals title since 2015. 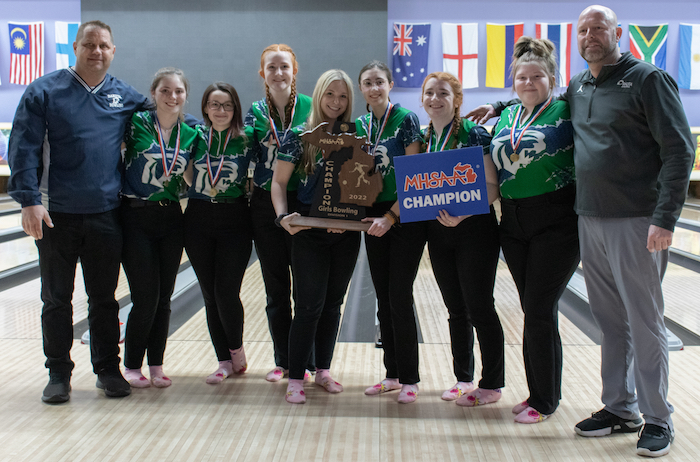 “This is a fantastic experience for me; we really had to fight for it,’’ said Lipinski. “It’s amazing it happened my senior year. Through tough times this year we really rocked it.’’

Patterson – whose father Chris and grandfather Curt are 200-average bowlers in Macomb County – rolled a match-high 223 in the title decider.

Davison’s downfall was 10 straight open frames in the fifth and sixth, ending any chance at a championship. Dakota had only a slim 362-351 lead after the Baker games.

Franklin’s boys advanced to the championship match by eliminating Davison, 1,383-1,278 while Eisenhower beat Midland with a huge number, 1,616-1342.

Midland was the top qualifier in the boys division with a score of 3,748, followed by Franklin at 3,695 and Davison third at 3,563. Macomb Area Conference schools Utica Eisenhower (3,512) and Macomb Dakota (3,504) were fifth and sixth.

Franklin was the first boys team to advance to the semifinals with a 1,460-1,208 victory over seventh-seed Rockford. Davison eliminated Dakota, 1,312-1,284 to advance on the other side of the boys bracket..

Sixth-seeded L’Anse Creuse North knocked off third-seed Zeeland 1,385-1,324 to advance to the semifinals against MAC rival Dakota, which had eliminated Stevenson 1,345-1,087.

Dakota’s girls were 2-0 head-to-head against LCN during the regular season and made it 3-for-3 with their semifinal victory. Davison advanced to the semis with a 1,200-1,148 decision over Grandville, and Farmington edged top-seeded Holt 1,177-1,173 to advance and face the Cardinals.