JACKSON – Grass Lake got to experience a Finals championship in Division 4 last season. And that was something they didn’t want to miss this weekend – regardless of a switch into Division 3 for this winter.

The Warriors may have faced larger opponents this time at Jax 60, but the result indeed was the same as they clinched their second-straight championship and third overall defeating Boyne City 1,357-1,179.

“We’ve had that feeling right from the beginning of the year,” Grass Lake coach Jeff Wyers said. “These boys wanted it bad. It’s been in their system since last year.”

A year ago the Warriors entered match play as the top seed and defeated Farwell in the final by 153 pins.

Grass Lake entered match play as the second seed this time and immediately got a challenge from Portland before prevailing by 21 pins. Then came a 282-pin win over Napoleon in the semifinal before the Warriors swept both the Baker (366-329) and regular game (991-850) portions of the final.

Junior Jack Marshall led three Grass Lake bowlers over 200 in the regular game with a 238, followed by junior Brenton Cochrane with a 228 and senior Sean Wyers with a 208. Senior Michael Deming rolled a 185 to lead Boyne.

Sean Wyers is his team’s only senior.

“We wouldn’t have made it here if everybody hadn’t pitched a little bit in,” he said. “It wasn’t just one of us, it was all of us. Everybody had their time to shine.” 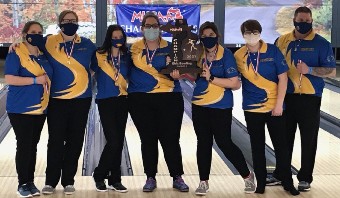 Marjorrie Marlett and her teammates had been waiting to enjoy their own championship as Birch Run last won when these seniors were in eighth grade in 2017.

“I’ve been waiting four years for this, and I finally got it with my team,” said Marlett, who joined the varsity as a freshman. “We were just coming in to have fun and experience states just for states – having fun and enjoying ourselves and putting up a fight and never just getting down.”

“It is just so fulfilling. I’m so proud of the girls,” Birch Run coach Jane Severs said. “They worked so hard and put everything into it. I’m just overwhelmed for them. Their teamwork, and they motivate each other beyond words. They had fun, and they just went out there and screamed and yelled and had a good time.”

Birch Run, the second seed, downed Hudsonville Unity Christian and Jonesville on the way to the championship match. Armada entered match play the eighth seed but eliminated Caro and then Hillsdale to advance.

Senior Samantha Dulz led Armada with a 202 regular game in the final. The runner-up finish was the highest in program history.