A two-time all-stater and last season’s MHSAA Finals singles runner-up in Division 2, Blond is well on her way to building one of the most impressive bowling careers in state high school history. Sunday saw her add to the pile of accomplishments – Blond rolled a tournament-best 749 series including a perfect 300 games at the Flint Metro Championships to earn the Michigan Army National Guard “Performance of the Week.”

Blond is averaging 219 pins per game with a match play record of 20-1 for the Kearsley dynasty – the Hornets have won five straight MHSAA Division 2 championships and carry a 115-match winning streak as they seek their 10th straight undefeated conference finish in the Flint Metro League. Blond made the Division 2 singles quarterfinals as a freshman before last winter advancing to the championship match, where she was edged by Wayland senior Sydney Urben in two-game pin fall 409-356. Her 300 game Sunday was only the fourth in Kearsley’s storied girls bowling history, and she’s also won the two other tournaments she’s bowled in this winter, with a 653 series at the Bay City John Glenn Holiday Tournament and teamed with Lawson Boshaw at the Davison Holiday Mixed Doubles Tournament.

Blond started bowling early, learning from her mother Duwana Ragland and older brother Quinton and sister Quinisha Burnett. Blond still holds the Flint youth city record with an 810 series she rolled as a seventh grader in 2015. She’s anticipating following her siblings into college bowling – both competed at Indiana Tech in Fort Wayne – and is interested in studying elementary education.

Coach Robert Ploof said: “This girl gets it. She is so mature for her age, and she totally understands the team concept and she understands that she needs each and every one of her teammates for her to be successful. She has great sportsmanship as she is always rooting on the competition as well as her own teammates. She is a natural leader and was named a team captain as a freshman; this year she is a co-captain with our only senior on the team Alexis Roof. Imari and Alexis are most likely the best two girl bowlers in the state, and they work well together and both understand their roles. Imari has a very special talent, but if you spoke to her she will not tell you how good she is – she is very humble and in fact continues to work hard to be better. Imari is going places; the college coaches are calling and showing up to watch, she will be offered a big scholarship someplace, but none of that has changed her focus. She is just an incredible teammate and just a great kid, and we are very blessed to have her at Kearsley.”

Performance Point: “I got excited (about the perfect game) because I did joke around with my coach Rob before we even started the game,” Blond said. “I was like, "I'm about to shoot 300 this game" and I actually did, so I was pretty excited about that. I was just kidding around, so I was actually really surprised when I actually did it. … I'm actually very proud of how the year is going. I didn't expect it to be this good, but I started the season off with a pretty good average and I was hoping that I could keep it up there. … Right now, I just try to get better. I feel like I can be better than I am now. I always want to be better than somebody else. I look up to other bowlers like Jordan Richard (of Tecumseh High and now Professional Women’s Bowling Association fame), or other famous bowlers, and I just try my hardest to be like them or be more than them.”

Final step: “I made a really big goal for myself to try to win (the Division 2 Finals) this year. I was ready last year, I thought, but I guess my mindset just wasn't up to where it's supposed to be. I feel like I'm ready this year though. … Thinking too much is really the worst thing you can do, stressing about it. I have my sister as an assistant coach, so she helps out more with my attitude and stuff like that, and not to think too much on things and just do my game.” 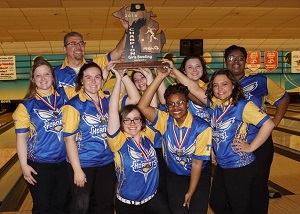 Carrying on the dynasty: “I'm really happy to be welcomed into the (Kearsley) team and welcomed into the winning streak that we have. When we won the state title my freshman year, we were already planning to win the next one the year after. That's just a mindset thing. We already have it set in our minds that we're going to dominate. I honestly think it's the team themselves. If the team doesn't get along, then they won't work together. And I feel like our team gets along very well. Our spirits are always high. Usually when someone bowls badly, there's always someone else to pick you up. And we always compete with each other, so that really keeps us up.”

Following family: “My mom used to bowl in a couple leagues, and she put my brother into bowling and he was just naturally good. We didn't have a lot of coaching. He had to figure stuff out by himself. ... I was 4 when I started, and my mom usually just encouraged me to keep it on the lane and get pins. And then, more as I developed into getting into the technical things, my brother started coaching me a little more (and) my sister got into coaching a little bit.”

Student, also teacher: “I work well with kids. I work at the Richfield Bowling Alley, and I work with kids, teaching them how to bowl. Most of them are just there to be there, but some of them really care about bowling and I like that. So I try to encourage them to do better, to go and practice more and try to get more serious about it. I tell them all the time – you can get scholarship money, you can do big things with bowling.”