CANTON – All Zack Sisk needed was a chance, even as slim as it appeared at the time.

Facing 2021 Division 2 singles champion Kyle Pranger of Grand Rapids Northview in the championship match Saturday at Super Bowl, Sisk – a junior at Gibraltar Carlson – saw Pranger leave a split of five pins in his second-to-last ball of the 10th frame.

Pranger knocked down one more. And that left Sisk an opportunity – if he could throw three strikes in his 10th frame to force a roll-off.

You wouldn’t have known Sisk was facing such enormous pressure, because he rolled three strikes in a row to tie Pranger at 409 and force a roll-off where each bowler essentially redid the ninth and 10th frames.

After each bowled a strike in the new ninth frame, Sisk stayed hot and bowled three straight again in the 10th frame of the roll-off to make it seven in a row.

Pranger answered by bowling two strikes, but left one pin on his third ball of the frame, and Sisk began celebrating the first singles title in the six-year history of Carlson’s program.

“When he got the one, I was just like ‘All right, I’ve got to go up there and throw as many good shots as possible,’” Sisk said. “Obviously I did.”

Tom Sisk, Zack’s Dad and the program’s co-coach along with his wife and Zack’s mother, Kim, said he felt bad that Pranger couldn’t get the tying strike because he threw a great ball.

But Tom Sisk obviously was overjoyed with pride over what his son achieved. 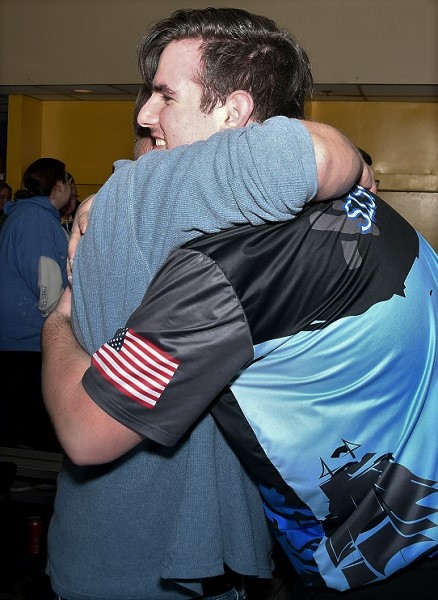 “(Pranger) is such a good bowler,” Tom Sisk said. “When he got that one, we went ‘Oh my gosh, (Zack) has got a chance.’ He had to throw three. Fantastic, and you couldn’t have asked for anything better. He handled the pressure very well.”

In the girls event, Whitehall senior Karli VanDuinen finished off a fine career by claiming the singles title, defeating Wayland senior Bella Harnish in the final 460-381.

VanDuinen advanced to the quarterfinal round last year, used that experience to her benefit in her last MHSAA Tournament.

“It feels good,” said VanDuinen, who will continue bowling at Arkansas State. “I’ve been wanting it since my freshman year. But I’ve been working hard in general for college. To finally be able to win it was a nice send-off.”

Seeded No. 3 after the qualifying block, VanDuinen defeated Chloe Fish of Cedar Springs in the round of 16, 409-310, before squeaking out a one-pin win (357-356) over Livonia Clarenceville freshman Caitlyn Johnson in a quarterfinal.

VanDuinen then downed another Wayland bowler, junior Kadence Bottrall, in a semifinal by a score of 441-385.

“During the qualifying, we thought her throws were looking pretty good,” Whitehall coach Tyson Jasperse said. “She looked comfortable out here. She was reading the lanes really well, and she seemed pretty confident.”

Pranger, who helped lead Northview to the team title Friday, was seeded No. 1 out of the qualifying block Saturday.

Sisk was seeded sixth, starting his journey to the title by defeating Brad Spalsbury of Eastpointe 447-436 in the round of 16.

Sisk then got past Jackson Northwest freshman Logan Jahr in a quarterfinal, 473-423, before edging Owen Williams of Tecumseh in a semifinal by just two pins, 463-461.